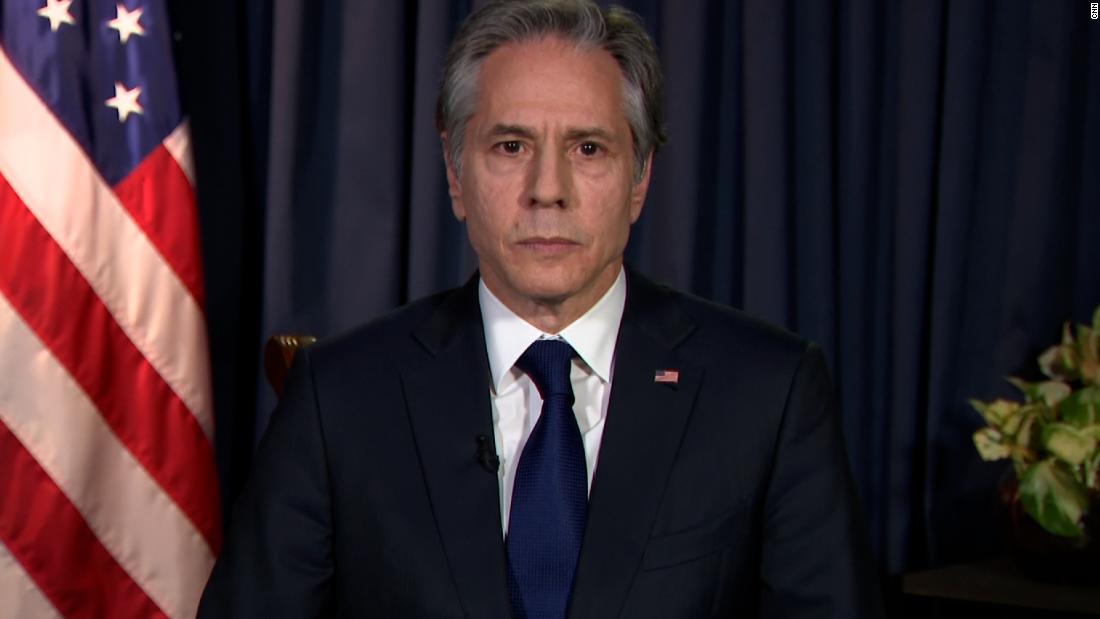 “And what we’re doing right now is documenting all this, putting it all together, looking at it and making sure that as people and the appropriate organizations and institutions investigate whether war crimes have been or are being committed, that we can support whatever they’re doing,” Blinken said. “So right now, we’re looking at these reports. They’re very credible and we’re documents everything.”

The International Criminal Court said last week that it would immediately proceed with an active investigation of possible war crimes following Russia’s unprovoked invasion of Ukraine. The American Embassy in Kyiv said in a tweet Friday that Russia’s attack on a nuclear power plant in Ukraine constituted a war crime, though the US State Department then sent an urgent message to all US embassies in Europe telling them not to retweet the Kyiv embassy’s tweet.
US Ambassador to the United Nations Linda Thomas-Greenfield echoed Blinken on Sunday, saying the US was “working with our partners to collect and provide information” on potential war crimes. “Any attack on civilians is a war crime,” she told ABC News.
Though President Joe Biden and UK Prime Minister Boris Johnson have both said Russian President Vladimir Putin appears to be targeting civilian areas, Biden stopped short last week of saying Putin had committed a war crime.

“We are following it very closely,” Biden said. “It’s too early to say that.”

In its new inquiry, the ICC has said it will look at all actions in Ukraine from 2013 to the present. Russia first entered the Ukrainian territory of Crimea, which it later annexed, in 2014. The ICC was already investigating crackdowns on protesters by a previous Ukrainian government that was pro-Russian. This new referral seems to put all potential war crimes together.

Blinken also told CNN Sunday that the US is willing to accept Ukrainian refugees, though he didn’t say how many the administration would take in.

“Of course, we’ll look at that,” he said when asked if the US would accept any of the more than 1.5 million refugees from Ukraine who have crossed into neighboring countries since the start of the war.

“The United States is committed to doing anything we can, first of all, to support the countries that are bearing the immediate burden of taking in Ukrainians. And then, as appropriate, if people seek refugee status in the United States, of course, we will look at that and I’m sure act on that,” he said.

In his interview with Tapper, Blinken said the US is working with its allies in Europe to look into the possibility of banning Russian oil imports in an effort to further punish the country.

“When it comes to oil, Russian oil, I was on the phone yesterday with the President and other members of the Cabinet on exactly the subject, and we are now talking to our European partners and allies to look in a coordinated way at the prospect of banning the import of Russian oil while making sure that there is still an appropriate supply of oil in world markets,” Blinken said.

The comments come several days after the Biden administration appeared to downplay its openness to sanctioning Russian oil, underscoring the significance of the possibility of taking any unprecedented action against the world’s No. 2 oil producer.

Leaders from both parties have in recent days been calling on the US to cut off its supply of Russian oil, including Republican Sen. Marco Rubio of Florida, who has co-sponsored legislation to ban Russian oil imports.

“We shouldn’t allow Vladimir Putin to have the power at any moment to raise gas prices on Americans by cutting us off at some point now or in the future. So, we should cut him off now and replace it with American oil and have a buffer in between the time that that production starts up and the time that we make the cutoff,” he told Tapper in a later appearance on “State of the Union.”

“And we can use our strategic reserves for that,” Rubio said. “It makes no sense whatsoever to continue to buy oil from Russia that they use to fund this war and this murderous campaign they’re undertaking.”

Sen. Joe Manchin, a moderate Democrat from West Virginia, on Sunday also urged the US to cut off its supply of Russian oil, telling NBC “Meet the Press” that his constituents think “it’s basically foolish for us to keep buying products and giving profit, giving money, to Putin to be able to use against Ukrainian people.”

Manchin and Republican Sen. Lisa Murkowski of Alaska introduced a bill last week to cut off Russian oil and increase US domestic production to make up for it. Addressing the potential economic impact of the proposed ban, Manchin said gas prices are already high and “it wasn’t because of this.”

This story has been updated with additional reaction and background information.