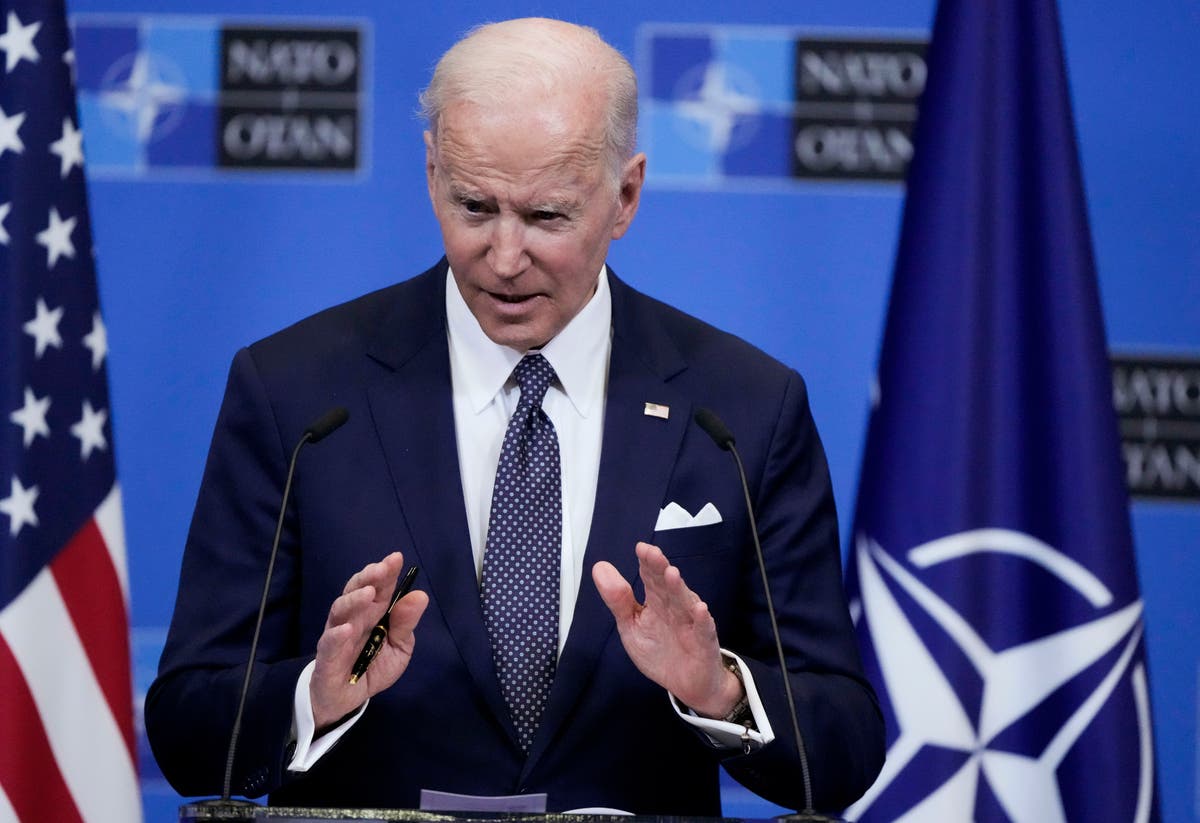 Joe Biden wants Russia removed from the G20, but stressed that it is the organisation’s decision adding that an alternative would be for Ukraine to attend as an observer.

Mr Biden was speaking at a press conference at Nato Headquarters following meetings with leaders of both the alliance and the G7 in an extraordinary day of summits in Brussels over the invasion of Ukraine.

The president said he warned China not to help Russia or risk its economy; there would be an appropriate response to the use of chemical weapons; and that he will likely be visiting refugees at the Polish border.

Mr Biden is now meeting with the European Council in a day focussed on allied unity.

Thursday’s meetings are to coordinate with Nato allies on military assistance for Ukraine, new sanctions on Russia, and the boosting of defences in Eastern Europe. The US has also now officially accused Russian forces of war crimes in Ukraine.

At home, the latest polling shows the majority of Americans want the president to take a tougher stance on Russia, while his approval rating remains unchanged since the beginning of the conflict in Europe.

Speaking in Brussels yesterday, Joe Biden gave the European press some insight into his decision to run for president in 2020 after two failed attempts – and mused that in 2022, he’d be “very fortunate if I had the same man running against me.”

He also explained that his run against Donald Trump was partly motivated by the hatred on display at the deadly Unite the Right rally in Charlottesville in 2017.

“I saw those folks … carrying torches and carrying Nazi banners, literally singing the same vile rhyme that they used in Germany in the early 30s.

“When the gentleman you mentioned was asked what he thought,” the president recalled, “he said they were very good people on both sides.”

At his press conference today with EU Commission President Ursula Von der Leyen, Joe Biden announced the US’s plans to help Europe wean itself off Russian energy supplies, as well as the two parties’ new deal to share data and resources in an attempt to mutually improve their security in the face of an enhanced Russian threat.

The US and EU leaders have announced a deal where American liquid gas supplies will be stepped up to help the continent end any dependence on Russian energy.

The terms of the deal include that the US will deliver at least 15 billion cubic metres (bcm) more liquid natural gas to Europe than under previous plans, and the Biden administration has committed to increase gas supplies in 2023.

Germany and Italy are particularly dependent on Russian gas supplies, and the former is inevitably going to struggle with the consequences of scrapping the Nord Stream 2 pipeline, one of Russia’s key European influence projects and a source of worry for the US and Nato since the Obama administration.

Biden to visit Poland, a complex ally on Ukraine’s doorstep

President Joe Biden’s visit to Poland as his final stop in Europe this week offers a chance to underscore U.S. commitment to protect a key NATO member on Ukraine’s doorstep, and thank Poles for their generous welcome to refugees fleeing Russia‘s invasion.

But Poland is also a complicated ally whose populist leaders are accused by some European partners of riding roughshod over democratic norms, and many liberal Poles will be seeking a sign that the U.S. remembers its role in promoting democracy.

US President Joe Biden says he warned Chinese leader Xi Jinping that taking any steps to aid Russia’s unprovoked invasion of Ukraine would put him and his country in “significant jeopardy”.

Speaking from Nato headquarters in Brussels, Mr Biden was asked if he has seen any indication that China will or will not intervene in the conflict to aid Russia.

The president did not respond directly, but instead referred back to the two-hour conversation he had with Mr Xi last week.

Joe Biden snapped at a CBS News reporter who questioned why new sanctions would have an impact on Russia changing course in Ukraine when previous sanctions failed to deter an invasion.

“That’s not what I said. You’re playing a game with me,” Mr Biden responded during a press conference in Brussels.

Journalist Christina Ruffini had asked how more sanctions would help in Ukraine when “deterrance didn’t work”.

The US State Department has announced fresh sanctions on entities and people in North Korea after Pyongyang conducted the first test of an intercontinental ballistic missile (ICBM) in five years.

The people and organisations accused of “transferring sensitive items to North Korea’s missile program” have been sanctioned, according to a State Department statement.

“These measures are part of our ongoing efforts to impede the DPRK’s ability to advance its missile program and they highlight the negative role Russia plays on the world stage as a proliferator to programs of concern,” the statement said, using the official acronym for North Korea.

Representative Alexandria Ocasio-Cortez said that president Joe Biden is risking the complete “collapse” of his support among young voters and progressives and this could be a concern as mid-term elections are approaching.

Speaking to NY1, she said all is not lost as Mr Biden can bounce back if he delivers some of his promises, including cancelling student debt.

“We need to acknowledge that this isn’t just about middle of the road, increasingly narrow band of independent voters,” Ms Ocasio-Cortez said.

“But, this is really about the collapse of support among young people, among Democratic base, feeling like they worked overtime to get this president elected and they aren’t necessarily being seen,” she said.

“It is Biden’s power and ability to cancel student debt, and nobody else’s.”

What Russia said about expulsion from G20

Kremlin described pressure to remove Russia from the G20 summit in Indonesia as “blatant and undiplomatic” and reminded that it was a multilateral format.

“It is a well-known fact that the US exerts blatant and undiplomatic pressure on all states regarding all-encompassing countering of our country,” Kremlin spokesman Dmitry Peskov said on Wednesday.

“As for G20, it is a multilateral format, different opinions exist there. It is clear that the Americans will continue pressing various states, but, as we see, a number of states prefer to adhere to their own independent, sovereign point of view,” the spokesman added.

Joe Biden has pitched for Ukraine to be welcomed at future G20 meets and suggested ousting Russia.

First Lady Jill Biden appeared on Sesame Street and talked to fuzzy puppets about the importance of kindness. Somehow, a number conservatives found this objectionable.

The children’s show posted the cameo on its Twitter account on Monday. In the video, the first lady introduces the word of the day: “Kindness.”

“When we do things for others, it makes us feel good too,” Ms Biden tells Elmo and two other Muppets. “It’s important that we are kind to every person, monster, animal, and the environment.”