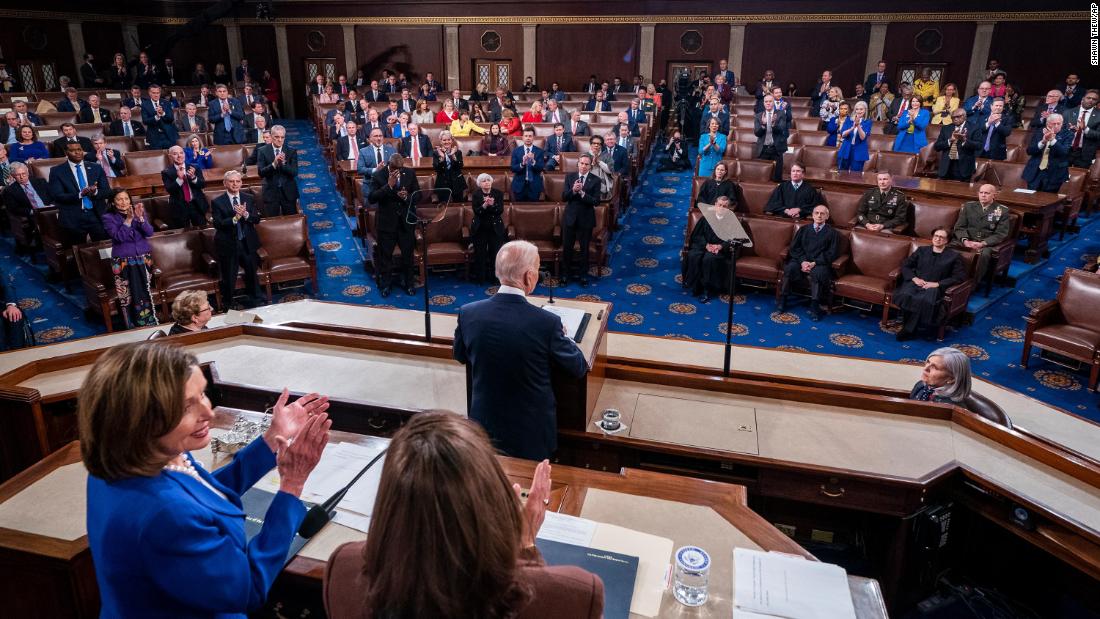 “Now is the hour, our moment of responsibility. Our test of resolve and conscience, of history itself. It is in this moment that our character is formed. Our purpose is found. Our future is forged,” Biden said in closing.

“Well, I know this nation. We will meet the test. To protect freedom and liberty, to expand fairness and opportunity. We will save democracy. As hard as these times have been, I am more optimistic about America today than I have been my whole life,” he continued.

The President said, “The state of the union is strong, because you, the American people, are strong.”

“We are stronger today than we were a year ago,” Biden said. “And we will be stronger a year from now than we are today. Now is our moment to meet and overcome the challenges of our time. And we will, as one people. One America. The United States of America.”

Speaking to political leaders in Washington, Biden began the address by underscoring unity against Russia within the US and among its allies.

Amid such a crucial time for global politics, Biden sent a message to the world: The West is united in its response to Russia’s invasion of Ukraine and condemns the Russian leader for his aggression. And he also encouraged all in the chamber to show that support with a resounding standing ovation and said the US and its allies have “an unwavering resolve that freedom will always triumph over tyranny.”

Biden argued that Putin’s aggression had only made the world’s democracies strengthen their resolve to counter rising autocracies.

“Six days ago, Russia’s Vladimir Putin sought to shake the foundations of the free world, thinking he could make it bend to his menacing ways. But he badly miscalculated,” Biden said. “He thought he could roll into Ukraine and the world would roll over. Instead he met a wall of strength he never imagined. He met the Ukrainian people.”

The President also boasted of the West’s unanimity in the face of Russia’s aggression, saying their united front is “inflicting pain on Russia and supporting the people of Ukraine” and “choking off Russia’s access to technology that will sap its economic strength and weaken its military for years to come.”

“Putin’s latest attack on Ukraine was premeditated and unprovoked. He rejected repeated, repeated, efforts at diplomacy. He thought the West and NATO wouldn’t respond. He thought he could divide us at home, in this chamber and in this nation. Putin was wrong. We were ready,” Biden said.

“We spent months building a coalition of other freedom-loving nations from Europe and the Americas to Asia and Africa to confront Putin. I spent countless hours unifying our European allies. We shared with the world in advance what we knew Putin was planning and precisely how he would try to falsely justify his aggression. We countered Russia’s lies with truth. And now that he has acted the free world is holding him accountable.”

The President celebrated the impact actions will have on “Russian oligarchs and corrupt leaders who have bilked billions of dollars off this violent regime no more.”

“We are joining with our European allies to find and seize your yachts, your luxury apartments, your private jets. We are coming for your ill-begotten gains,” he said.

He also asserted that “Russia’s economy is reeling and Putin alone is to blame.”

Putin, for his part, was not expected to watch the speech, according to Kremlin spokesperson Dmitry Peskov. “The President usually does not watch TV addresses,” Peskov said in response to a question from CNN.

As Tuesday unfolded ahead of Biden’s primetime speech, the President, his administration and its allies have made it clear that Ukraine has been top of mind.

The US and its allies announced early Tuesday that they have agreed to a release of 60 million barrels from their reserves, the White House and International Energy Agency, as leaders seek to dampen the effect of Russia’s invasion of Ukraine on gas prices at home. Vice President Kamala Harris held five separate calls with European leaders and Biden held a half-hour call with Ukrainian President Volodymyr Zelensky.
Biden acknowledged that many Americans are worried about how gas prices are being affected by the war.

“I know the news about what’s happening can seem alarming. But I want you to know that we are going to be OK,” he said. “When the history of this era is written Putin’s war on Ukraine will have left Russia weaker and the rest of the world stronger.”

A return to domestic concerns

Through the remainder of his speech Biden delivered a more traditional State of the Union address — pitching his domestic agenda to the American people for the upcoming year and calling on Congress to approve a number of his proposals which have stalled despite Democrats’ control of both chambers.

He tried to highlight areas of bipartisan unity across a number of policy issues, and in the context of the pandemic and the state of the economy — two of the largest issues on Americans’ minds — the President sought to relay a sense of empathy and understanding.

The President used the speech to celebrate last year’s passage of his first two major legislative agenda items, the American Rescue Plan and the bipartisan infrastructure law, as well as their effects on Americans. In addition, he repeatedly called on the audience of lawmakers in the room to move on his stalled priorities, such as passing the laundry list of items from the Build Back Better social spending bill and confirming his Federal Reserve nominees.

Biden outlined his plan to emerge from the Covid-19 pandemic, calling for a bipartisan “reset” from the polarization of the last two years as the nation begins the return to normal.

He acknowledged that Americans are “tired, frustrated, and exhausted” with the pandemic, highlighting the US Centers for Disease Control and Prevention’s recently updated mask guidelines, which show that “most Americans in most of the country can now be mask free,” and outlining steps the US will take to “move forward safely.”

“Thanks to the progress we have made this past year, Covid-19 need no longer control our lives,” he added. “I know some are talking about ‘living with Covid-19.’ Tonight — I say that we will never just accept living with Covid-19. We will continue to combat the virus as we do other diseases. And because this is a virus that mutates and spreads, we will stay on guard.”

In another area that has affected everyday life, the President sought to recalibrate his economic message to acknowledge the hardships many Americans are facing, saying, “The pandemic has been punishing. And so many families are living paycheck to paycheck, struggling to keep up with the rising cost of food, gas, housing, and so much more. I understand.”

“(W)ith all the bright spots in our economy, record job growth and higher wages, too many families are struggling to keep up with the bills,” Biden said. “Inflation is robbing them of the gains they might otherwise feel.”

In remarks meant to address a concern of Americans across the nation, Biden said his plan to fight inflation would include investing in jobs at home, allowing Americans to get back to work while also making more of the products needed domestically.

“Lower your costs, not your wages. Make more cars and semiconductors in America. More infrastructure and innovation in America. More goods moving faster and cheaper in America. More jobs where you can earn a good living in America. And, instead of relying on foreign supply chains — let’s make it in America,” Biden said. “Economists call it ‘increasing the productive capacity of our economy.’ I call it building a better America. My plan to fight inflation will lower your costs and lower the deficit.”

The President revealed what he called “a Unity Agenda for the Nation” — a broad-sweeping list of efforts with four main points: beat the opioid pandemic, take on mental health, support veterans and end cancer.

Biden highlighted efforts his administration has taken to reduce gun violence, reiterate his call on Congress to pass “common-sense gun violence legislation that will save lives,” and urge Congress to pass his proposed budget, which includes hundreds of millions in funding for community violence intervention programs and community policing, according to a White House official.

Despite the President’s efforts to unify Americans in his speech, the night was not without politically contentious moments.

Several Republicans boycotted the speech over a Covid testing requirement. As Biden was discussing the border and immigration, at least one person in the chamber was heard chanting, “Build the wall.” And as he paid tribute to members of the armed forces who were sickened by burn pits, Biden was interrupted by Colorado Republican Rep. Lauren Boebert, who audibly interrupted, “You put them there — 13 of them” — an apparent reference to soldiers killed during the withdrawal of US troops from Afghanistan. She was quickly shushed by lawmakers.

As is tradition, first lady Jill Biden has invited guests that represent policies and themes the President will talk about during the speech, her office said. This year’s invitations included Ukraine Ambassador to the US Oksana Markarova, along with educators, a union representative, members of the tech community, an organizer of Native American causes, a health care worker and a military spouse have also been invited to sit with the first lady in her box above the dais.

Commerce Secretary Gina Raimondo was the designated survivor for Tuesday’s address, meaning she was the member of the Cabinet assigned to remain outside the House chamber during the State of the Union in case disaster strikes.

This story has been updated with additional developments on Tuesday.