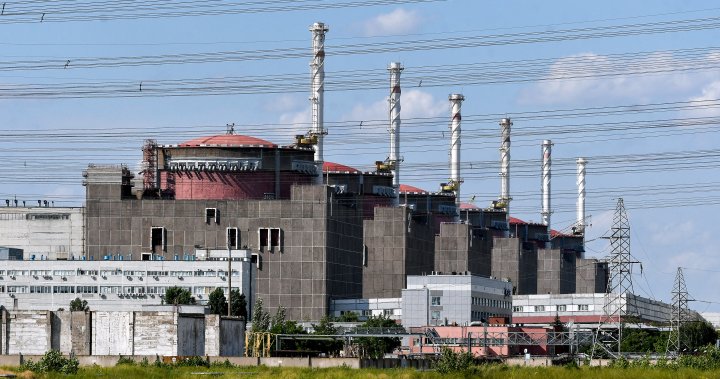 Russia’s attack on Europe’s largest nuclear power plant in Ukraine early Friday has raised fears of a disaster that could impact all of central Europe for decades.

The shelling on Zaporizhzhia — located near the town of Energodar — has resulted in at least one fire which was extinguished by local firefighters, according to Ukrainian and UN officials.

Just over a week earlier, Russian forces captured the Chornobyl nuclear power plant, a site responsible for a botched security test that sent clouds of nuclear smoke across much of Europe in 1986, now known as the worst nuclear disaster in history.

So why are Russian forces attacking Ukraine’s nuclear power plants?

These attacks are about the seizure of national infrastructure, according to Allen Sens, a professor in the department of political science at the University of British Columbia.

“Remember, a stated Russian objective is to conquer Ukraine and bring Ukraine back into the Russian orbit so there’s also some interest in maintaining some critical infrastructure.”

Although, “one of the stupidest things anybody could do is bring fire onto a nuclear power plant,” he said. If Russia were to control Ukraine’s nuclear reactors, they would also be controlling much of the country’s power, Sens added.

Last year, Ukraine got over 50 per cent of its electricity from nuclear reactors, according to M.V. Ramana, a professor at the University of British Columbia’s school of public policy and global affairs.

“Ukraine depends a lot on nuclear power,” he said.

It would not be in the interest of Russia for a major accident to happen at a Ukrainian nuclear power plant as a substantial amount of radioactive fallout could go fall back into their country, according to Ramana.

“These assets have value themselves, rather than being something you’d want to destroy,” Sens said.

When it came to Chornobyl attack, Russians targeted this closed plant because of its relation to the capital of Ukraine, he added.

“They went through there because that was an important land corridor towards Kyiv,” Sens said.

Outside of the reactor at the Zaporizhzhia plant, and most other reactors worldwide, are spent fuel rods stored outside of the containment vessel, Sens explained.

These highly radioactive rods, consisting of enriched uranium, are used to power the reactor, he said.
After being used in the nuclear power process, these rods are not stored in a protective way — creating the potential for a “very dangerous” situation, he said.

“If ammunition was to fall intentionally or by accident and breach whatever building they happen to be stored in, and that radioactivity is released, it could lead — depending on the wind conditions that day — to a widespread contamination over a wide area,” he said, also noting the importance of a secure energy supply to the Zaporizhzhia plant to ensure safe operations.

There’s a lot that goes into making sure things run smoothly, Marina Freire-Gormaly, a professor in mechanical engineering at York University’s Lassonde School of Engineering, explained to Global News.

It’s also important for the staff who are trained to operate the nuclear power plant to remain able to do so, Freire-Gormaly added.

“These staff have been trained for many years. They’ve gone through a series of very systematic training,” she said, noting in Canada, nuclear power plant staff who work in the operating room will have gone through four to six years of training.

Experts including Freire-Gormaly say it’s possible for other nuclear plants in Ukraine to be attacked by Russian forces.

“In a wartime situation, the aggressor usually wants to control the power and be able to create a lot of chaos by having blackouts to the community,” she said.

How to keep a nuclear power plant safe

Rafael Mariano Grossi, director general of the International Atomic Energy Agency, also known as the UN’s nuclear watchdog, has laid out a number of elements that must “never be compromised if one is to ensure safety and security at any nuclear facility.

The points include physical integrity, the maintenance of all safety and security systems, the ability for staff to fulfill duties, off-site power, availability to the supply chain, radiation monitoring systems and communication.

“No country disagrees that these principles must be maintained. However, the first of this, the physical integrity of the plant, has been compromised with what happened last night,” Grossi said during a press conference Friday while speaking on the attack of the Zaporizhzhia plant.

Grossi also offered to travel to Chornobyl in order to negotiate with Ukraine and Russia to try to ensure the security of Ukraine’s nuclear sites.

In 1981, Israeli forces attacked Iraq’s Osirak nuclear reactor. Ten Iraqi soldiers and one French engineer were killed during the airstrike, according to the George Washington University National Security Archive.

“It’s been done in the past and the fact that Israel was never censored for that is a bad precedent for this,” Ramana said.

The health impacts arising from the Ukrainian refugee crisis

History could also repeat itself if the Zaporizhzhia plant in Ukraine is forced to use their less reliable backup diesel generators should their off-site energy supply be cut. This is how a disaster at Japan’s Fukushima plant in 2011 took place, Ramana explained.

A massive earthquake and tsunami destroyed cooling systems, triggering meltdowns in three reactors during the incident.

“We are currently in a state of enhanced monitoring in keeping with our emergency plan,” the commission said in a statement on Friday. “It is important to note there is no immediate radiological threat to regions surrounding these facilities or to Canadians.”

A recent round of Canadian sanctions against Russia also targeted the countries energy sector.

“These measures are intended to put further pressure on Russia’s leadership to cease its violations of Ukraine’s sovereignty and territorial integrity,” they said.