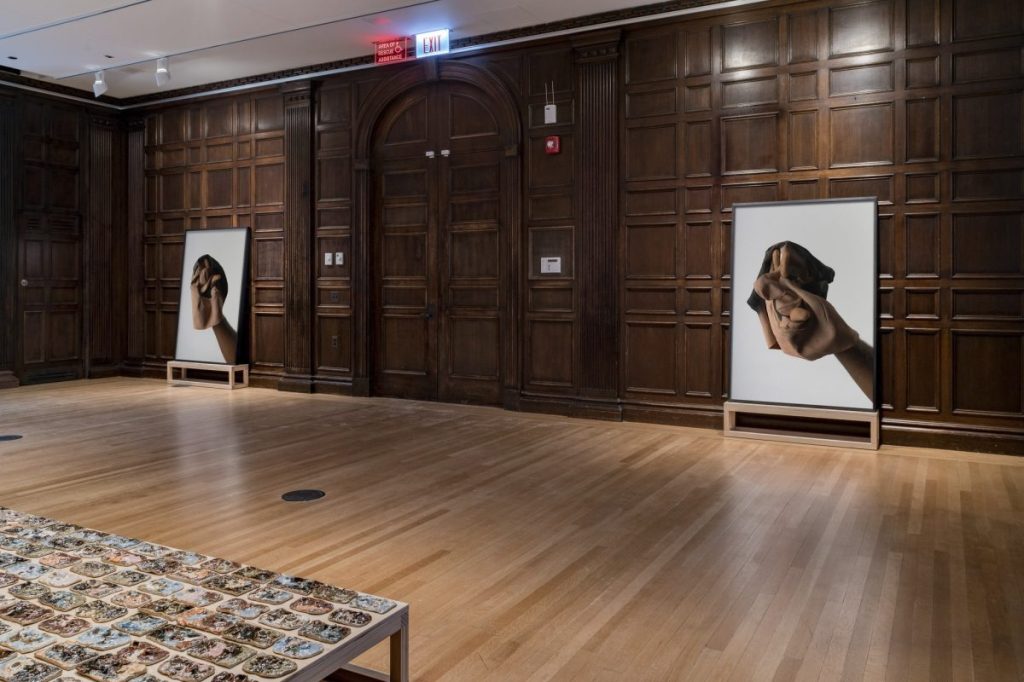 Over 15 years ago, Chicago-based artist Arnold J. Kemp bought a rubber mask bearing Fred Flintstone’s face from a street vendor in downtown New York on Halloween night. Years later, Kemp would rediscover the mask in his studio, and it eventually became a fixture in his artistic practice. His 2016 sculpture Headless shows the cartoon character’s hollow head—lazy-eyed and bulbous-faced—painted silver and mounted on a metal stake. “I tend to collect things and I just have a feeling I will use them one day in a work,” he said.

Since the ’90s, Kemp has been fixated on masks and other modes of disguise, tapping into a sense that “masking up can in fact be much more revealing than intended,” said Dieter Roelstraete, the curator of Kemp’s current exhibition at the Neubauer Collegium for Culture and Society at the University of Chicago.

Kemp’s practice has long explored themes around identity, stereotypes, and general ideas of “sameness,” all fueled by the disparate objects he has collected from various places he’s lived—San Francisco, Oregon, New York, Richmond, and Chicago, where he moved in 2016 to become dean of graduate studies at the School of the Art Institute of Chicago.

An exhibition in 2021 at JOAN gallery in Los Angeles, titled “False Hydras,” drew on a series of encounters in which he’d been mistaken for another writer with whom he shares a name. For the project, Kemp collected copies of the other Arnold Kemp’s 1972 tome Eat of Me, I Am the Savior, which tells the story of a young Black revolutionary, and placed them indiscriminately into crevices of a sleek midcentury chair. For a series made in the early 2000s, he photographed himself donning a mock Ku Klux Klan hood made from fabric styled after West African textiles.

“We are always moving in an out of masks. People call it code-switching now,” Kemp told ARTnews in an interview, adding that his works interrogate collective shifts of “people looking alike, acting alike, and a very particular male genre of that sort of cloning.” With materials often coming to him through chance encounters, Kemp says it begs the question of whether the archetypes he explores are “found or created and cultivated.”

In “Less Like an Object and More Like the Weather,” on view through April 10, the Flintstone mask reappears, visible in two large-scale photographs from the 2019 series “Funny House (Speech Acts)” that are mounted opposite each other at the gallery’s entryway. On the opposite side of the dark-wood-paneled room sits a meticulous collection of 500 individually sculpted ceramic masks, neatly organized on a makeshift stage that spans nearly 20 feet and rises just a few inches off the ground.

In the pair of photographs, the age-weathered Flintstone mask folds over Kemp’s own balled fist, forming a ghoulish expression. Here, as with previous work, Kemp uses this object as a proxy to explore larger tropes of a bygone era. Fred Flintstone, who made his debut on ABC in 1960, is part of a long line of male comedic personas with a chauvinistic flare—first popularized in Jackie Gleason with his two shows in the ’50s and passing on to the likes of Archie Bunker in All in the Family, George Jetson, and Homer Simpson. Kemp describes as the archetype as the “bigoted everyday man that we are supposed to think is funny.” But, Kemp warned, he “can be very dangerous.”

For Kemp, the mask in each photograph represents a hindrance to speech by blocking its handler’s ability to verbalize something troubling. “The hand is not passively wearing the mask,” he said. “It’s actually moving it, like it’s trying to speak through it or it’s trying to say something that is difficult. There is a loss of language, and it almost ends up like a kind of a sign language.”

Pairing the mask with his own Black hand, Kemp said, is a way to upend expectations the viewer may have of the various “personages that the Black artist could inhabit.”

“Some of its power surely derives from the slightly stoic, restrained mood of the work’s presence in the gallery,” Roelstraete said. He and Kemp worked together for several months to compose the exhibition, which takes a minimal layout, with photographs propped against walls and close-to-the-ground floor installations, in an overall ornate space.

“I wanted to engage the floor space of the gallery,” Kemp said. “What can be hung on the walls of the space is very limited. The photographs have always had a sculptural feel for me.”

Across the room, where the show’s other focal point sits, is a collection of handmade ceramics that Kemp produced in the style of domino masks, which only cover the eyes. The installation, titled Looking at the Sun (2021), shows glossy versions of these face coverings, each made coarse by Kemp’s finger imprints and painted in varying cool-toned hues—purple, blue, green.

For Kemp, the ceramic masks give the effect of a personified body, making the viewer feel as if they’re being watched.

“There are all of these eyes in the exhibition that are actually looking at the viewer,” Kemp said. “You’re not really sure what you’re looking at, you see the stage and you see the colors, but it doesn’t come into focus really until you’re almost right on top of it.”

Kemp’s interest in masks, or anything that might cover one’s face, long predates the pandemic, and Covid-related masking wasn’t on Kemp’s mind in the making of this exhibition. Roelstraete, however, sees some correlations.

“Looking at the ceramic ‘masks,’ you are in some way reminded of masking’s many conflicting meanings,” he said. “You are tempted to start thinking about the dialectic of looking and being looked at, and how much of the human affront of two years’ worth of Covid-driven restraints and restrictions may have something to do with the fact that we can’t quite see or read each other like we used to.”

There are only a few works on view in the show, and Kemp said that, in true Cage-like fashion, a visitor ends up becoming a component of the installation: “It needs the viewer to complete the meaning,” he said.