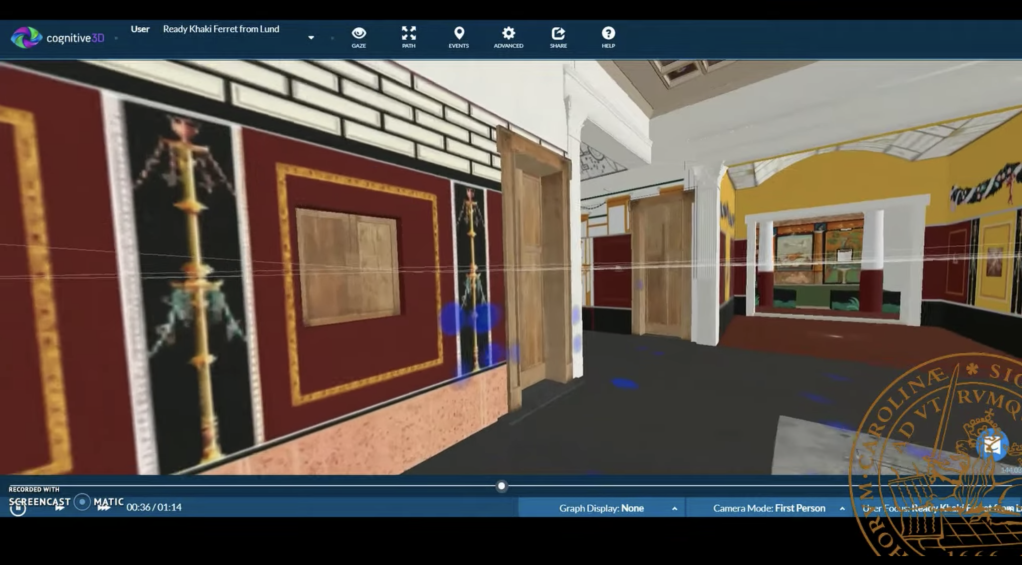 Archaelogists recreated a Pompeia villa destroyed by the eruption of Mt. Vesuvius in 79 C.E. using virtual reality technology to better understand how visitors would have seen the ancient home, according to the recently published paper in the archaelogy journal Antiquity.

The researchers carefully created a digital model of the ancient home known as the House of the Epigrams, a villa excavated in the 1870s and so named because it contains mythical paintings accompanied by Greek epigrams.

While the owner of the house is impossible to know for sure, researchers have suggested it may have belonged to a Lucius Valerius Flaccus due to a signet ring bearing his sigil being discovered there. Regardless, the home’s lavish decorations and numerous impressive frescoes indicate it belonged to an important patrician family.

The paper, titled “Re-viewing Pompeian domestic space through combined virtual reality-based eye tracking and 3D GIS,” was written by PhD. candidate Danilo M. Campanaro and Professor Giacomo Landeschi, who are both affiliated with the Department of Archaeology and Ancient History, Lund University, Sweden.

Here’s the VR experience in action, courtesy of Haaretz:

Using eye-tracking movements, researchers have been able to ascertain what kind of decorations naturally draw the eye of those who explore the villa. Volunteers virtually walked through the 3D house which had two different lighting options, dawn on the winter solstice or noon on the summer solstice.

The eye-tracking technology kept track of three different data points: “Gaze (accurate tracking of the head position of the user); fixation (detailed understanding of what users are focusing on when their eyes are relatively stable, where the stable point is called ‘fixation’); and event (duration, beginning and end of a single session),” wrote Campanaro and Landeschi.

Using this data, the researchers were able to create a map of visual impressions, with smaller red dots connoting brief engagement and larger red dots showing deep engagement. Such data, according to the researchers, may help reveal the different ways the villa and its opulent decorations were viewed by regular people, its residents, and more important guests.

Though conclusions about the data collected are reserved for an upcoming paper, the researchers did reveal, in an interview with Haaretz, some preliminary thoughts. First, only the front of the house was visible to the public, and the deeper one penetrated, the closer to the family one would have to be. It seems that the best decorations, paintings, and other visual stimular was reserved for the owner’s inner circle, displaying sophisticated Greek wares that catch the eye.