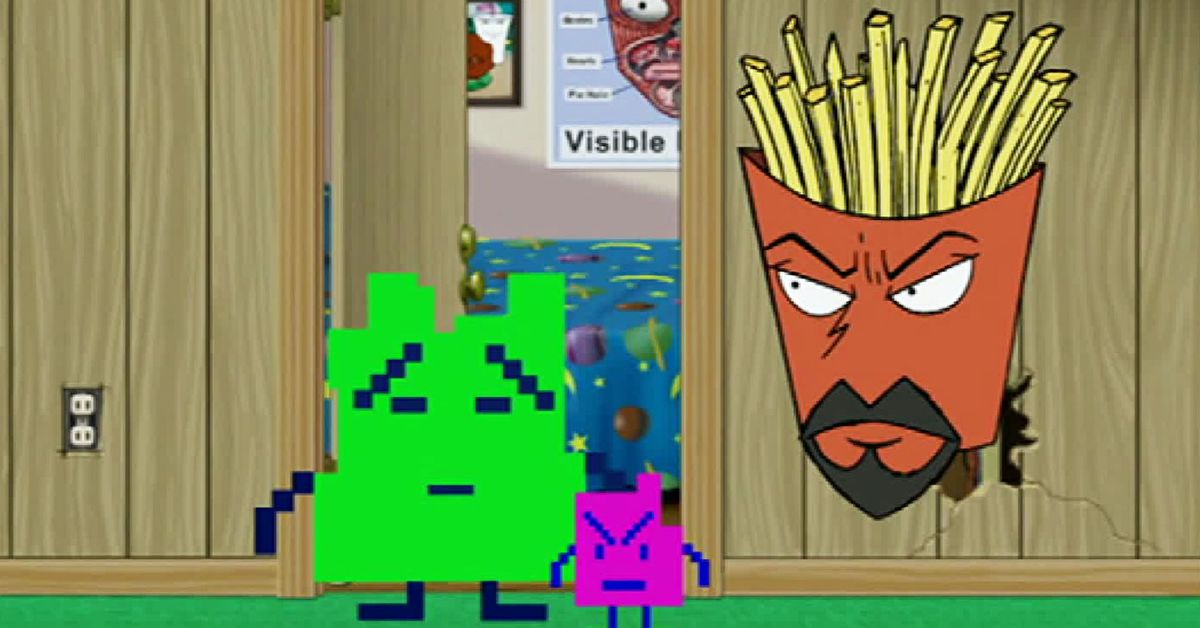 At around 8 a.m. on Jan. 31, 2007, the worlds of surreal late-night comedy and post-9/11 War on Terror came crashing together in Boston. That morning, the Boston Police Department bomb squad’s answered a call from the Massachusetts Bay Transportation Authority (MBTA), which was now on alert. The MBTA was responding to a passenger’s call about a sign they had noticed in Sullivan Square, near Mystic River.

The caller reported a set of flashing glowing lights in a strange shape — what appeared to be a middle finger. Within hours, the police had closed off parts of the I-93 highway and the MBTA, and the reports of the placards started popping up all over the city. Several of the city’s main traffic arteries, like the Longfellow Bridge and the Boston University Bridge, were cordoned off. So were the Red and Orange lines of the MBTA’s subway. Soon, local agencies began coordinating with the federal government, and the U.S Coast Guard blocked passage on the Charles River, cutting off access from the Charles to the Boston Harbor.

It wasn’t until 2 p.m. that a member of the Boston Police who had some connection to pop culture recognized the odd shapes on the placards. The weird glowing squares weren’t bombs, they were Mooninites. More specifically, they were advertisements for Adult Swim’s Aqua Teen Hunger Force.

Eventually referred to by city and state officials as a hoax, Massachusetts College of Art student Peter “Zebbler” Berdovsky and his friend Sean Stevens were arrested by the end of the day.

Zebbler and Stevens disagreed, and attempted to highlight the absurdity of the situation when released on bail the next day by only answering questions about “haircuts in the ’70s and how they affect our lives today and how we live in the future.” Incredulous journalists asked they were willing to lose the sympathy of those who felt the city had over-reacted, to which they responded “That’s not a hair question.” Their lawyer tried to remind the assembled media that his clients were journalists.

Officials wanted to blame Zebbler and Stevens for the entire incident. Then-Rep. Ed Markey, now a Massachusetts senator, told CNN that “whoever thought this up needs to find another job. Scaring an entire region, tying up the T and major roadways, and forcing first responders to spend 12 hours chasing down trinkets instead of terrorists is marketing run amok. It would be hard to dream up a more appalling publicity stunt.”

A few months later, the duo were more contrite when they reached a plea deal with the state. Then-Attorney General Martha Coakley noted that it would be hard to prove that Zebbler and Stevens intended to create panic when they placed the devices around the city, especially when the Mooninite placards had been placed in several cities around the country without incident. The two apologized and agreed to community service, while Adult Swim parent company Turner paid $1 million to Boston and another million to Homeland Security as compensation for their trouble.

However, Massachusetts politicians were intent to make sure that they wouldn’t get off so easily in the future. A few months later in May 2007, Sen. Edward Kennedy introduced the Terrorist Hoax Improvements Act of 2007, which would have allowed the government to take civil action against parties involved in perceived hoaxes if they failed to “promptly and reasonably inform one or more parties … of the actual nature of the activity.” The bill never ended up going anywhere.

In a new feature on Input chronicling the incident, Zebbler, Stevens, and others involved with the case say they’re doing fine today. While the incident complicated Zebbler’s attempt to become an American citizen and created a “scary year,” it has been resolved. Now, the Great Mooninite Panic of 2007 has become something of a legendary misunderstanding between generations, and a reminder of how quickly the state security apparatus can escalate.

And, fifteen years later, Adult Swim seems a little more defiant in its remembrance, as can be seen on Twitter.