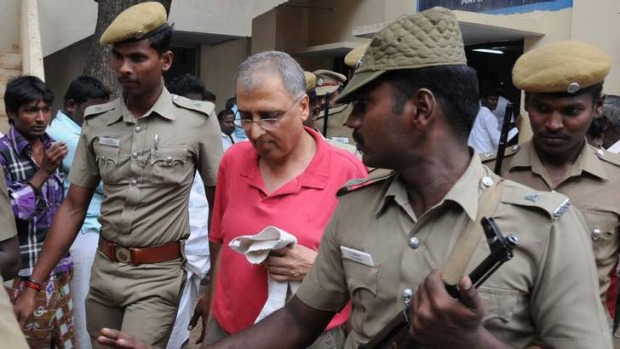 More than a dozen artifacts linked to infamous antiquities trafficker Subhash Kapoor were seized from an Ivy League school’s art gallery on Wednesday by Homeland Security. Twelve of the 13 artifacts were allegedly looted from India, and one item originated from Burma.

The artifacts have been valued collectively at $1.29 million, according to officials. Authorities did not identify which school the pieces had been taken from.

The goods were seized as part of a decade-long investigation into Kapoor, a disgraced Manhattan art dealer who was accused of by U.S. authorities of being “one of the most prolific commodities smugglers in the world.”

In 2019, the Manhattan District Attorney’s Office filed a criminal complaint against Kapoor that described a multinational ring that trafficked thousands of stolen artifacts worth more than $145 million over 30 years. Kapoor was jailed in India and went on trial in early 2021. A spokesperson for the HSI told ARTnews that “it is anticipated that [Kapoor] will be extradited to the United States upon his release from prison in India.”

Kapoor, 72, was renowned among New York dealers for his ability to procure museum-quality goods until his initial arrest on trafficking charges in 2011 in Germany. Subsequent investigations revealed the scope of his criminal dealings. Some 2,600 objects—smuggled from Afghanistan, Cambodia, India, Pakistan, Nepal, and Thailand using false provenance papers—were confiscated from several storage locations owned by Kapoor in New York City. Thousands more are still missing.

“From where I sit, we’re very focused on putting those smuggling networks out of business,” James T. Hayes Jr., the agent overseeing much of Homeland Security’s investigation said following Kapoor’s first arrest. “At the end of the day, our primary responsibility is to get stolen property back to its rightful owners.”

In 2021, authorities in Manhattan returned 248 devotional icons worth $15 million to India. The group included two bronze statue Hindu deities dating from the 12th century and 16th century, respectively. Both were suspected of being harvested from remote shrines in the country that lack proper protection from the government.