A Clash of Alms — Global Issues 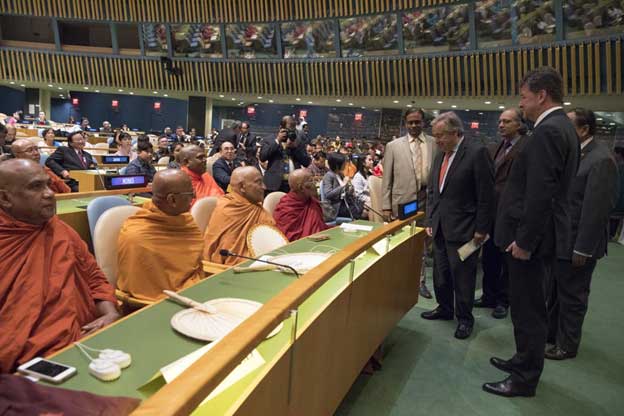 LONDON, Feb 03 (IPS) – Driven by unprecedented hardship to pass round the begging bowl, Sri Lanka has become the centre of a tussle between Asia’s two superpowers.

There was a time in Asia’s predominantly Buddhist countries when saffron-robed monks walked from house to house in the mornings, standing outside in silence as lay people served up freshly cooked food into their ‘alms bowls’. The food was then taken to the temples, where it was shared among the monks.

That religious tradition has now largely given to other ways of serving alms to monks.

Today, governments and their aggrandising acolytes have converted this respected and virtuous tradition into one of begging richer nations to rescue them from economic deprivation, brought on largely by failed promises and disjointed and ill-conceived foreign and national policies.

This ‘begging bowl’ mentality in search of ‘alms’ is more likely to succeed if a nation is strategically-located in an area of big power contestation. Sri Lanka is just that, situated in the Indian Ocean and only a few nautical miles from the vital international sea lanes carrying goods from West to East and vice versa.

The country’s economy has been caught in a real bind. Buffeted by the Covid pandemic on the one hand and, on the other, ego-inflating economic and fiscal policies introduced by the new president Gotabaya Rajapaksa shortly before the country was pounded by the pandemic, Sri Lanka now has to beg or borrow to keep its head above water.

By December, Sri Lanka’s parlous foreign reserves situation had dropped to a perilous $1.2 billion – enough for three weeks of imports. The foreign debt obligation of $500 million that needed to be met last month was only the beginning. Another $1 billion is due in July. The total pay-off in 2022 will amount to some $7 billion.

Meanwhile the pandemic has virtually killed tourism, one of the country’s main foreign exchange earners, driving the hospitality industry into free-fall. If this was not bad enough, the Central Bank’s attempts to put a tight squeeze on incoming foreign currency led the country’s migrant labour remittances to drop drastically as overseas workers turned to the black market to earn real value for their money sent to families at home.

But nothing has had such widespread political repercussions as the government’s ill-advised policy of banning overnight chemical fertilisers last May, ahead of the country’s main agricultural season between October and April.

Its over-ambitious agenda of trying to turn Sri Lanka into the world’s first totally ‘green agriculture’ was laudable enough, but was botched when the sudden ban on chemical fertilisers and other agrochemicals – used by farmers for the last 50 years or so – left rice farming and other cultivations in disarray and farmers inevitably confused.

The government’s agenda of trying to turn Sri Lanka into the world’s first totally ‘green agriculture’ was botched.

While agricultural scientists and other experts warned of an impending food scarcity due to failed harvests and sparsely cultivated fields, the government ignored the warnings, sacking heads of the Agriculture Ministry and removing its qualified agricultural experts for spreading doom and gloom.

Against this backdrop of confused governance, probable food shortages due to poor harvests and slashing of imports and even essential medicines for lack of foreign currency, growing public unrest has seen even farmers take to the streets.

Consequently, a once-buoyant government confident of public popularity, especially among the Sinhala-Buddhist voters and the rural community, began to look beyond its faithful ally and ‘all weather’ friend China for ‘alms’ to pull it out of the morass.

China has already planted a large footprint in Sri Lanka, with massive infrastructure projects such as sea and airports in strategic areas, which allowed a monitoring of international sea lanes to make neighbouring India worry.

A major Chinese presence in Sri Lanka could endanger India’s security at a time when China continues to militarily pressurise India in the Himalayas.

From the early 1950s Sri Lanka, then called Ceylon, and China had established close ties. Despite threats of sanctions by the US, Colombo sold natural rubber to China – then involved in the Korean War –in exchange for rice, marking the beginning of the long standing ‘Rubber-Rice Pact’.

As long as China’s immediate concern was the Pacific theatre, where the US and its allies remained dominant, and China faced territorial disputes in the South China sea and elsewhere, India was not overly concerned with China-Sri Lanka bilateral ties.

But as soon as China began to expand into the Indian Ocean, challenging what India considered its sphere of influence, New Delhi’s concerns multiplied considerably, as did its disquiet over China’s growing influence over Colombo.

The 70th anniversary of that Sino-Ceylon agreement, which cemented bilateral relations at a time when the People’s Republic of China was not even a member of the UN, was commemorated last month when China’s Foreign Minister Wang Yi visited Colombo in early January during an influence-building visit to Africa, the Maldives and Sri Lanka.

This is the third high level visit by a Chinese official in little over a year, beginning with former foreign minister and Politburo member Yang Jiechi in October 2020, and followed last April by Chinese Defence Minister Gen. Wei Fenghe, a visible signal to India and US-led ‘Quad’ countries the importance that China attaches to its relations with Sri Lanka.

But Sri Lanka’s struggle against dwindling reserves, the need for foreign investment and expansion of trade relations at a time of economic hardship has shown the Rajapaksa regime that reliance on China alone will not suffice.

A more balanced foreign policy and an equidistant relationship between Asia’s two superpowers cannot remain at the level of diplomatic rhetoric. It is an imperative, given Sri Lanka’s geographical location in close proximity to India and the historical, cultural and ethnic ties with it huge neighbour.

Sri Lanka’s ambassador to Beijing, Dr Palitha Kohona, said recently that Colombo should not depend on China forever – a valid piece of advice Colombo should seriously consider.

India also cannot ignore that, security-wise, Sri Lanka lies in India’s underbelly, whose vulnerability was exposed during the Bangladesh Liberation War in 1971. So a major Chinese presence in Sri Lanka could endanger India’s own security at a time when China continues to militarily pressurise India in the Himalayas.

Last December Finance Minister Basil Rajapaksa’s hurried visit to New Delhi, even as his maiden budget was still being debated in parliament, was indicative of Sri Lanka’s anxiety to seek India’s economic and financial assistance, without depending solely on Beijing.

That visit led to the two countries agreeing on ‘four pillars’ of cooperation in the short term, including emergency support of a $1 billion line of credit for importing food and medicines and a currency swap to bolster Colombo’s dwindling foreign reserves.

Other assistance included investment in an oil tank farm for oil storage in northeastern Trincomalee, close to the vital natural harbour that served the British well during the Second World War.

An Indian company, the Adani Group, has already won a stake in the Colombo port, where it will engage in developing the western terminal while the Chinese build the eastern wing.

Meanwhile, Colombo is having talks with China for a new loan besides the $500 million loan and a $1.5 billion currency swap.

While the two major Indian Ocean powers tussle for supremacy in this vital maritime region, Sri Lanka is beginning to understand that it sometimes pays to dip one’s oars in troubled waters.

Neville de Silva is a veteran Sri Lankan journalist who held senior roles in Hong Kong at The Standard and worked in London for Gemini News Service. He has been a correspondent for foreign media including the New York Times and Le Monde. More recently he was Sri Lanka’s deputy high commissioner in London