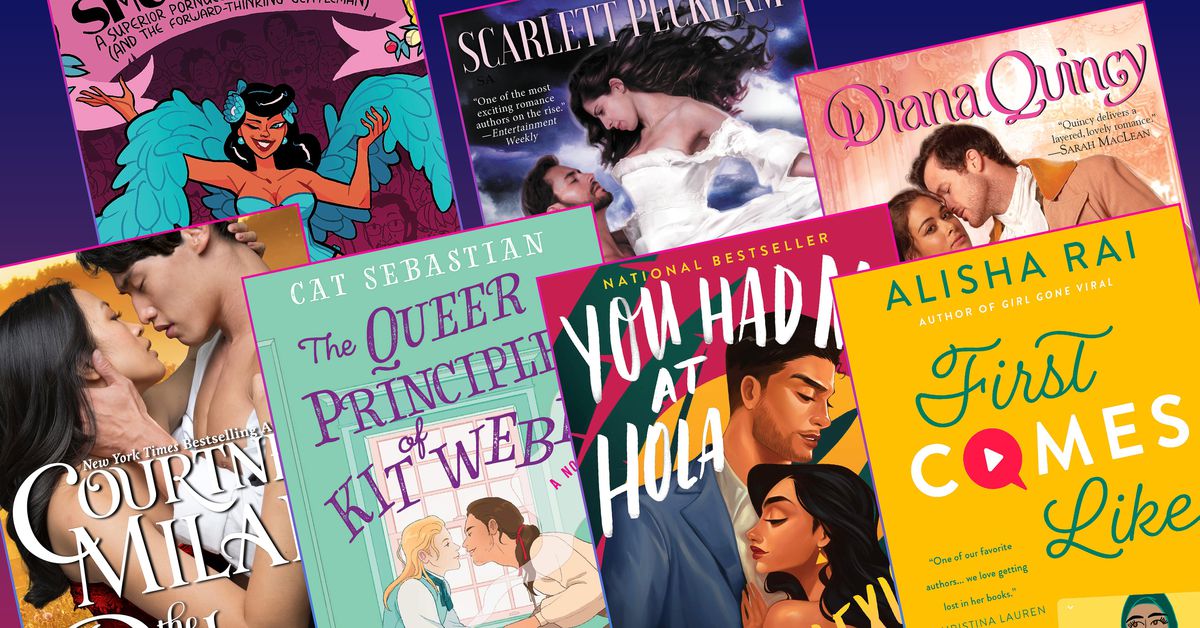 There is nothing quite so delicious as a good romance novel.

Whenever the world is a bit Too Much, life is overly stressful, and my Twitter timeline is on fire, I turn to romance novels as a way to relax and heal my soul. The wide variety of subgenres, the emotional highs and lows of falling in love, larger-than-life characters, steamy love scenes, and a guaranteed happy ending provide a perfect balance of satisfying storytelling and escapism, and they have been the only reason I have read anything over the past few years.

And so to encourage everyone to read more romance, I have compiled this list of romance novels that, in this humble bookseller’s opinion, are well worth picking up for your next read!

Most love stories don’t start with somebody getting hit by a car (they’re fine), but Talia Hibbert is an author who can weave utterly magical romances from even the wildest of storylines. Her most recent romantic comedy follows Eve, a human embodiment of sunny chaos, and Jacob, an icy uptight perfectionist, as they begrudgingly work together to save the Jacob’s B&B, delivering heated attraction, hilarious hijinks, and a screamingly adorable romance. Featuring two neurodiverse protagonists, excellent body diversity, and sparkling dialogue, Act Your Age, Eve Brown is a book to hug to yourself and savor.

If you’ve ever wished that the Great British Bake Off had more sexual tension, then I have the perfect book for you. A sunshine-and-rainbows baking show contestant and the dour, grumpy judge who eliminated her from the competition square off to win a coveted baking commission for a royal wedding—what could possibly go wrong?!

Battle Royal is a perfect introduction to Lucy Parker, who made her name with her equally-wonderful London Celebrities series. It is a delicious, delirious confection guaranteed to make you smile, with top-shelf banter and a rich emotional journey that will leave your mouth watering for more.

Sarah MacLean was my introduction to the romance genre, and I love each of her books more than the last. There are any number of starting points for her books, but Bombshell is the first book in her newest series: Hell’s Belles, which follows a Victorian girl gang who are “hell-bent on smashing the patriarchy in all corners of London, from glittering ballrooms to dark alleys.” Yes please, I’ll take a million.

Bombshell follows Lady Sesily Talbot, London’s most scandalous debutante, and Caleb Calhoun, an American businessman (ahem, smuggler), who have been dancing around each other for years, never quite succumbing to their mutual attraction. Until now… *dun dun dun.*

For those of you who prefer a little bit of science fiction with your romance, you absolutely cannot go wrong with Kit Rocha. This sci-fi, fantasy, and paranormal romance and erotica duo has written nearly 20 books set in a post-apocalyptic world (so plenty of backlist!), and Deal with the Devil begins their newest Mercenary Librarians series. That’s right—Mercenary. Librarians.

In a near-future crumbling America, knowledge is key, and information broker Nina is determined to use her own to save those in need. This dangerous mission sets her on a collision course with Knox, the battle-weary leader of a rogue squad of super-soldiers fighting to survive. What follows is an action-packed dystopian adventure that will keep you turning the pages way past your bedtime and send you to the bookstore to buy Book 2 as soon as you’re done!

As much as I love action and angst and adventure, sometimes I just need a sweet, small-town love story to read. The Duke Who Didn’t provides that in spades. A tiny village in the English countryside with a large Asian community, a yearly festival, a no-nonsense miss who lives her life by lists, and a charming, mischievous duke who may or may not own the whole village…what more could you want?

The historical romance genre has a (well-earned) reputation for being overwhelmingly white. Courtney Milan is one of the many authors pushing back against the misconception that people of color in historical romance is somehow “historically inaccurate,” and she has done amazing work to address diversity and inclusion in the romance genre. Throw in complex characters, effervescent banter, and enticing romance, and you’ve got the whole package.

I will admit that romantic fantasy is a subgenre that I have the least experience with, but the few that I have read have been utterly enjoyable. This first book in Milla Vane’s Gathering of Dragons series is absolutely bonkers in the best possible way: it’s got ripped barbarians, gorgeous princesses, scorching hot love scenes, magic, monsters, enough politicking to put Game of Thrones to shame, and…dinosaurs??

Listen, you’ll just have to trust me, I don’t know what else I can tell you except that A Heart of Blood and Ashes is so much fun and a fabulous read, and it has made me want to read more romantic fantasy!

Whatever Kian Andrews expects when his ex-boyfriend Hudson texts him after months of radio silence, it is not a request to pretend to still be dating for the benefit of Hudson’s parents, and it is certainly not being maneuvered into being Hudson’s plus-one for the Georgia wedding of the season. As the tagline promises, fake boyfriends don’t always equal fake feelings, and as Kian and Hudson navigate their renewed (pretend) relationship, they also have to contend with their own unresolved feelings for one another.

This debut adult romance is fast-paced, hilarious, and heartfelt, and a snappy update on the timeless fake dating trope. Kosoko Jackson is definitely one to watch, and while you’re waiting for his second adult romance, make sure to check out his Young Adult novels as well!

Alisha Rai is a romance queen that I would gladly follow into battle. Her heroines are whole, complex women who have fully-formed lives and personalities and ambitions, and their love interests are decent, sensitive heroes who drink their Respect Women Juice regularly. She also writes stellar romance, as an employee at the Taco Bell drive-thru once found out when my car stereo auto-played my audiobook mid-sex scene. It was A Time.

First Comes Like is the final book in her Modern Love trilogy, but you don’t need to have read the first two to fully fall in love with Jia, makeup expert and internet influencer, and Dev, Bollywood star and Hollywood hopeful. Rai manages to skillfully pack so much into her books about family, belief, self-respect, tradition, mental health, and more, and I cannot wait for you to read them.

Recently-divorced Dahlia Woodson is determined to reinvent herself and make a mark as a contestant on America’s favorite cooking show. How unfortunate that her first move on the show is to fall flat on her face and shower the set with a tray of fish tacos, and that the competitor behind her is distractingly attractive.

London Parker, after announcing their pronouns on national television, is determined to not let the anxiety, the trolls, or the clumsy contestant in front of them throw them off their cooking game. But love, of course, has other plans, and Dahlia and London’s simmering attraction soon blooms into a full-blown, steamy, shenanigan-filled relationship outside of the kitchen. But do they have the right ingredients for a happily-ever-after? (Spoiler alert: They do!)

Cat Sebastian writes utterly delightful queer historical romances, and this one is no exception. Kit Webb, a reluctantly reformed highwayman who has left his thieving days behind him, is recruited for One Last Job by Percy, Lord Holland, a dapper dandy in need of a good old-fashioned heist. What follows is a delectable romp through shady coffee houses and opulent ballrooms, full of adventure, sparkling wit, and un petit Eat the Rich. I cannot recommend it enough.

The historical romance genre is inundated with rakes: dissolute, handsome ne’er-do-wells whose hard-partying lifestyle is (usually) tempered by their love for the novel’s heroine. I love reading about a devilish rake meeting his romantic match as much as anyone, but it is undeniable that the trope is deeply entangled in outdated binary gender roles. Men are allowed to be unrepentant rakes, but women almost never are. Thank goodness for Scarlett Peckham.

Seraphina Arden is a “ruined” woman who has embraced her scandalous reputation on a quest for women’s equality. She writes radical pamphlets and lives her life precisely the way she wants, complete with wine-soaked nights, handsome lovers, and all. Adam Anderson is a wholesome, widowed Scottish architect, with two young children to raise, a business to protect, and a strong aversion to scandal. Their casual, summer affair soon blossoms into something more, and soon Seraphina and Adam both have to grapple with the secrets of their pasts and how their ambitions and desires for the future might ruin their future together. Sexy, heartbreaking, and empowering, I need the second book in the series immediately.

For those who like their romance a bit more…graphic (get it?!)…may I present the Smut Peddler series? These comics anthologies are very NSFW, and are some of the most diverse and inclusive romance and erotica I have ever read. An incredible array of amazing artists contributes to these collections, which are all super diverse and queer and kink-affirming and again, I cannot stress this enough, very NSFW.

This is an engaging historical romance with a slight tinge of mystery. It features Hanna Zaydan, a London bonesetter of Arab descent, slowly falling for her viscount client, who unbeknownst to her believes she holds a clue to who murdered his parents many years ago…

Diana Quincy is an exciting new voice in the historical romance scene, and her writing is captivating and her romances are sizzling. Perfect to pick up for your next read!

Soap opera darling Jasmine and telenovela heartthrob Ashton are both at professional crossroads, and soon both land leading roles in a new bilingual romantic comedy for the largest streaming service in the country. The entire production—and their careers—hinges on Jasmine and Ashton producing sizzling, believable chemistry, but a disastrous first impression and awkward rehearsals threaten to doom the show from the beginning. WHATEVER SHALL THEY DO?? Well, obviously they rehearse in private, digging beneath cool, professional exteriors to the smoldering attraction beneath, with deliciously explosive results. This book is smart, sexy, and one of my absolute favorites.