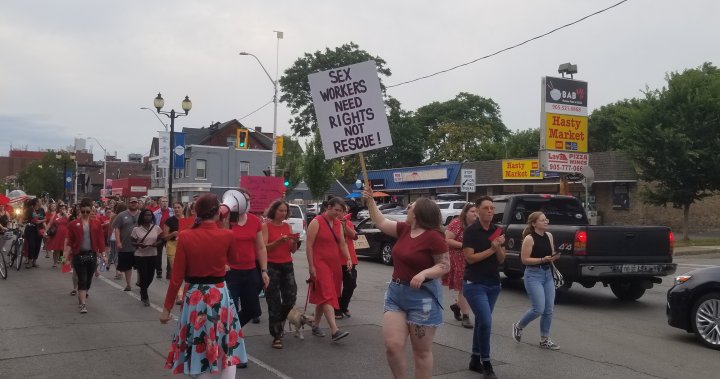 Dozens of Hamiltonians dressed in red took to Barton Street in protest on Friday night as part of the vigil for a 46-year-old female sex worker who was allegedly assaulted in the early hours of June 27.

The vigil was organized by Hamilton’s local Sex Workers Action Program. The evening began in an alleyway off of Barton, between Emerald Street North and Oak Avenue — the same alleyway where the attack allegedly took place. The victim’s mother, who has chosen not to be identified, was slated to speak.

Attendees lined the walls of the alley, while SWAP Hamilton’s executive director Jelena Vermilion spoke. She discussed the horrific attack, “making what we do illegal only forces us to do it in riskier circumstances,” said Vermilion as she presented the argument that Canada’s current laws surrounding sex work, laws that particularly focus on reducing and eliminating the demand for sexual services by targeting and “shaming” clients, endanger sex workers.  “So long as the act of engaging with sex for money is illegal, sex workers will not see the police as allies in moments when we need them.”

“Police actively surveil, harass and detain sex workers. Many of whom are impoverished, single mothers, trans, black, indigenous, Asian, racialized or otherwise without status in Canada. We as sex workers have valuable knowledge about our neighborhoods but the police are unsafe for us. So long as Canada forces sex workers into conflict with the law, we will never be able to be helped by police, or to help the police.”

Vermilion and her associates from SWAP Hamilton presented the mother of the victim with a cheque for $9000 – raised from the community to support her and her daughter. The victim’s mother, echoed calls for decriminalization, and the need for better understanding and education about sex work. She demanded that no one be deemed insignificant deserving of harm in our society because of their line of work. She admitted that even she has learned things only in the past weeks, come to a different understanding of sex workers like her daughter.

After the speech, the crowd marched toward SWAP Hamilton’s headquarters near Barton and Lottridge Sts.

-with files from Will Erskine