Victoria’s Chinatown home to one of B.C.’s last payphones 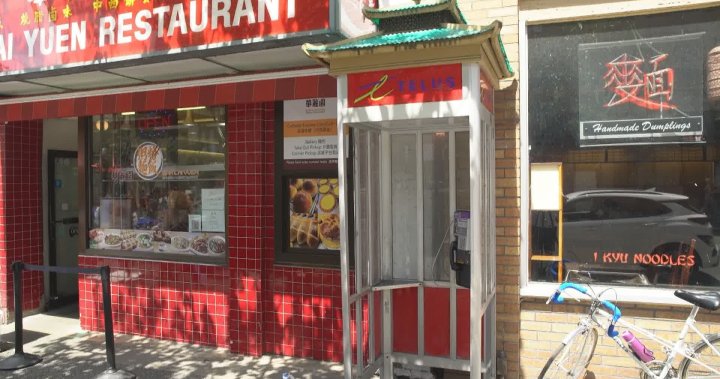 When the Rogers network outage brought everything from banking to government services to a halt Friday, millions of Canadians were left scrambling for ways to connect to cellular service and internet coverage.

While payphones offered one option to make phone calls, there are very few left in B.C.

Found it.
Now does anyone have a quarter? https://t.co/jfKsiGG1RO pic.twitter.com/6ZmLEdz8Rc

“I used to make a phone call for a dime on the end of a fishing line, and you could pull it back out and make repeated phone calls,” recalled one man, who said he wasn’t able to take advantage during the Rogers meltdown because he didn’t have change.

Bell Canada and TELUS payphones have been in decline for decades.

End of an era: St. Albert’s last payphone to be removed

As wireless growth exploded a decade ago, Bell Canada wanted to hike the price of a payphone call in B.C. from $0.50 to $1.00.

Today, Bell Canada told Global News it has no payphones in B.C.

TELUS said it currently has about 800 active payphones left in B.C., with most in transportation hubs, hospitals, prisons and at some corner stores.

TELUS would not provide exact locations of its last payphones.

Between July 2019 and Sept. 2021, homeless blogger Stanley Q. Woodvine mapped a list of 63 working payphones in Metro Vancouver — including 41 in the city of Vancouver.

Woodvine understands some of his research will now be outdated, but said the vast majority were found inside publicly accessible buildings where the payphones were protected from vandalism and regularly sanitized.

He believes there should be a commitment to maintain a thin network of easy-to-find payphone landlines inside publicly accessible buildings like libraries, community centres, hospitals and shopping malls.

Many of the remaining public telephones, including an FSH brand call-box outside Hasty Market on Main Street at 16thAvenue in Vancouver, have seen better days.

At the time, more than 8,000 FSH payphones were to be operated under the WiMacTel brand and located in major airports, government locations, convenience stores, gas stations, restaurants, shopping centers and apartment buildings.

It’s unclear how long the battered FSH payphone has been outside the Vancouver convenience store, or if it is in working order.

The TELUS payphone in Victoria’s Chinatown does make calls but a second one on Fisgard Street a block away appeared to be broken.

#WhatAmIWednesday
If you’ve left your cell at home you can still call this one in. pic.twitter.com/0jELi8xDfB

The central branch of Vancouver’s Public Library had a payphone on its fifth floor as of July 2019, but staff said it has since been removed.

Greater Victoria’s Public Library on Broughton Street has two payphones, while a TELUS payphone in the Royal BC Museum’s lobby may join the exhibits one day.