Ukraine applies to NATO alliance. How easy will it be to become a member? – National 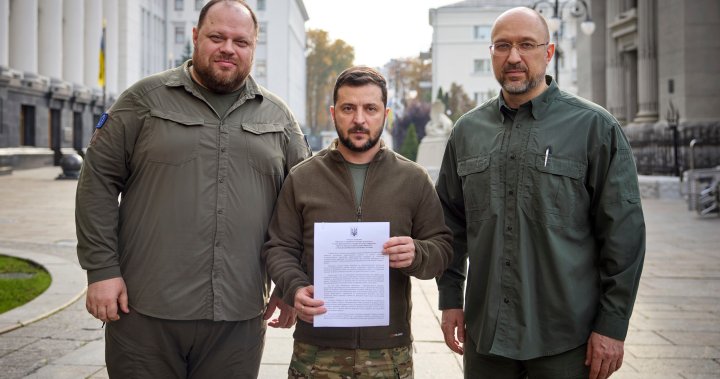 Ukraine is formally applying for a fast-track membership to the NATO military alliance, but experts say it will likely take years for the country to actually become a member.

“There is certainly no rush to bring Ukraine into NATO,” Julian Spencer-Churchill, associate professor of political science at Concordia University, told Global News. “If I had to bet, I would say seven years.”

NATO, the North Atlantic Treaty Organization, is a political and military alliance of countries from Europe and North America, formed shortly after the second world war in response to the Soviet Union’s Warsaw Pact. Created in 1949, it currently has 30 members including Canada, the United States, Germany, France, Greece and more recently, Poland.

Following Russia’s invasion of Ukraine in Feb., Finland and Sweden simultaneously conveyed their intent to join NATO but have not yet been officially invited to become allies.

“NATO provides countries collective defense and collective assurance. It allows them to cooperate faster than if there was no alliance,” said Spencer-Churchill.

Eight months into the war, Ukraine’s Volodymyr Zelenskyy was shown signing a document flanked by his prime minister and the speaker of parliament on Friday in a Telegram video, after announcing the membership bid – something Moscow fiercely opposes.

4:14
Russia raises the stakes in the war against Ukraine

Russia raises the stakes in the war against Ukraine

“We are taking our decisive step by signing Ukraine’s application for accelerated accession to NATO,” Zelenskyy said.

“De facto, we have already proven compatibility with alliance standards. We trust each other, we help each other, and we protect each other.”

All NATO decisions, including welcoming in a new member like Ukraine, are made by consensus, meaning an agreement is reached by all of the countries in the alliance.

“Everyone has to agree for the membership to be advanced,” Spencer-Churchill said. “It’s going to be a negotiation between NATO members.”

And, with alliances comes a “burden-sharing problem,” according to Spencer Churchill.

In applying to become a member of the alliance, Ukraine is suspected to face hurdles with their immediate neighbours, NATO members Hungary and Romania, because of Ukraine’s pursuit of a cultural homogenization policy – largely targeted at the Russians, according to Spencer Churchill.

“This had effects on other minorities,” he said.

Hurdles may also arise with Poland, Turkey and Greece, he added.

In order to maintain credibility within the alliance, NATO may also take its time approving membership during the war, which began in Feb, according to Spencer Churchill.

“If you were to have Ukraine join NATO, it would neatly benefit from this nuclear protection and if Vladimir Putin fired a nuclear weapon inside Ukraine, NATO would be obliged to respond,” he said.

“If they didn’t respond, it would undermine their credibility. They can’t leave any room for doubt and unfortunately there is so much doubt that would be introduced into the formula if NATO incorporated Ukraine.”

Instead, the alliance would rather see Western allies like the U.S. aid Ukraine in defense.

“NATO prefers that force of a threat (in return),” said Spencer-Churchill.

On Friday, NATO accused Russia’s Vladimir Putin of provoking “the most serious escalation” of the war in Ukraine since it began, noting he would not succeed in deterring the alliance from supporting Kyiv.

“We have the combination of the mobilization in Russia, combined with the reckless, dangerous nuclear rhetoric, and then today’s illegal annexation, or attempt to annex parts of Ukraine,” NATO Secretary General Jens Stolenberg said.

“Together this is the most serious escalation of the conflict since the start and the aim of President Putin is to deter us from supporting Ukraine. But he will not succeed in that.”

Putin proclaimed Russia’s annexation of 15 per cent of Ukraine at a Kremlin ceremony.

According to Stolenberg, Russia’s move was the “largest attempted annexation of European territory by force since the Second World War.”

The area roughly the size of Portugal had been “illegally seized by Russia at gunpoint,” he added.

“This land grab is illegal and illegitimate. NATO allies do not and will not recognize any of this territory as part of Russia,” said Stolenberg.

Stolenberg was noncommittal on Zelenskyy’s fast-track NATO application, saying alliance leaders “support Ukraine’s right to choose its own path, to decide what kind of security arrangements it wants to be part of.”

Ukraine officially declared its aspirations for becoming a member of NATO in 2008 at the Bucharest Summit in Romania, Dominique Arel, who holds the chair of Ukrainian studies at the University of Ottawa, told Global News.

“Initially the idea was to put Ukraine on the track of becoming a member,” he said. “But there was no process. It was understood that it was just not going to happen anytime soon.”

Then in 2014, when Russia first invaded Crimea and parts of Donbas, NATO supported Ukraine politically but not with troops, according to Arel.

“That was the real test. It didn’t put the question of NATO’s membership on the agenda,” he said.

Now, Arel is unsure if Ukraine will ever officially become a member of the alliance.

“I’m not sure that’s still a realistic outcome. Ukraine has this unique and special status of basically being integrated into NATO to an unprecedented level short of the formal membership,” he said, speaking of the amount of aid Ukraine has seen from NATO since the beginning of the war.

“I don’t see how that’s really going to change.”

Canada’s Foreign Affairs Minister Melanie Joly said the country “believes that Ukraine should be part of NATO,” at a news conference in Washington, D.C., on Friday.

“It’s been our position for more than a decade, and we believe in the open door policy,” she said.

— With files from Reuters and The Associated Press