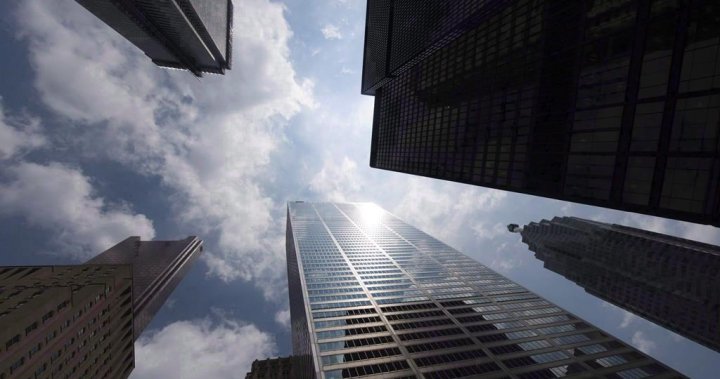 The report analyzed the financial statements of 123 Canadian corporations worth at least $2 billion and found the effective or actual tax rate paid by these companies was about 15 per cent in 2021 – significantly lower than the 26.5 per cent average of the combined federal and provincial tax rate.

New taxes on banks, life insurers could generate $5.3B over 5 years: PBO

The group says that compares to an average effective tax rate of 19 per cent between 2017 and 2019, or an average of $13.5 billion shortfall in tax revenues in the years before the pandemic.

Report author D.T. Cochrane says the lower effective tax rate paid by corporations can be due to a range of reasons, from legal tax deductions to claiming profits in lower tax jurisdictions.

Canadians for Tax Fairness describes itself as a non-profit, non-partisan organization that advocates for fair and progressive tax policies.

It is calling on federal Revenue Minister Diane Lebouthillier to be transparent about what accounts for the lost tax revenue.

Tax filings could shed some light on why these corporations paid less in taxes, but Cochrane says they don’t provide enough detail to understand the gap in taxes paid.

Cochrane said the group is ready to “sit down and chat” with Lebouthillier about the report’s findings, which he said suggest claims are being made for profits in low-tax jurisdictions “that are questionable, to say the least.”

The Liberals included measures to reform the tax system and close loopholes in the 2022 federal budget.

One of the proposed measures would prevent the use of foreign corporations to avoid paying Canadian taxes.

The budget estimated this measure would increase federal revenues by $4.2 billion over the next five years.

1:15
Poilievre faces off with Trudeau: ‘Ground the jet, park the hypocrisy, and axe the tax hikes’

Poilievre faces off with Trudeau: ‘Ground the jet, park the hypocrisy, and axe the tax hikes’ – Sep 22, 2022

In the same budget, the Liberals also announced a windfall tax and a permanent increase in the corporate tax rate on banks and life insurers in response to high profits during the pandemic.

The Liberals partly attributed the high profits earned by financial institutions to federal pandemic supports for people and businesses that reduced the risk these institutions would have otherwise faced.

The parliamentary budget officer estimates these measures will bring in an additional $5.3 billion in revenue over the next five years.

However, Cochrane said limiting these measures to one industry “turns the attention away” from the need for higher corporate tax rates across industries and a broader windfall profits tax for 2021.