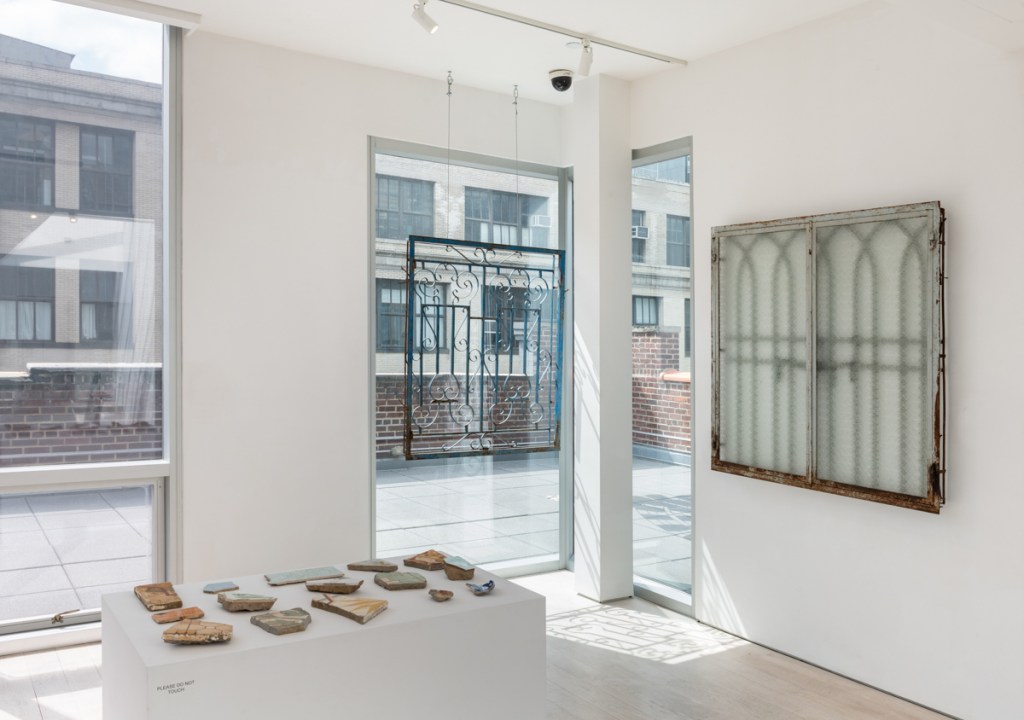 Tiffany Chung, who was born in Vietnam in 1969 and came to the United States in 1975 as a refugee, has long used mapmaking as a part of her rigorous research, analysis, and fieldwork, evincing a personal drive to process history. The works in “Terra Rouge: Circles, Traces of Time, Rebellious Solitude,” one of two bodies of work recently on view at Davidson Gallery in New York in collaboration with Tyler Rollins Fine Art, presented maps of a kind, centered on the Bình Long–Phu’ó’c Long plateau in southwestern Vietnam. The jewel-toned vellum sheets, meticulously marked and perforated, have a sculptural presence that their layering enhances. The overlapping sheets are attached only at the top, leaving the lower portions loose and slightly furled, like fabric hanging on a laundry line. Their thingness reminds the viewer that a map is an object to be physically contended with, not only a document to be studied and absorbed.

While this body of work is grounded in historical research, the individual pieces are Chung’s imagining of what may have happened in this region, where circular earthworks (CEW) dating back to 2300–3000 BCE have undergone their own layer-by-layer excavation. DEGA-LATINIS HYPOTHETICAL INTERACTION SPHERES INDEX (2022), named after scholars Michael Dega and David Kyle Latinis, who have researched these circular earthworks, is a drawing that serves as a key for the hand-perforated patterns in Chung’s other pieces. Different marks denote earthwork settlements, specialist settlements (circular areas focused on a particular artifact type such as pottery), non-earthwork settlement, and more.

Surprisingly, this piece does not cast the others as mere data visualization. The shapes, colors, perforated patterns, and strokes have an authority of their own. Whether or not one knows all its meanings and functions, the composition carries an internal logic, and the perforations call to mind the artist’s repeated meditative actions in making them, a process of embodying the knowledge that is more phenomenological than fact-driven. TERRA ROUGE: CEW SITES, RUBBER PLANTATIONS, AND ABANDONED AIRFIELDS (2022) stood out as the most densely worked example in the show. Its title clues viewers into the region’s historical destiny: it became the site of French colonial rubber plantations at the end of the 19th century, and later, one of the fiercest battlegrounds of the 1972 Easter Offensive during the Vietnam War.

The gallery’s upper level showcased “Archaeology for Future Remembrance,” featuring formally diverse works that are also based on place—this time the Th Thiêm district of Ho Chi Minh City. Chung focuses on a 2002 government-mandated urban development project that forcefully displaced tens of thousands of people. LANDSCAPES AND TRACES OF A PEOPLE YET TO COME (2013) is a three-channel video that portrays two workers prying out a portion of a tiled cement floor, an excision that was included in the show under the title 10°45’39″N 106°43’23″E  (2013), the exact geographic coordinates of the spot. Panning to the evacuated, bulldozed environs, the video evokes the works’ physical and social context, as did multiple other components of the exhibition, such as the set of windows called ERASURE BEGINS FROM THE WILL TO KNOWLEDGE (2013). A close zoom to workers’ feet, revealing their ill-fitting open-toe sandals, invites another glance at LOCATION: CÂY BÀNG STREET – A SHOE PAVED ROAD, THÙ THIÊM (2016), an array of 10 examples of footwear, ranging from children’s slippers to adult-size shoes.

The video is impressionistic and sparse—one moment we see an empty road, another, a stack of leaning window frames. Again and again we return to the workers struggling with the cement floor, laboring in earnest silence. When the men finally succeed in lifting the section of floor at an angle, letting the soil above it slide down to reveal the tile’s floral pattern, there is a sense of discovery and relief. Such decorative work is not what one expects to find in a place surrounded by untended bushes, trees, and soil, supposedly waiting for development. Chung’s excavation therefore is an anticipatory one, gathering key fragments before they are buried and forgotten.

A tense question forms as one engages with Chung’s works: what is speculative and what is objective? Chung seems to be two artists at once: one an ethnographer and activist, intensely committed to research; the other a memoirist, deeply aware of the ephemerality of physical materials and the fallibility of human recollection. Perhaps allowing this tension to surface is what Chung is reaching toward—her motive is not to expose a lie, or uncover a lost truth, or even distinguish between aggressors and victims. It is, rather, to reclaim various stories and their methods of telling, pushing us beyond the allure of neat answers.