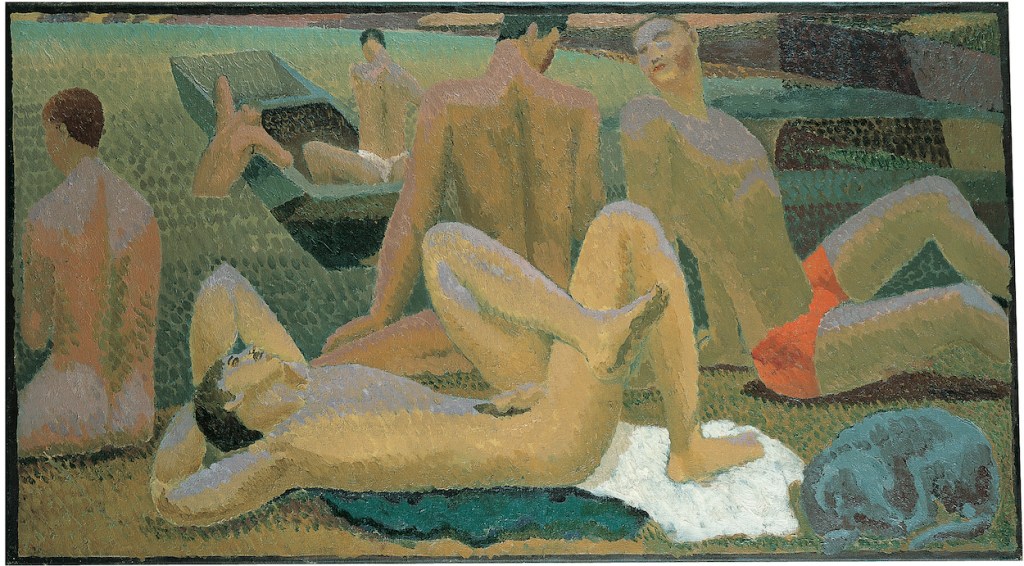 The painter Paul Cadmus once remarked that, in the 1930s, homosexuals in New York were simply called artists. How queerness came to be synonymous with the arts is really a story of modernism
itself—one rife with private codes and intimate patronage. Think of Gertrude Stein’s avant-garde coterie in Paris, or Natalie Barney’s contemporaneous Left Bank salon, or Cadmus’s own circle in
New York. From at least Oscar Wilde on, queerness and aestheticism have been linked in the public imagination.

“The First Homosexuals: Global Depictions of a New Identity, 1869–1930,” an exhibition at Wrightwood 659 in Chicago, seeks to underscore that fact on a grand scale. The show was intended to be a single blockbuster survey until the pandemic forced the curators—a team of 23 scholars led by Jonathan D. Katz and Johnny Willis—to split it into two parts. The first half gathers some 100 works in various media from multiple (predominantly Western) countries; the second, larger installment, which will add more artists from the Middle East, Latin America, and Asia into the mix, opens at Wrightwood in 2025.

As its lofty title indicates, the exhibition begins with the troublesome word itself. Hungarian journalist Karl Maria Kertbeny is credited with coining the term homosexual in 1869 to denote a distinct group of people rather than a behavior. The word had legal and medical implications that were more useful for bureaucrats than the general public. But by the late 19th century, when British physician Havelock Ellis and writer John Addington Symonds wrote Sexual Inversion, their landmark study of homosexuality, the term was in wider vogue. Conceptually, “The First Homosexuals” aims to examine how the nascent word and its attendant identity filtered into and influenced visual art throughout the following decades. Did such work intimate or envision a self-awareness that written language could not?

The answers offered here are mixed. In some ways, the exhibition’s incompleteness hampers its impact. The six decades charted provide a temporal constraint without narrative cohesion, a deficiency that even the overtly editorializing wall text can’t remedy. Instead of facilitating an aesthetic interplay and organic dialogue among the selected works, the curators opt for a curiously anthropological approach. This is reflected in the exhibition design: each small room, painted a distinct color and connected to others by archways that evoke Stein’s or Barney’s bohemian salons, showcases one of nine thematic categories: “Before Homosexuality,” “Archetypes,” “Desire,” “Past and Future,” “Public and Private,” “Colonizing,” “Between Genders,” “Pose,” and “Couples.” Work is hung nonchronologically, so there’s no sense of continuity or progression, just diligent eclecticism.

That’s not to say there aren’t gems on view. British painter Duncan Grant’s Bathers by the Pond (1920–21), a scene of languorous male sunbathers rendered in stippled paint and earthy tones, inspires reverie. American painter Charles Demuth’s Eight O’Clock (Early Morning), 1917, is a tender watercolor in which two men—one sitting dejectedly in pajamas, the other standing imploringly in underclothes—share a moment of ambiguous domesticity while another (nude) man washes his face at a sink in the background. Bath House Study (no date), a drawing in black chalk by Swedish artist Eugène Jansson (1862–1915), depicts an almost geometric configuration of nude men, each suspended in his own erotic lull—a tableau that wouldn’t be out of place in the late 20th-century oeuvres of Americans Patrick Angus or John Burton Harter.

Other works here allude to deeper cultural currents. A wall of archival photos documents the Elisarion, a neo-religious temple that poet and artist Elisàr von Kupffer built in Switzerland with his partner, philosopher Eduard von Mayer. These images—some of which feature men in makeshift crowns and sarongs striking poses in nature—evoke the utopian spirit that infused transatlantic queer life in the 19th and early 20th centuries, as embodied by, for example, American poet Walt Whitman and his British counterpart, Edward Carpenter. Growing Strength (1904), an imposing oil painting by the German artist Sascha Schneider, portrays a seasoned bodybuilder appraising the biceps of a young acolyte—a precursor to the physique magazines and “cult of the body” that defined gay life in midcentury and beyond.

A handful of pieces feel adrift. American painter Romaine Brooks’s 1912 portrait of the Italian nationalist poet Gabriele D’Annunzio, a sober likeness in Brooks’s characteristic gray palette, is a puzzling choice. (D’Annunzio, an infamous womanizer, was not homosexual, and he looms in joyless hauteur over the room.) A Brooks self-portrait—or one of her many portraits of female contemporaries—would have been a stronger choice. With three paintings on view, the Canadian artist Florence Carlyle is allotted more wall space than her elegant but otherwise dull portraits of women merit. And the show’s “Colonizing” section, which tries to explore how Western attitudes toward homosexuality diverged from those of Indigenous and Eastern populations, is undercooked. Wilhelm von Gloeden, the German photographer who decamped to Italy to stage pastoral fantasies with nude Sicilian boys, is included here, although his role as a colonizer is debatable.

Ultimately, the exhibition has the tone of a sociology textbook: serious, pedantic, often more stately than intoxicating. The very premise feels misconceived. It is not as if 1869 were a eureka moment that launched queer artists, en masse, into careers of self-representation. Increasing secularism, urbanization, and mass media did more to define homosexual identity than did the invention of the word itself, yet those realities remain either unexplored or oblique here. Instead of tracing a back channel story of modernism, the curators deliver a jumbled Wunderkammer. For a show that takes pains to frame homosexuality as fluid, the thematic layout comes off as rigid and delimiting. Here’s hoping the second installment loosens up.