The Case for Traveling Alone


Monique Andre has been solo traveling around the world since she was a teenager, when she first flew to Europe by herself. Now 54, she’s traveled around the U.S. in her conversion SUV and abroad to far-off locales like Patagonia, Iceland, Bali, and many, many more, all the while documenting her travels on Instagram and TikTok under the handle @neveraroadmap. Below, in her own words, Andre talks about reconnecting with her sense of childlike wonder, resisting the narratives that make women fearful to move through the world, and the first steps anyone can take toward their own solitary adventures.

I’ve been traveling since I was born. My parents had a boat, so it was part of my upbringing—specifically, traveling by sailboat.

When I was three years old, my parents split up, and my mother moved to the Hamptons to raise me. At age 10, my parents decided to get back together, and we moved onto my father’s sailboat. We sailed from New York to Florida in August 1978 and spent the winter in Key Largo.

While there, I won an essay contest where the prize was traveling with a few other kids to a deserted island in the middle of the Everglades. It sounds crazy by today’s standards—even though we did have chaperones—but we slept in tents on the island for a few days. We had to wake ourselves up every morning, and I still remember getting out of my tent and finding a spot on the island to watch the sunrise by myself.

It was the Everglades, so of course there were alligators and snakes, but no one ever said “be careful,” and that really helped shape the person I am today. There was virtually no one else around, and I had to take care of myself. That was the moment I figured out who I was and what I loved—I don’t ever remember feeling more alive, and I’ve spent a lifetime going back and forth between those glimmers of me, just me, and the self-imposed societal expectations of me. 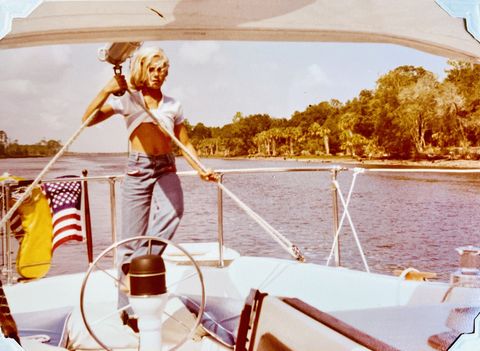 The author at age 10 sailing the Intracoastal Waterway while living on a boat with her family.

As a Hamptons kid, I was in the nightclubs of New York City by the time I was 13 years old. Then, of course, I moved to Manhattan to attend the Fashion Institute of Technology—it was the next step on my way to a glamorous metropolitan lifestyle.

I was 17 when I went on my first trip by myself, from New York to Europe. I had family in Germany, so first I flew to stay with relatives, but spontaneously decided to jump on a train to Rome, and then Paris. The visa laws changed while I was there, so I didn’t know I needed a visa to get into France and was detained at the train station for not having one. I was put on a train back to Germany in the middle of the night, so I got off the train at the border, found a hotel, and secured my visa the next day. I went right back to Paris. At the time, I didn’t speak more than high school-level French, and it never crossed my mind that I wouldn’t be capable of taking care of myself even when hardships were presented to me.

I don’t remember anyone thinking it was strange for me to go off to Europe alone. The next year, I went to Ecuador to volunteer with Earthwatch, an environmental nonprofit that pairs volunteers with researchers. We went up into the Andes to work with Indigenous tribes. I felt privileged at 19 that I was accepted and allowed to be there, and I was cognizant of my purpose finding a deeper connection to both the world at large and myself. 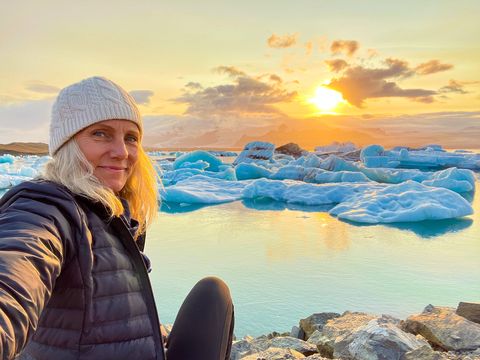 The author in Iceland in August 2021.

During that time period, I was working as a waitress at the fancy Upper East Side restaurant Le Bilboquet with celebrities all around me, but I was absorbed in reading Diane Fosse’s Gorillas in the Mist. I felt depressed and wondered what I was doing with my life. I feel like I spent my entire 20s going back and forth between my inner self—what felt right for me and made me feel whole, which was traveling—and the adult expectations of a job and money. In some ways, it felt like a pipe dream for me to do what I actually wanted to do.

Once again, I packed up and headed to Southeast Asia for almost a year. While there I had what I’ll call a Mowgli moment. I was in the jungle with a tribe on a small island off the coast of Sumatra, Indonesia and I saw my reflection in a pool of water. I sat there in disbelief, because I realized I hadn’t seen myself in a month. Honestly, it rocked my world. It hadn’t even dawned on me to worry about what I looked like while there. I never once thought, do I have a pimple? Or if I had bags under my eyes, or if my hair was a mess. I was living with approximately zero thoughts about my external appearance. The few clothes I had were washed in the river. My nails were never done, and I found it all so liberating, especially coming out of the Hamptons and New York City society. 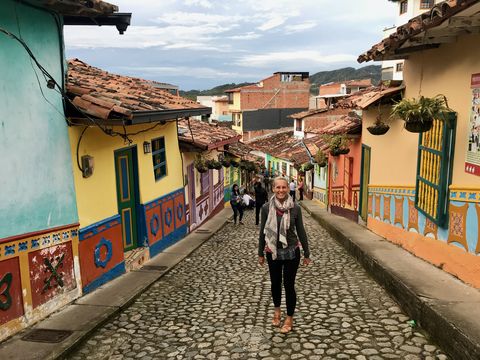 Spoiler: I did return to traditional life and stayed in it for over 20 years, but now I find myself casting off identifying labels like mom, wife, teacher, and reconnecting with the 10-year-old version of myself I found in the Everglades.

My social media accounts are named “Never a Roadmap” because in so much of life, we always have a destination in mind, a place we’re supposed to go, and a road map to get there. But life happens along the way—if we’re too focused on always following the path, I think we risk not enjoying the present moment. So many people talk about trying to find themselves, which implies that you lost yourself. I feel like we do lose ourselves in jobs and relationships, particularly as women.

Many women reach out to me on social media saying they’d love to travel like I do, but they’re scared. I want to change the narrative that women should feel unsafe wherever we go. If I can inspire other women who see me, an average woman, driving off-road, snowmobiling on glaciers, taking little boats to hostels in the middle of exotic locales, and staying in treehouses and boutique hotels, all the while meeting fabulous people around the world that treat me with kindness and seeing the sheer joy I feel by believing that the world is kind, I’ve done my job. My tendency to travel alone makes people feel confident about making changes in their own lives, however small. I recently told one woman who reached out, “Go to a rock climbing gym somewhere near you.” It takes bravery to go to a climbing gym by yourself, never having done it before, in another part of town—that’s a solo journey to me. It doesn’t have to be Patagonia to start.

I’ve traveled with family and friends, but I prefer traveling solo. When you travel by yourself, it really gets to the core of who you are as a person. You strip everything away, all of the titles, and reconnect with the person you are inside.

I’m going to Bali soon, and I have my first three nights booked, but then I have a month where I don’t know where I’m staying or what I’m doing. Every once in a while, I’ll look at someone else’s Instagram and think, Oh, I have to go there. Sometimes I go, but more often than not, I tell myself to stop so I can create my own vision and not just follow someone else’s. When I don’t know what I’m doing or where I’m going, it makes the experience more authentic—when there’s no destination, you can’t get lost.

I don’t think there’s really an end of the road for me. All I can picture is that in my 60s and 70s and 80s, I want to be doing exactly what I’m doing now. So long as I can keep returning to a place of my inner ten-year-old and where I’m most happy and vibrant, I’ll keep moving.