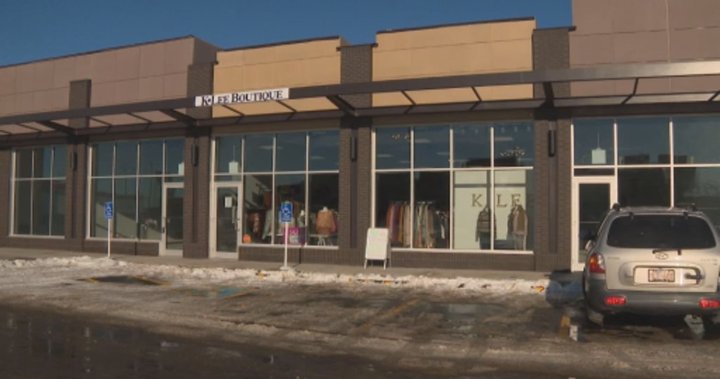 A local business in Sherwood Park, Alta., is back after it was destroyed by a fire more than a year and a half ago.

Kristin Lee Lang, the owner of the clothing store K-Lee Boutique, said she is happy to reopen.

“It feels amazing to be back.”

K-Lee Boutique and five other businesses were destroyed by an overnight fire on April 21, 2021 in Sherwood Centre, one of the oldest strip malls in Sherwood Park.

The six businesses, including several restaurants, a boutique and a hair salon, were a complete loss.

Lang said it has been a rough few years.

“COVID(-19) was terrible,” she said. “We had just started getting back on our feet and I was so excited because we had new lines, we had just gotten in a ton of new merchandise, our sales were really high in the last month, and then all of a sudden our store burned down.

Lang would have reopened her store at a new location right after the fire but said she still had several years left on her lease with First Capital Realty.

“Our lease company let us know through an email, ‘Just so you know, you’re still tied to your lease and as soon as we rebuild, we expect you to be back in’ — which was a shock,” she said.

Lang also said she learned the hard way about how important it is to have enough insurance coverage in case of fire.

“My new insurance plan is a lot heavier because it did not unfortunately cover everything,” she said.

“You never think your store is going to burn down. You never look at all those extra costs. Like, I didn’t realize we would be getting our new building back as a shell. So our mechanical and electrical alone was $60,000.”

The rebuilt K-Lee Boutique location reopened at the start of November, the same week Lang closed a store in Edmonton due to slow sales. As a result, she said she is particularly grateful for loyal customers like Helen Massie.

“It’s hard work, but they’ve set it up so beautifully and the sunlight is streaming in and it feels like nothing ever happened,” Massie said of the reopened boutique.

There is uncertainty for Lang when it comes to attracting new customers since the other spaces next door have not reopened.

“There hasn’t been a lot of walk-in traffic and we rely on that,” she said. “We pay premium in this location for that.

“So we’re hoping those other businesses get open immediately so that we have that walk-in traffic. We have that shopping centre back that we love so much.”

A 32-year-old man was arrested and charged in connection to the 2021 fire. Global News reached out to Strathcona RCMP for an update on those charges but did not hear back on Monday.

In April 2021, Strathcona County RCMP said Matthew Benjamin Flanagan had been charged with intentionally or recklessly causing damage by fire and mischief over $5,000.