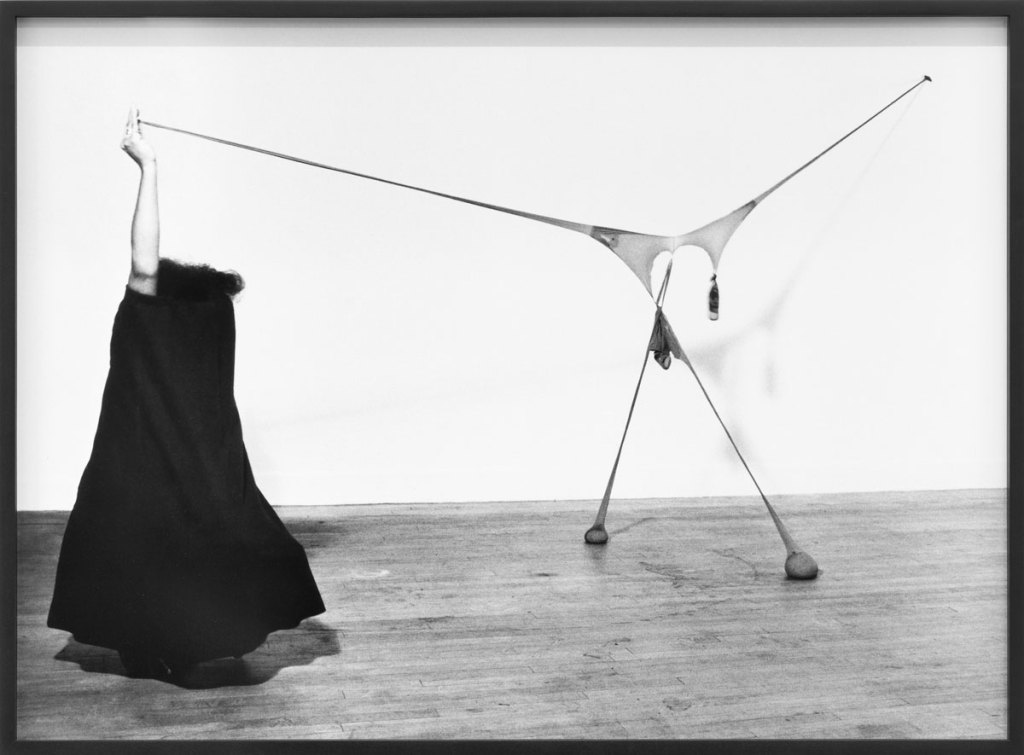 The 2023 Nasher Prize, presented by the Nasher Sculpture Center in Dallas, will go to Senga Nengudi, an artist whose influential five-decade career has undergone a reevalution over the past decade. As part of the prize, which recognizes “a living artist who elevates the understanding of sculpture and its possibilities,” according to a release, Nengudi will receive $100,000 and be honored at the Nasher’s spring gala in April.

Working across sculpture, installation, performance, dance, film, and photography, Nengudi is best-known for her “R.S.V.P.” series, begun in the late ’70s. These pantyhose sculptures are often filled with sand, then stretched and pinned to various points of a wall (often in a corner). They sag and droop in ways best described as poetic.

She and others would often perform within these installations, contorting their bodies to create even more dynamic stretches of the fabric.

“An artist’s supposed greatest desire is the making of objects that will last lifetimes for posterity after all,” Nengudi said in a statement. “This has never been a priority for me. My purpose is to create an experience that will vibrate with the connecting thread.”

Other major works include the 1978 performance Ceremony for Freeway Fets that she did with David Hammons and Maren Hassinger, as well as her “Water Composition” series in which colored water—in blues, reds, purples, and more—bulge in plastic sacs.

During a press lunch in New York on Tuesday to announce the winner, Jeremy Strick, the Nasher’s director, described Nengudi as an artist who “has developed an expansive practice that defies simple categorization…. In different ways and in different times, these varied forms are brought together in works that speak poignantly to the fragility and resilience of the human body, individual agency, and the importance of collaboration and friendship. Never have these ideas resonated more.”

Since 2011, Nengudi’s important art historical contributions have begun to receive mainstream recognition, most notably be her inclusion in the important exhibition “Now Dig This! Art and Black Los Angeles, 1960–1980,” which debuted at the Hammer Museum in Los Angeles in 2011 as part of the first Pacific Standard Time. That show was organized by curator Kellie Jones, who also considered Nengudi’s work in her 2017 book South of Pico: African American Artists in Los Angeles in the 1960s and 1970s.

Since then, Nengudi’s work has been the subject of numerous surveys across the country, and it has been prominently featured in the 2017 Venice Biennale and the 2019 rehang of the Museum of Modern Art. Also in 2019, Nengudi was the subject of a major traveling retrospective that debuted at the Lenbachhaus in Munich before making stops in Denver, São Paulo, and Philadelphia. In 2020, she was elected as a member of the American Academy of Arts and Sciences. In addition to MoMA, her work is also currently on view at the Guggenheim Museum in New York.

Nengudi’s “R.S.V.P.” series debuted at a 1977 exhibition at Just Above Midtown, the storied gallery founded by Linda Goode Bryant that was a nexus for Black artists working in various experimental and avant-garde moods. Nengudi’s work will feature in MoMA’s forthcoming exhibition “Just Above Midtown: Changing Spaces,” curated by Thomas J. Lax, which is set to open next month. Additionally, Nengudi’s work was recently acquired by the Dia Art Foundation, which will mount a long-term exhibition of her work, made between 1969 and 2020 at Dia:Beacon in February.

Established in 2016, past winners of the Nasher Prize include Doris Salcedo, Pierre Huyghe, Theaster Gates, Isa Genzken, Michael Rakowitz, and Nairy Baghramian. The winner is selected from a longlist of possible artists who are nominated by some 150 artists, scholars, curators, and museum directors.

The jury for this year’s prize also included Baghramian; Carolyn Christov-Bakargiev, director of the Castello di Rivoli; Lynne Cooke, a senior curator at the National Gallery of Art in Washington, D.C.; Briony Fer, an art historian at University  College London; Hou Hanru, artistic director of MAXXI in Rome; Yuko Hasegawa, chief curator of the Museum of Contemporary Art Tokyo; Pablo León de la Barra, a curator at large at the Guggenheim Museum; and Nicholas Serota, the chair of the Arts Council England.

“For me, Senga Nengudi has made an indelible, undeniable contribution to sculpture as we think of it today,” Cooke said during the lunch on behalf of the jury. Speaking of the “R.S.V.P.” works, she added, “What I think is so remarkable is that she found a very everyday, inexpensive material that’s associated with women and women’s bodies and used it to make an abstract art that thinks about the relationship of a body—a female body—to space.”