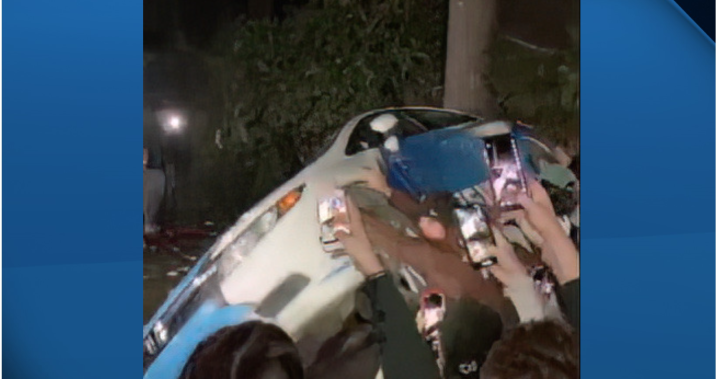 Trent University and police in Peterborough, Ont., said Sunday they are both investigating incidents of mischief — including the flipping of a security vehicle — coinciding with the university’s Homecoming and Head of Trent Regatta celebrations over the weekend.

Head of the Trent regatta returning to full form

Several videos posted on social media purportedly show a group of young people flipping a security vehicle onto its roof on London St. in the downtown. The vehicle belongs to Maxama Protection Inc., a Peterborough company.

Police also say a pedestrian was struck by a vehicle in the area of George and King streets on Saturday. No other details were provided on the incident.

The weekend also involved a number of reported thefts, mischief and nuisance calls which police say will be followed up over the next few days. In a statement on Sunday, police noted the “vast majority” of participants in homecoming and HOTR events were “peaceful and respectful.”

“Peterborough police had extra officers, including paid duty officers through Trent University, on patrol both Friday and Saturday to help with the anticipated increase in calls for service,” police stated.

In a statement, Trent University officials say they are “deeply concerned” to learn of the “isolated unsanctioned gatherings” in the city’s downtown that coincided with the university’s celebrations and regatta.

“The reckless behaviour that took place downtown over the weekend is completely unacceptable,” the university stated.

As part of the release, president Dr. Leo Groarke added: “We are very disappointed in the behaviour of these groups and individuals and will be working with police and the community to address the situation. Homecoming and HOTR events were carefully planned and we were clear with students about our expectations before this event.

“We will be pursuing disciplinary action for any students who were involved.”

The university and its security team will be working with city police to identify suspects involved in the incidents.

“Students involved will be followed up with in accordance with the Trent University Student Charter of Rights and Responsibilities, and the outcomes will be in proportion to the level of impact on our community,” the university stated.

“Student Affairs will work with these individuals to ensure they work to repair harm and rebuild trust.”

The university said prior to the weekend’s events, students were informed about their responsibility to be good neighbours and informed them about the consequences for disruptive, damaging or dangerous behaviour.

The university said Student Affairs and housing undertook a door-to-door campaign to speak to off-campus students, additional security was hired and funding was provided to municipal police to increase security. Chartered after-hours bussing was also provided to students.

“It is unfortunate and discouraging that the actions of a minority of individuals have overshadowed an overwhelmingly positive weekend where most students celebrated responsibly in planned events and activities,” the university stated.

Police and the university say anyone with any information or video evidence to share is asked to call the Peterborough Police Service non-emergency line at 705-876-1122, or Crime Stoppers at 1-800-222-8477 or online at www.stopcrimehere.ca

“We are committed to working with the police and our other partners in the community to prevent these types of incidents in future,” the university stated.