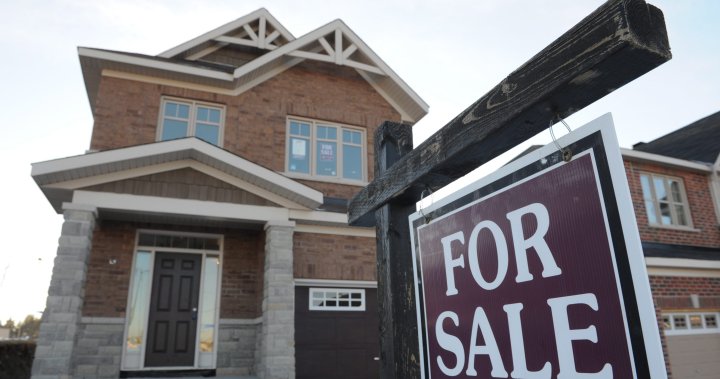 The average price of a home in Canada has dipped for the first time since early 2019, according to a new report, prompting Royal LePage to slash its national real estate outlook amid rising interest rates and economic uncertainty.

How much will home prices drop as interest rates rise? Depends where you live

Because of that, Royal LePage has lowered its annual forecast to estimate home prices will rise by just five per cent this year — down from the 15 per cent it predicted just three months ago.

“The peak was unexpectedly strong in the first quarter, and the slowdown in the second quarter was also unanticipated,” Royal LePage CEO Phil Soper said in an interview with Global News.

“So like everything economic during this pandemic era, we are scrambling to keep up with the changes and the pace of change.”

The change also reflects the softening real estate markets in the greater Toronto and Vancouver areas, which saw prices explode during the COVID-19 pandemic and remain high.

While those markets are expected to stay relatively flat through the rest of the year, house prices in Montreal are still expected to grow 12.5 per cent in the fourth quarter compared to 2021, while other major urban markets will see increases close to 10 per cent.

Sober says the national market is in a period of price adjustment, after the Bank of Canada raised interest rates in a bid to tamp down inflation. He expects the “unusual” downturn will stabilize for the rest of the year, unless there’s a sharp increase to the country’s available housing stock.

“That hasn’t happened,” he said.

“What has happened is there’s been a drop in the overall number of transactions because there are fewer homes for sale and fewer buyers. So they move to the sidelines, both sellers and buyers.”

A Desjardins Economic Studies report released last month predicts that from the peak of national home prices in February of this year to the end of 2023, the average sale price in Canada will drop 15 per cent.

Virtually all markets are expected to see some drops, but some could see value erode more rapidly.

In the Maritimes, for example, prices in Nova Scotia and New Brunswick are expected to fall 20 per cent over that timeframe. Ontario and Prince Edward Island could see drops of 18 per cent, with British Columbia giving back as much as 15 per cent.

Soper says the reprieve in prices should create an opportunity for Canada to catch up on creating new, affordable housing — but he predicts that isn’t likely.

“The challenge is homebuilders are not much different than homebuyers and sellers: they get spooked by uncertainty and they tend to make smaller and more conservative commitments,” he said.

“So unfortunately, what we’ll see during this period of slower activity levels, less listings with less transactions, we will also see fewer completions.”

The Canadian government is looking to double the annual pace of homebuilding and add 3.5 million units to the country’s housing supply over the next decade, according to the latest federal budget.

— with files from Global’s Craig Lord