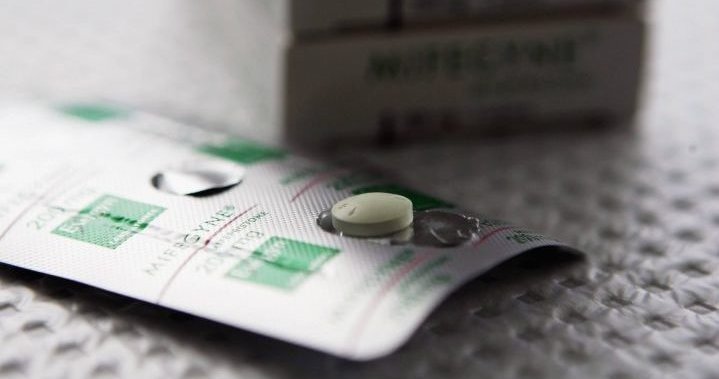 Quebec will no longer require people wishing to terminate a pregnancy to undergo an ultrasound before accessing the abortion pill, according to a physicians’ order Thursday.

A statement released by the Quebec College of Physicians said that until now, the order required a pelvic ultrasound to “ensure the gestational age and location of the pregnancy,” before a doctor could prescribe the medication.

This requirement is officially lifted as of Thursday, said the statement.

“(The ultrasound requirement) has been under study at the College since last January in order to update the directives and to promote access to this medication, in light of the evidence collected and analyzed on the use of the abortion pill,” the statement reads.

Additionally, Quebec doctors will no longer need to undergo specific training on the medication if they are not familiar with abortion practice. The order says physicians will now be instructed to use the recommended guidelines and their clinical judgement.

“The role of the College is to ensure the protection of the public, but it also has a duty to ensure that its rules reflect advances in science, evidence, and the evolution of society. That’s what we’re doing,” wrote Doctor Mauril Gaudreault, president of the order.

In Canada, the right to abortion has been decriminalized and legal since the Canadian Supreme Court’s R. v Morgentaler ruling in 1988.

The court found that the Criminal Code provision on abortion violated a woman’s right to “life, liberty and security of the person” guaranteed under Section 7 of the Charter. Chief Justice Brian Dickson wrote: “Forcing a woman, by threat of criminal sanction to carry a foetus [sic] to term unless she meets certain criteria unrelated to her own priorities and aspirations, is a profound interference with a woman’s body and thus a violation of her security of the person.”

The procedure, however, is not always easily accessible for those who cannot make arrangements to visit a clinic.

Health advocates in the country have urged that barriers to accessing abortion pills need to be addressed immediately as the procedure’s future in the United States comes under threat.

Pro-abortion groups have spent years pushing for universal coverage for medical abortions, which can be done safely at home instead of requiring a trip to a hospital or clinic.

READ MORE: Abortion pills can be hard to get in Canada. Demand from the U.S. could make it harder

The abortion pill consists of mifepristone and misoprostol, taken as a combined regimen of two medications that come packaged together under the brand Mifegymiso.

Abortion pills were approved by Health Canada in 2015 but didn’t become available until the beginning of 2017.

Various restrictions, such as a requirement that only specially trained physicians, and not pharmacists, prescribe the drug and watch the patient take the pill are some of the aspects that advocates say are accessibility barriers.

As of 2019, Action Canada for Sexual Health and Rights counts 49 total abortion providers in Quebec.

By all accounts Quebec far surpasses every other province with regard to its abortion access, with the closest second being Ontario, where there are 38 providers in total.

These numbers are relational to provincial population: Quebec has a population of 8.5 million, Ontario 14.2 million and British Columbia 5 million, as per the 2021 census.