Prey, Uncharted on Netflix, and every other new movie to watch at home 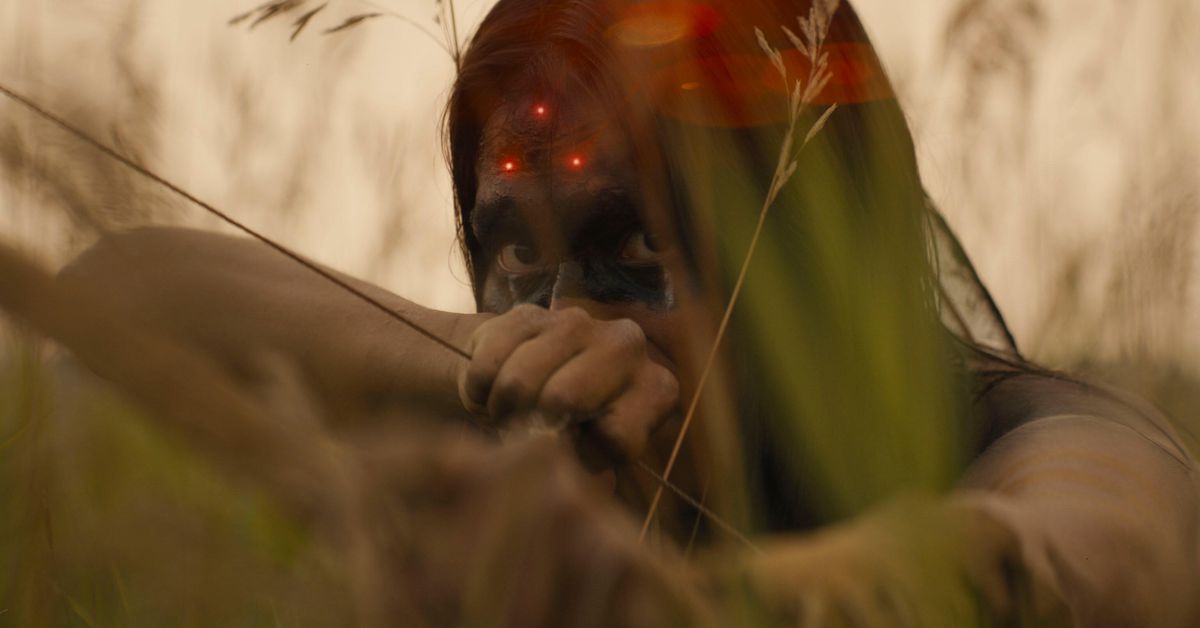 That’s not all! There’s also a new Ron Howard movie about the Thai cave rescue, a slasher on Peacock, the new Minions movie, an intriguing horror movie starring Rebecca Hall, and so much more.

Here’s everything new you can watch at home this weekend.

Where to watch: Available to stream on Hulu

Dan Trachtenberg’s prequel to the long-running Predator film franchise stars Amber Midthunder (Hell or High Water) as a Comanche warrior in 1719 who discovers the prey she thought she had been stalking is in fact a vicious headhunter from another world hellbent on killing humans for sport.

Trachtenberg, who made the similarly pared-down franchise extension 10 Cloverfield Lane, has one major thing to offer in Prey: efficiency. This is a movie about a young woman on a collision course with a spine-ripping alien dude in a cool skull mask. The other members of Naru’s tribe are there to naysay and/or become Predator fodder. A late-arriving band of fur traders also offers up some huntable bodies. Trachtenberg finds ways to present the efficiencies of their short, brief lives with a flourish: He sets up action with overhead shots, sometimes from far above for lay-of-the-land establishing shots, and sometimes giving the camera just enough space for a full view of obstacles like a particularly sticky mud pit.

The filmmakers have the right idea of what makes an Uncharted action set piece, whether they’re molding a sequence after something from the games, or inventing something entirely new that would fit within one of them, like a bit involving characters battling inside pirate ships hoisted into the air by airplanes. But the execution is flat, inconsequential, and boring. Not even a remix of the Uncharted theme during a climactic shootout, padded up to that point by generic action muzak, brings joy.

Where to watch: Available to stream on Disney Plus

Chris Evans (Avengers: Endgame) stars in the 2022 Toy Story spinoff Lightyear as Buzz Lightyear — the human, not the toy — a Star Command Space Ranger who accidentally crashes his exploration vehicle on an inhospitable alien planet. Stranded with no way home, Buzz must find a way to manufacture a new fuel source to power his ship, all while fighting off the mysterious Zurg and his army of killer robots.

As a Flash Gordon-style space adventure packed with fast-moving alien creepy-crawlies, snappy banter, and big explosive action, Lightyear is perfectly enjoyable. There’s a lot of funny business about Buzz narrating his actions as if he’s the hero in a space serial, and a strange, silly scene about the sandwiches of the future. It’s no wonder all this would appeal to Andy and his generation, who likely see it much like 6-year-olds in our world might: as an exciting rush through a world packed with killer robots, icky monster-bugs, and cool laser swords.

But Lightyear is so clearly calibrated to be something more: a thoughtful meditation on the passage of time. Its biggest ideas all point to the need to connect with people and live in the present rather than the past. It’s a warning about all the things we might miss if we fixate on past mistakes instead of letting them go. And on that level, the film never hits as hard as it’s meant to.

Where to watch: Available to stream on HBO Max

Mamoru Hosoda’s sci-fi fantasy anime Belle follows the story of Suzu, a reserved high school student living in a rural village. Mourning the loss of her mother, Suzu finds solace and validation by escaping into the massive online world of “U,” where her virtual alter-ego “Belle” is a globally recognized pop singer. After one of her concerts is interrupted by a mysterious figure known as the Dragon, Suzu sets out in search of him in hopes of better understanding the unspoken connection they share with one another.

The kid-friendly moral of Beauty and the Beast (or at least the 1991 Disney version) is a simple one: “Don’t judge a book by its cover.” With the ambitious, decisively uncynical new anime movie Belle, writer-director Mamoru Hosoda adds to a long list of adaptations by updating the story for the internet age. Carefully fabricated online personas replace magical curses, and enchanted singing candlesticks transform into mewling AIs. But the director of Mirai and The Girl Who Leapt Through Time pushes the core message one step further by emphasizing how connection is a two-way street. It isn’t enough to recognize someone else’s true self without offering vulnerability in return. Produced by Hosoda’s Studio Chizu, this lush, spectacularly animated vision argues for the life-changing bonds that can develop when people shed their digital defenses.

Where to watch: Available to stream on HBO Max

Kenneth Branagh’s semi-autobiographical movie about a young boy growing up in late 1960s Belfast was at one point an Oscar frontrunner, and it finally makes its streaming debut nearly a year after its release.

From Oli Welsh’s piece on why it deserved to win Best Picture:

Don’t mistake any of this for cynicism: Belfast is a very sincere, heartfelt film that strives to honor a time and place that clearly mean a lot to Branagh. It has great clarity on the painful dilemma at its heart: Should the family abandon the home they love and the community that defines them, or stay and risk getting eaten alive by the Troubles? It’s also an entertaining movie, and beautifully performed. The sunny-side-up Hill is a little over-eager as young Buddy, but Dench, Hinds, Dornan, and Balfe all put in charming and committed performances, with the gorgeous younger couple adding some unrealistic but far from unwelcome movie-star glamor to the kitchen-sink drama. Perhaps best of all, Branagh knows the limits of our indulgence, and he wraps his trip down memory lane up in a tidily effective 98 minutes.

Where to watch: Available to stream on Prime Video

Another 2022 Oscar contender, this one is the latest from Paul Thomas Anderson. A love letter to the place (the San Fernando Valley) and era (the 1970s) he grew up in, it stars Alana Haim, Cooper Hoffman, Sean Penn, Tom Waits, Bradley Cooper, and Benny Safdie.

From Joshua Rivera’s piece on why it deserved to win Best Picture:

Hangout films like Licorice Pizza can be deceptively straightforward; works of meticulous craft, constructed to feel like breezy walkabouts. This is contrary to what people mean when they describe a film as “awards bait,” which denotes a palpable sense of effort. This is the bias that makes comedies — and Licorice Pizza arguably is one — into difficult awards fodder. But Licorice Pizza is a complex portrait of two young people playing at things that they’re not, a romance that isn’t really about two people in love as much as it is two people using each other to prove something to themselves in the early moments of a tumultuous decade. The world is falling out from under everyone, and Gary and Alana are too terrified to find out what it means to take their place in it.

Where to watch: Available to rent for $6.99 on Apple, Vudu

Rebecca Hall (The Night House) stars in Andrew Semans’ 2022 psychological thriller Resurrection as Margaret, a successful pharmaceutical executive and single parent whose carefully organized life is thrown into disarray when David (Tim Roth), a charismatic and manipulative man from her past, returns to torment her.

Resurrection is bound to be divisive. It’s actively trying to provoke its audience, which some might find more upsetting than anything that actually happens in the film. And that’s fair enough. But whether or not it’s to anyone’s particular taste, the fact remains that this is an audacious film that asks viewers to take its hand and come along to some particularly dark, surreal, and grotesque places. Throughout that descent, it holds on with a grip that’s tight enough to keep it from spinning out into ridiculousness. If a film this bizarre can produce gasps instead of giggles, that itself is a remarkable achievement.

Where to watch: Available to stream on Prime Video

Where to watch: Available to stream on Apple TV Plus

The 2022 computer animated fantasy comedy Luck follows the story of Sam (Eva Noblezada), the so-called unluckiest person in the world, who unwittingly stumbles into a centuries-long feud between the forces of good and bad luck.

This Korean action movie from The Villainess director Jung Byung-gil caught our eye when the trailer dropped in July, and it’s finally here to blow your minds (and maybe literally, in the case of the protagonist). Carter follows a man thrust into the middle of a secret mission with a bomb in his head. He must complete his mission or get his head blown up — you know the vibes. With exhilarating action sequences filled to the brim with high-wire stunts, get your popcorn ready.

Where to watch: Available to stream on Peacock

The latest horror movie from Blumhouse Productions is set at a conversion camp, stars Kevin Bacon, and is the directorial debut of three-time Oscar-nominated screenwriter John Logan (Gladiator, Skyfall).

Minions: The Rise of Gru

Where to watch: Available to rent for $19.99 on Amazon, Apple, and Vudu

Minions: The Rise of Gru, the fifth installment in the Despicable Me movie franchise and the harbinger of many, many memes, follows the story of a young Gru (Steve Carell) and his rise to supervillainy with the help of a colorful army of mischief-making minions.

Minions: The Rise of Gru benefits from low expectations. Arriving in movie theaters just two weeks after Pixar’s high-profile, frustrating new science fiction epic Lightyear, the latest extension of Illumination Entertainment’s most popular franchise doesn’t have to be groundbreaking, memorable, or even particularly hilarious to make a splash. In a dry summer that’s light on big blockbusters, The Rise of Gru — the fifth feature highlighting gibberish-spouting, indestructible, blobby henchmen the color of bananas (which happen to be their favorite fruit) just has to do its business, get out, and not dawdle in the mind for very long. In that respect, The Rise of Gru does the job. This is neither a uniquely marvelous film nor a teeth-gnashing pain. It’s OK in the moment, and it evaporates as soon as the end credits roll.

This German dark comedy follows a con man whose life seems to be dictated by karmic balance, and who tries to “offset” any good things that happen to him just to be safe. When he falls in love and joins the mob, things get even more difficult for him.

OK, Netflix. Not one, but two karma-centric movies this week.

This Mexican romantic comedy follows a fashion designer who is convinced she has horrible luck and believes her younger sister is blessed with good fortune. That belief is pushed to the brink when her sister and an old crush get engaged.

This romantic comedy from Tom Dey (Shanghai Noon, Failure to Launch) follows two young people facing intense pressure from their parents to get married. They don’t know each other, but decide to fake a relationship ahead of a series of weddings to attend. Longtime rom-com watchers will likely be able to figure out what happens next!