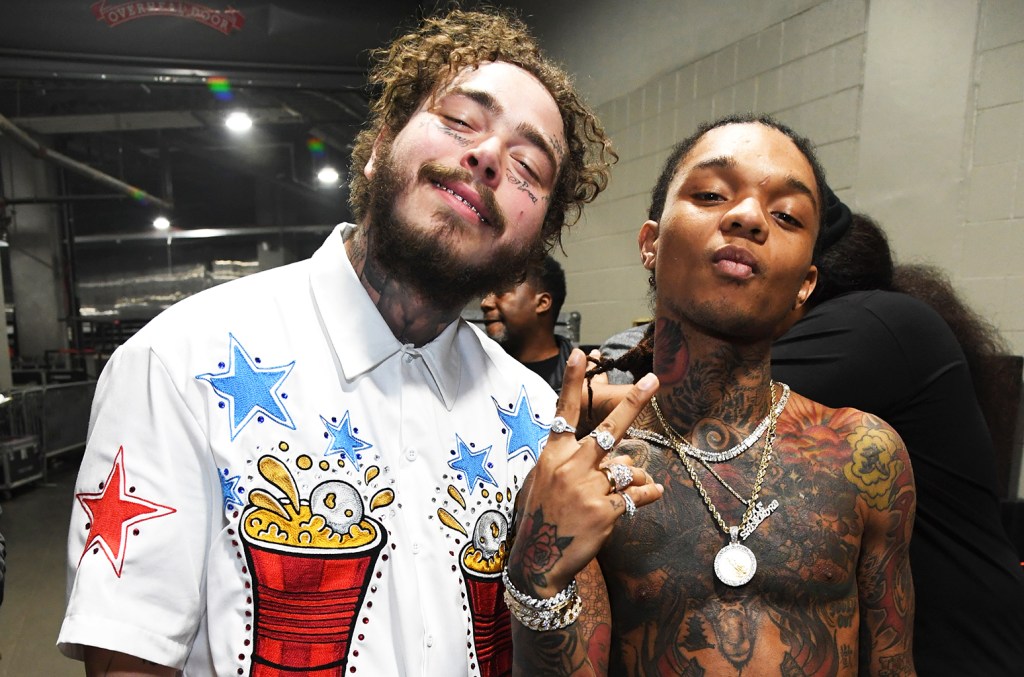 Post Malone and Swae Lee celebrated a major milestone this week when their smash Spider-Man: Into the Spiderverse single “Sunflower” became the highest-certified single in RIAA history. The pair took a photo op with their gaudy hardware on Monday (Nov. 14), showing off their 17x-platinum award, posing alongside co-producer Louis Bell and co-writer Billy Walsh.

The 2018 single leapt into first place over the previous record holder, Lil Nas X and Billy Ray Cyrus’ “Old Town Road,” which previously held the record at 15x platinum. In addition to appearing on the Spiderverse soundtrack, the song was also on Posty’s third album, Hollywood’s Bleeding. It was a big haul for Posty on Monday, when he also picked up 14 other pieces of RIAA hardware, including a 14x-platinum plaque for “Congratulations” and a 10x-platinum one for “Psycho,” while his debut single, “White Iverson,” hit 10x-platinum as well.

TMZ reported that Rae Sremmurd’s Swae Lee was feeling the love from fans, who he thanked for their continued support. “You guys made history with us!” he said. “And to post and [Spiderverse character] Miles Morales, glad the music could get the attention and love it deserves. So much more to come! SREMMLIFE!”

The site also reported that Malone gave huge kudos to Swae Lee for being the “secret sauce” behind the moving hip-hop ballad, saying that his rhyme partner was very involved in the arranging of the melodies and did the “heavy lifting” on the song. The “Sunflower” video has racked up nearly 2 billion views to date.

Malone is getting ready to wrap the North American leg of his Twelve Carat Tour, with a pair of shows at Crypto.com Arena in Los Angeles on Tuesday and Wednesday (Nov. 16) nights.

See the pair with their plaque below.