Philadelphia braces for contentious midterm elections – and what comes next – National 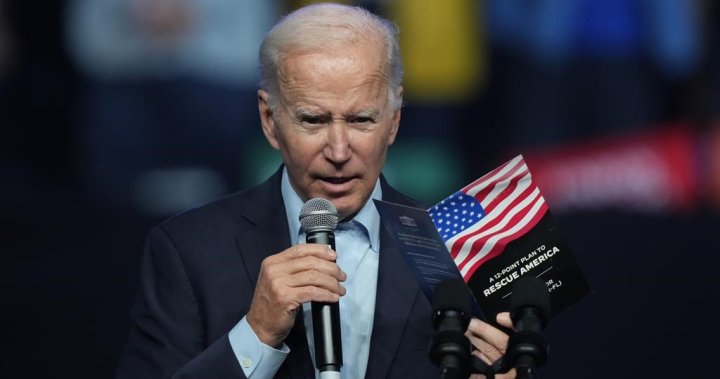 The Enon Tabernacle Baptist Church is in a leafy section of Northwest Philadelphia. Driving the 30 or so minutes from downtown, you travel along narrow, winding roads through the fall colours of Fairmont Park, along the Schuylkill River and through Germantown’s quiet neighbourhoods.

Enon Tabernacle is a huge building, said to be the largest African American church in the state, and seats thousands in comfortable, red-cushioned pews. Massive screens and speakers amplify the service, which features a full band to add music to prayer.

U.S. far-right could see a midterm boost. What would that mean for Canada?

It is a calm and calming place, one that feels very much removed from the fractious political battles taking place across America. But politics was nevertheless on Rev. Alyn Waller’s mind on a cloudy Sunday morning.

Sitting in his office between morning services, Waller points to a black and white photo featuring him as a child sitting with Martin Luther King Jr. The photo was taken in 1967, just before King’s assassination.

Reflecting on the political challenges of America in 2022, Waller expressed concern that his generation, the first to grow up in the Civil Rights era, may have forgotten some of the lessons leaders like King tried to teach them.

“If I want to be equal to you,” Waller said to a white reporter, “I have to be faster than you. If I want them to see me as the same as you, I’ve got to be better than you.”

“That’s how I was raised. And I think we raised our children to say, you know what? It’s all clear now, we made it right,” Waller said.

“And I think that’s some of the animus and some of the anger our children have, because this stuff is hitting them and they’re confused.”

3:06
U.S. election: 2 arrested with guns near vote-counting site in Philadelphia


Whatever the outcome of Tuesday’s election, Waller said he and his community need to be prepared. In the case of a “red wave,” Waller said, minority communities in America have to worry about institutions being turned against them, threatening hard-won victories on issues like voting rights. And in the seemingly unlikely chance there’s a “blue wave”?

“We’re going to have to deal with anarchist stuff,” Waller said of the growing possibility of political violence in America.

“We have to be organized and ready to protect our neighbourhood and protect our children.”

But the photo of King reminded Waller of something else.

Pennsylvania is one of the most closely watched states in this election cycle because the stakes are extremely high.

Not coincidentally, it’s also one of 10 states identified by the nonpartisan Brennan Centre for Justice as particularly at risk for voter intimidation and “the disruption of the voting process.”

The nasty fight over the Senate seat vacated by Republican Pat Toomey has the potential to determine the fragile balance of power in that chamber – and with it, President Joe Biden’s ambitions for the next two years.

The tight race has pitted Democrat John Fetterman – the state’s lieutenant governor – against television personality Dr. Mehmet Oz. Philadelphia television stations have been veritably carpet bombed with ads from both campaigns, most of which include attacks that may sound shockingly negative to Canadians.

According to polling analysis site FiveThirtyEight, Fetterman is ahead by a mere 0.4 percentage points heading into Tuesday’s vote, with Oz significantly narrowing the gap between them over the last three months.

The high stakes drew Biden and former presidents Barack Obama and Donald Trump to the Keystone State on Saturday, all stumping for their candidates in and around Pittsburgh and Philadelphia.

“Sulking and moping is not an option … On Tuesday, let’s make sure our country doesn’t get set back 50 years,” Obama told a crowd of hundreds in Pittsburgh.

“If you want to stop the destruction of our country and save the American dream, then on Tuesday, you must vote Republican in a giant red wave,” Trump said.

The rhetoric from both Democrats and Republicans is framing these midterm elections as a “make or break” issue for the world’s dominant superpower. Democrats charge a Republican victory would gut social security, threaten to further limit access to contraceptives and safe abortions, and pave the way for tax breaks for the wealthy.

Republicans have trumpeted concerns over crime and economic struggles due to the inflation that is gripping much of the world.

But Trump is said to have a particular animus toward Pennsylvania, having argued – falsely, but repeatedly – that he won the state in the 2020 presidential election.

Last month, Rolling Stone – citing multiple unnamed sources – said if there is not a decisive winner in Pennsylvania’s Senate race Tuesday evening, that the former president and his supporters have discussed “scorched-earth legal tactics” to challenge the results.

The magazine’s sources also suggest Trump views the 2022 midterms as a dress rehearsal for the kind of tactics his supporters could deploy in the 2024 presidential election – a race he has strongly hinted he’ll run in.

The Philadelphia Republicans did not return Global’s interview request.

Get out the vote efforts to counter voter malaise

On Saturday afternoon in West Philadelphia’s Elmwood Park, a group of about 50 labour organizers gathered for a lunch of hoagies and snack-sized bags of Doritos.

The group – members and volunteers for Unite Here, a union representing hotel workers, gaming workers and school cafeteria staff – was a fraction of the 400 door-knockers active that day, hoping to drive the vote for Fetterman and Josh Shapiro, the Democratic candidate for governor.

It was a short reprieve for sandwiches and speeches, held around Philadelphia’s public art tribute to “the American worker,” before they resumed their get-out-the-vote efforts. According to organizers, they had already identified 70,000 voters committed to the Democrats. With three days to go before the midterms, their ambition was to pull another 10,000.

U.S. midterm elections: Here’s why the stakes for Canadians are much the same

One organizer said they’re not only canvassing for their preferred candidates, but trying to combat voter malaise after nearly a decade of political turmoil across the country – and the sinking suspicion that, whoever is in power, it doesn’t make much of a difference in the lives of folks in places like West Philly.

A lot of what Shantyl Woodberry, one of the union’s lead canvassers, hears at the door – particularly in inner city neighbourhoods – is about gun violence.

“Also a lot of parents where, there’s just nothing for their kids to do,” Woodberry said.

“To me, that goes with the gun violence, because now they’re bored, and now they’re out there on the streets and these are the things they’re getting into because they don’t have these after-school programs, they don’t have recreation centres or things where they can actually excel.”

Some organizers said the Supreme Court’s decision to overturn Roe v. Wade, eliminating the constitutional right to abortion and paving the way for greater restrictions, has been a significant issue at the door. But Woodberry said it can be a difficult conversation at some doors – particularly in communities with strong religious beliefs.

“The way I approach people is, listen, (the right to) abortion can be taken away. Whether you believe that right or not,” Woodberry said.

Leaving West Philadelphia and driving back to midtown, amid rows of houses and faded storefronts and falling leaves, there was a series of simple and stark reminders about how some Americans are viewing their current political climate.

The signs were everywhere around Philadelphia, and it is somewhat of a mystery who is behind them. A local labour organizer suggested it was the Democrats, finally taking the rhetorical fight to a Republican Party unbound by conventional political norms.

Billy Pen, a local non-profit newsroom, traced it back to a group of students. “Paid for by Philly Votes” read the disclaimer at the bottom of the American political advertising, although the newsroom could find no records of any such political action committee in the records.

Whoever is behind the signs, they’re all over the place – dotting the highway from the airport, in Philadelphia’s Old City and Centre City neighbourhoods, and in the predominantly Black neighbourhood in West Philadelphia.

U.S. midterms could have ‘negative impact’ on Ukraine if Republicans limit aid: experts

The signs make no direct mention of who “the racists” are. But with the state of politics in America, in 2022, they probably don’t need to. Even if folks don’t agree with message – they get the meaning.

The signs also point to the political fracturing the country has and will continue to face, no matter the outcome on Tuesday.

With a file from the Associated Press.