NBA’s City Edition jerseys for 2022-23 are out. Here are some of their backstories 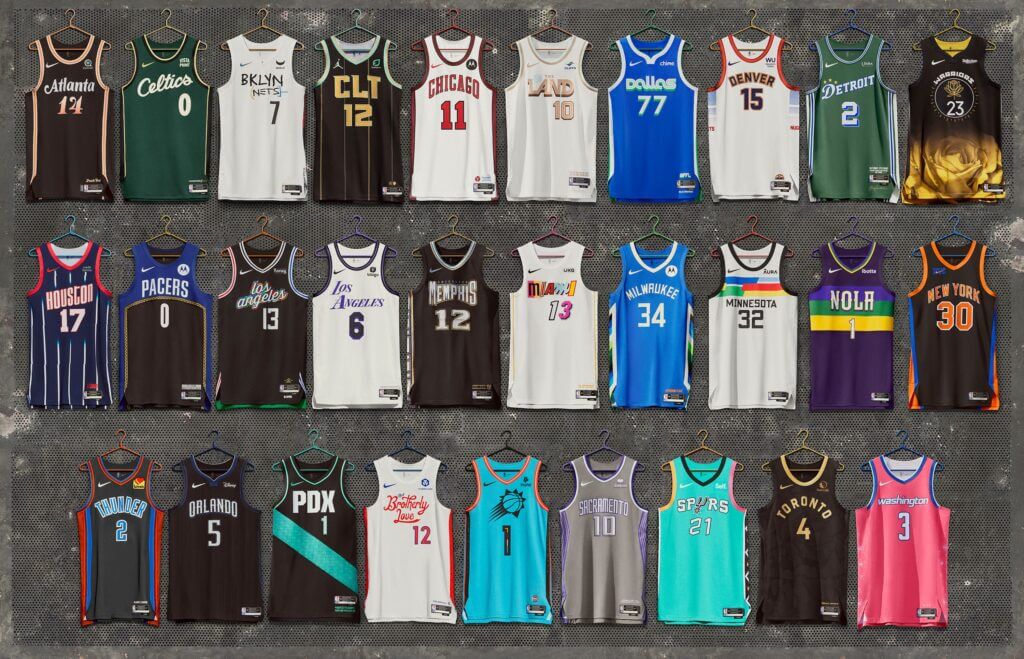 The NBA released its newest slate of City Edition jerseys, the ones teams will wear for the 2022-23 season. These uniforms, from jersey to shorts, usually carry some kind of thematic tie to the franchise’s home city.

The Athletic spoke to Jesse Alvarez, Nike’s product director of men’s basketball, to get a sense of how some of the most notable City Edition jerseys were designed and the details fans should look for when watching their teams play.

I want to start with the Spurs jersey. Can you walk me through the design and the inspiration for it?

The Spurs, I think, as a lot of people remember, have one of the most iconic All Star Game uniforms that we’ve done, just in the world of jersey culture. So you can see some pretty clear nods to that in terms of just the color and the vibe. That was really the focus for that one, to be able to tie that in. You asked about some of the details: I think the belt buckle ‘SA’ and the Spur logos on the belt hook was just like a really nice way to round out and add a subtle detail to highlight the All Star uniform that they’ve been synonymous with.

So I recognize the coloring for that when I’m looking at those jerseys. The Pistons ones are green, a color I don’t associate usually with Pistons colors. What happened there?

Detroit has an amazing story. One of the things about that story is St. Cecilia. So St. Cecilia is really a place where players used to go run and play pickup basketball. And so that color, the green, is inspired by the actual St. Cecilia. That, coupled with the iconic details of the short patch, you’ll actually see like a stained glass or a grab that’s inspired by the stained glass that shows up at St. Cecilia, with a 313 logo at the center of it just as a way to weave those stories together. The mantra of St. Cecilia was ‘Where stars are made, not born.’ So it just really packages that story all together to bring that to life.

Isiah. Magic. Gervin. How a Detroit church gym became the birthplace of legends

Did you guys send people there to kind of look through the gym and just walk through it?

Yeah, so we actually partner with the team, and so the team was over there. They’re sending us pictures, you name it. Anything that we needed, we got to be able to really bring that to life. Like with any uniform, really, it starts with the team. They know their fan bases the best. And so that’s where all those points of inspiration are coming from.

For you, do you have a favorite jersey?

You know, it’s funny, I was just telling someone it’s hard to have a favorite. Especially, they all feel like your kids. But I think, just right behind you, Chicago. I really like Chicago. I think how the municipal Y shows up in a number of different ways. And the symbology behind it, like uniting a city and how the Bulls at the center of the the Y on the side profile. I think this is a great representation of how a team is at the heart of a city. So Chicago is where I live.

I liked the color pattern on the Timberwolves one, but obviously it’s not something that’s associated with the Wolves. What is that about? What makes that unique?

One of the unique things about City Edition (jerseys) just in general, before I answer your question, is that with each story from an organization, they get to take it to wherever place they want to go. So Minnesota is known as being a creative hotspot for artists of all sorts. That (jersey) is a nod to some of the creative community. So one of the things that makes that uniform unique is that the pattern that you see in the uniform, it actually gets cut in a different way for every uniform. So every uniform is a unique one, just kind of as a way that each creative is unique in their own way. So that’s really how that story comes to life.

So you guys have like a big pattern of all these colors. Each swatch is different for each uniform?

Think about it more in in terms of when you think about how a uniform was made, each piece gets cut, so no two pieces are the same. So when they’re sewing those things together, every uniform is going to be slightly different, just like a fingerprint.

I know sometimes you guys collaborate not only with teams but with like certain individuals on creating the jerseys. Is there anyone notable here that helps you with the creation, with the ideation of some jerseys?

Yeah, Detroit’s a great example. Big Sean is the creative director with the Pistons, so he’s somebody who helped bring that to life. Right behind you, you have KITH with the New York Knicks. Those are those are the two teams that are top of mind. Just kind of highlight some of the names that also work with organizations to bring their city edition uniforms to life.

I was looking at the Hornets’. That’s the angriest hornet I’ve ever seen in my life.

It’s an aggressive hornet. Really cool story, I think, centered around the Mint. So one of the cool things — I’m not sure if you were able to take a look at it — but the pinstripes are actually a nod to the Mint. The Mint is, you know, the source of inspiration for that uniform. The gold lettering with the mint trim, just harkens back to the financial inspiration with the Mint being in Charlotte.

And the last one, I heard you talking about the Heat jersey. Can you kind of walk me through that one, especially the rope on the side. That seems to be a really cool detail.

So if you’ve ever turned on a game for the Heat, you’ll see that there’s actual yellow rope that surround the cord. They use the yellow piping to be able to be inspired by that yellow rope that you will see during the game. Their concept is kind of their chapter two of their mashup that they introduced last year.

This year, they flipped the color to white and then they took different components from previous iconic elements of their identity and mash those up together to be able to have this customized look. So you’ll see elements of their Floridians, their white hot, vice versa. All those different kinds of stamps in time that have made up the Heat organization, all mashed up into one uniform.

(All photos courtesy of the NBA)