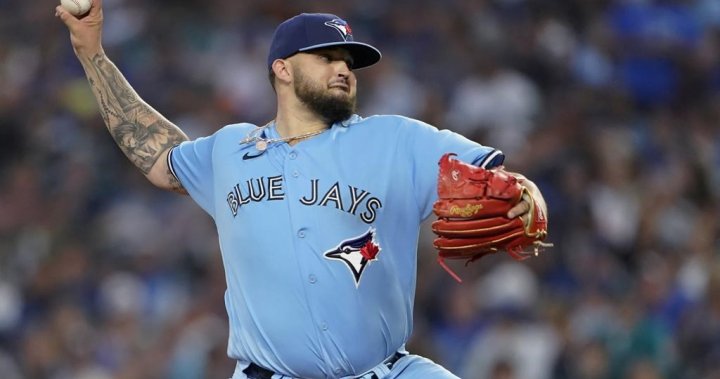 SEATTLE (AP) — Carlos Santana hit his first home run since being acquired by Seattle, lining a two-run shot off Toronto starter Alek Manoah that lifted the Mariners to a 2-1 win over the Blue Jays on Saturday night.

Santana’s homer came in the seventh inning after Seattle had managed just one hit off Manoah through the first six. J.P. Crawford led off the seventh with a single and Santana ambushed a fastball in the middle of the plate for his fifth home of the season and his biggest hit to date with the Mariners.

Santana was acquired in late June from Kansas City for a pair of pitchers.

Robbie Ray faced his former team for the first time and threw six innings, allowing just three hits and one run on George Springer’s 16th home run of the season leading off the sixth inning. Ray won the AL Cy Young Award last season with the Blue Jays, but did not travel to Toronto when the teams met in May due to border restrictions related to the COVID-19 vaccine.

4:18
Jays Care Foundation campaign aims to get more kids on the diamond


Ray struck out six and pitched out of a major jam in the fifth inning when Toronto loaded the bases with no outs and failed to score. Over his past six starts, Ray has a 0.91 ERA with 11 walks and 46 strikeouts.

Matt Brash (2-3) struck out a pair as part of a perfect seventh inning, including a 13-pitch strikeout of Lordes Gurriel Jr. that included nine foul balls.

Pitching for the third straight day, Diego Castillo faced trouble in the ninth after one-out singles by Vladimir Guerrero Jr. and Alejandro Kirk. Castillo got groundouts from Teoscar Hernández and Matt Chapman for his fifth save.

Manoah (9-4) was the equal of Ray, pitching 7 1/3 innings but took the loss. Manoah didn’t allow a hit until Ty France’s one-out double in the fourth and allowed three baserunners total until the problems in the seventh.

All of Toronto’s offense came from the one swing by Springer. It was his 23rd career home run against Seattle. He’s hit 13 of the 23 at T-Mobile Park.

Seattle made a flurry of moves to reinforce its bullpen, recalling Brash and Matt Festa from Triple-A Tacoma. RHP Ken Giles was placed on the 15-day injured list with right shoulder inflammation and RHP Erik Swanson was placed on the paternity list.

Seattle also optioned rookie starting pitcher George Kirby to Tacoma. With an off day on Monday and the looming All-Star break, it’s an easy way for Seattle to manage Kirby’s innings. Right-hander Jacob Barnes was selected from Tacoma to take Kirby’s spot.

Catcher Luis Torrens (shoulder) was also activated from the 10-day IL and C Andrew Knapp was designated for assignment.

Blue Jays: Toronto manager Charlie Montoyo was not ready to name a starter for Sunday’s series finale but it won’t be RHP Kevin Gausman. Montoyo said Gausman would not return to the rotation until Tuesday at the earliest. Gausman was hit on the ankle in his last start and was scratched from his scheduled turn on Thursday.

Blue Jays: Toronto is expected to make it a bullpen day and announce a starter on Sunday.

Mariners: RHP Logan Gilbert (10-3, 2.61) looks to join Houston’s Justin Verlander as the only 11-game winners in the American League. Gilbert allowed two runs in 5 1/3 innings in his last start against San Diego. Gilbert has pitched at least five innings in every start this season.