“It’s a massive honour:” 10 soldiers from Calgary regiments in London for royal funeral 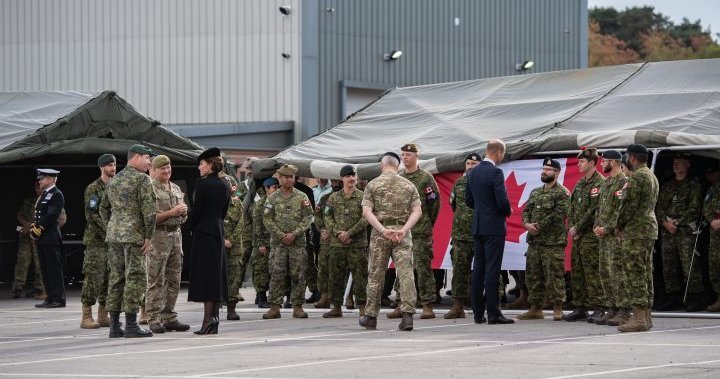 Ten soldiers from Calgary regiments have travelled to London to take part in the royal funeral procession of Her Majesty Queen Elizabeth II on Sept. 19.

Five soldiers from The King’s Own Calgary Regiment (Royal Canadian Armored Corps) and five from The Calgary Highlanders of Canada are part of a group of about 80 Canadian Armed Forces (CAF) members taking part in the funeral on behalf of all past and present CAF members.

According to a CAF spokesperson, the Canadian contingent is made up of representatives from the CAF military units “with which Queen Elizabeth II had a special relationship.”

The Canadian soldiers are part of the Commonwealth contingent which is also made up of soldiers from Australia and New Zealand.

Lt.-Col. Ryan Hartman is the commanding officer of The Stormont, Dundas and Glengarry Highlanders, which is headquartered in Cornwall, Ontario.

He arrived in London on Tuesday.

Hartman is a reservist from Ottawa who served in the regular army and the reserves for 30 years, including three deployments to Afghanistan.

“It’s been very humbling to come to London, the heart of the Commonwealth,” Hartman said.

He said the focus has been on preparation for the event but on a personal level, there’s been much reflection.

“Just walking the streets of London to see the average citizen and the impact it has had on losing Her Majesty. Whether you are a monarchist, or a republican, there’s none of that. You don’t even hear the chatter. It’s surreal,” Hartman said.

“It’s huge, it’s a loss. It really is. To me she was ‘service before self,’ which is the epitome of what we would aspire to as soldiers. It’s like losing a piece of the family.”

He said it’s been a very somber moment to see individuals reflect on the death of Queen Elizabeth II.

Hartman said from where he is staying at Canada House he can see the queue, which is several kilometres long — thousands of people have lined up to pay their respects.

“It’s something you’ll never forget being an individual here. Regardless of preconceived opinions people might’ve had as an individual, it’s surreal. This is such an historic event,” Hartman said.

In addition to being Commander-in-Chief of Canada’s military, the queen was also Captain General, Colonel-in-Chief and Air Commodore-in-Chief of many Canadian units and branches.

In Calgary, Queen Elizabeth II was the Colonel-in-Chief of The Calgary Highlanders and The King’s Own Calgary Regiment.

She received regular reports from the regiments on activities.

“To be granted that honor with the reigning monarch is enormous,” Hartman said. “There is so much pride to say that in our little county regiment — the Glenn, as we are known — we have a Queen as our Colonel-in-Chief,” Hartman said.

Hartman knew what to expect when he was informed he’d be going to London — as a young lieutenant he had the privilege of being on parade for Her Majesty during one of her visits to Canada. He’s also served public duties on Parliament Hill, but says nothing can truly compare to this experience.

“We will be positioned just forward of Her Majesty’s coffin. It’s a huge honour. We will be marching there. But another significant piece, which is very very humbling is I will be in the Abbey during the actual service itself,” Hartman said.

“It’s a massive honour, something I will never forget,”

Hartman said it’s been a year of grieving for him, losing two strong women who have influenced his life.

“On a personal note, I lost my mother earlier this year. And I find it’s an odd segue but to me, Her Majesty — she’s the only monarch I’ve known. Growing up in public schools, Her Majesty was always on the wall. Definitely in the military as a serving officer, it’s huge,” Hartman said.

He said it’s been a sad occasion in London but also uplifting to see people celebrating Queen Elizabeth’s life.

According to a CAF spokesperson, four soldiers from each regiment will parade in this contingent, which is located at the start of the procession after the main contingent of George Cross recipients.

A colonel commandant or commanding officer from each regiment will also parade in a contingent located at the rear of the procession, closer to the coffin.

“In each of you, reflected in different ways, is the spirit of service we so admired in Her Majesty The Queen.” – #GGSimon

A historic delegation gathered to represent Canada at the commemorative events taking place in London in honour of Her Majesty. pic.twitter.com/UfcLfrhfKI

The units represented at the funeral include:

In Calgary, the Royal Canadian Legion #285 on Horton Road will be hosting a memorial tribute Monday at 11 a.m.

The Royal Canadian Legion Cochrane Branch will hold a remembrance ceremony for Queen Elizabeth II at 11 a.m. at the Cochrane Cenotaph.

The Royal Canadian Legion Strathmore Branch #10 will also have an official wreath laying that will take place at 11 a.m.