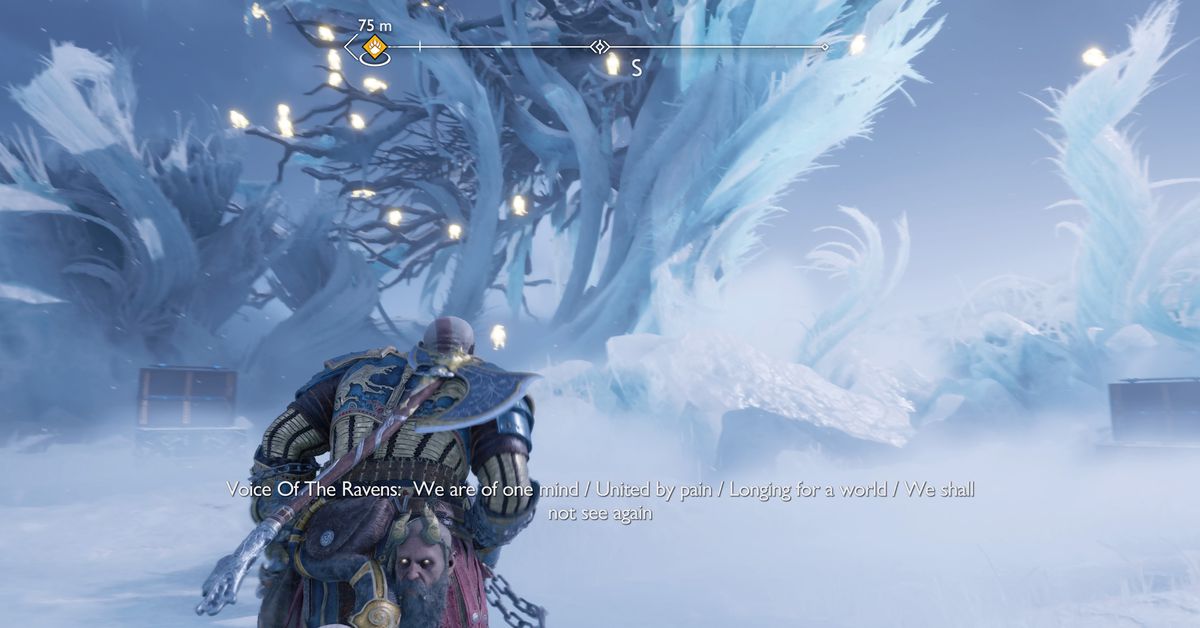 God of War Ragnarök re-introduces the obnoxious, chirping Odin’s Ravens from God of War (2018). There are 48 total Odin’s Ravens in Ragnarök, scattered throughout most of the game’s nine explorable realms.

Unlike the first game, however, you don’t collect Odin’s Ravens simply for the sake of collecting Odin’s Ravens. No, every vivid green bird you track down contributes toward an ongoing side-quest called “The Eyes of Odin.” In Niflheim, there are six chests that hold special items and can only be opened when you’ve killed a certain number of Odin’s Ravens.

In this guide, we’ll walk you through how to find all of Odin’s Ravens in God of War Ragnarök and complete “The Eyes of Odin” quest.

Note: This guide will show you all the Odin’s Ravens you can get during your first visits to Svartalfheim and Alfheim. As you might expect, you’ll be back to both of these locations later in the game and be able to access previously inaccessible areas with new equipment. If you reach the end of one of the sections in this guide and still notice you’re missing an Odin’s Raven or two, it means you simply can’t get it yet. We’ll update this guide to include information about the rest of the game’s Ravens by the time you can reach them.

If you played God of War (2018), you know that Odin’s Ravens are a big pain in the ass to take down. For giant, glowing birds, they can be a bit difficult to spot and hit. In God of War Ragnarök, you’re in for more of the same in this regard. However, we do have two quick tips to make it all a little easier.

Listen close for a raven’s caw

Odin’s Ravens seem to be a bit louder this time around, and are much easier to find with your ears than before. If you’re hunting for ravens (first, we recommend you consult our helpful images and descriptions below!) use your ears more than your eyes. The shrill chirp of the ravens usually means they’re somewhere where you can see them. Just be sure to look high and low, and follow the sound if you have surround sound.

Finding ravens is only half the battle in God of War Ragnarök; you actually have to hit the suckers. The Leviathan Axe is, by design, slow and heavy. This is great for chopping up baddies but not so great for sniping birds as they soar through the sky. If you’re having trouble hitting a bird who’s flying or far away, we have some advice: wait and remember.

We won’t spoil anything for you, but about halfway through the game you’ll unlock a tool that will make killing these ravens significantly easier if they’re either flying or are far away. Remember where the raven is (or bookmark this guide) and come back when you have that tool in hand.

Niflheim is home to a big white tree filled with ravens, which is where all of Odin’s Ravens go when you destroy them in the other realms. As you progress through the raven quest, you’ll be able to open more and more chests, each with their own goodies.

We’ve listed out the six chests below, how many ravens you’ll need to open them, and what rewards you’ll earn from each one.

Svartalfheim is the realm of the dwarves in God of War Ragnarök, and the first area you’ll encounter Odin’s Ravens. There are 13 total Ravens here, but you’ll only be able to access nine on your first visit to the realm.

The first Odin’s Raven in Svartalfheim is located in the Aurvangar Wetlands, almost immediately after you leave the Mystic Gateway.

When you leave the Gateway and enter the map, move left until you reach a small camp. While facing the camp, turn right and you’ll see the Odin’s Raven perched atop a volcanic rock. Take it out with your Leviathan Axe.

There is only one Raven in the dwarven city of Nidavellir, and it’s in the town square with the statue of Odin — meaning you’ll need to backtrack if you use the Nidavellir Mystic Gateway.

In the town square, to the left of Sindri’s shop, you’ll see Odin’s Raven perched on the house with the waterwheel on it, sitting comfortably above the blue awning.

The Watchtower — the dividing island in the Bay of Bounty — houses another one of Odin’s Ravens, which you can actually see on your boat ride over.

Make your way up to The Watchtower and walk behind it to the deck — the same location where the Draugr Hole is. From there, aim up and to the left, toward Nidavellir. Eventually, you’ll see the green Odin’s Raven fly into view. Take aim and kill it with your ax.

Just across the way from The Watchtower, on the same island, you’ll find Radsvinn’s Rig, home to another Odin’s Raven.

Make your way to the Nornir Chest in the area, which is to the left of the Mining Rig. Look up and to the left of the chest toward the hook being supported by the giant crane. The Odin’s Raven will be lounging on the hook ready for your ax to destroy it.

Another of the Bay of Bounty’s many Odin’s Ravens is sitting at the entrance of Althjof’s Rig.

When you park your boat at the third rig site, climb the chain and you’ll spot the Raven immediately — it’s sitting behind some cracked wood. Take out your ax and silence it.

Once you raise the Lyngbakr during “The Weight of Chains” side-quest, you’ll be able to access another of Odin’s Ravens.

Progress the side quest until you’re able to access the fire bombs (just after liberating the second fin). Open the gate to the left of the fire bombs and grab an explosive. Carry it through the gate and then take the path to the right. You’ll come across some golden rocks. Break them and then grapple over to the other side. To the right of the nearby Legendary Chest, you’ll find a hole. Crawl through it.

On the other side of the hole, look to your left. You’ll spot one of Odin’s Ravens chilling out on the Lyngbakr’s back, which really makes you wonder how long these things can hold their breath.

The Forge has two Odin’s Ravens, but you’ll only be able to reach one on your first visit. Ride the train up and then stop immediately.

As soon as you’ve entered The Forge, follow the path until the volcanic rock is on your left. Wait on this walkway until you see the familiar green hue of Odin’s Raven come swooping in. Take it out with your ax before moving along to the next area, as you won’t be able to come back here and get it until much later in the game.