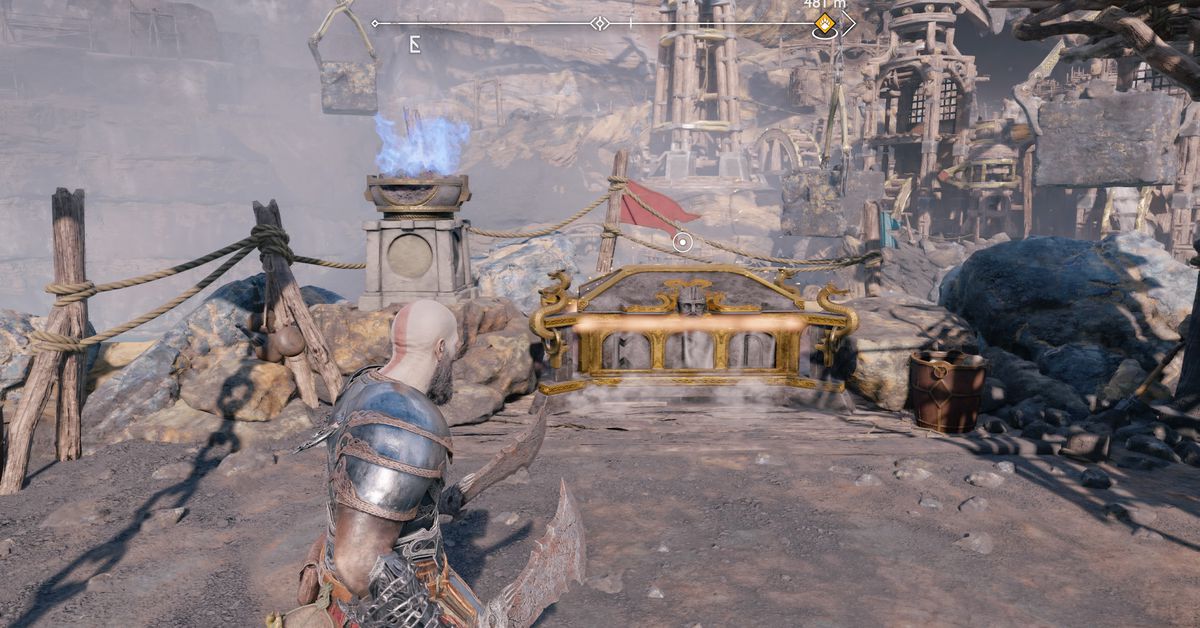 God of War Ragnarök brings back the tantalizing yet infuriating Nornir Chest puzzles, which will allow you to increase your health and Rage meters.

To unlock these chests, you’ll need to interact with three objects — be it a series of bells, totems, or braziers — in the chest’s relative vicinity. By solving the puzzle, you’ll be able to claim your treasure and improve Kratos’ chances of survival.

Nornir Chests can reward one of two items: Idunn Apples (which increase your health meter) or Horns of Blood Mead (which increase your rage meter). The game alternates which one it gives you based on the previous Nornir Chest you opened. So even if you get the Nornir Chests in a different order than we display below, you’ll never get two Idunn Apples back to back. Each time your meters go up, you’ll need more of the resource for the next upgrade. So the first time you’ll only need one of each, but then you’ll need two, three, and so on to upgrade your health and rage further.

In this guide, we’ll show you where to find every Nornir Chest in God of War Ragnarök and how to solve the associated puzzles, plus learn some general tips for solving Nornir Chest puzzles across the nine realms.

Note: This guide will show you all the Nornir Chests you can get during your first visits to Svartalfheim and Alfheim. As you might expect, you’ll be back to both of these locations later in the game and will be able to access previously inaccessible areas with new equipment. If you reach the end of one of the sections in this guide and still notice you’re missing a Nornir Chest or two, it means you simply can’t unlock it yet. We’ll update this guide to include information about the rest of the game’s Nornir Chests by the time you can reach them.

God of War Ragnarök features five different kinds of Nornir Chests. You’ll need to interact with three items in the environment for each, but the type of item varies with the different types of chests. Below we’ve listed out some tips for taking on these Nornir Chests based on their type.

The Totem Chests are by far the easiest in God of War Ragnarök. Once you find the Nornir Chest, all you need to do is look around for the nearby Totems. They are always relatively close by.

Our only real tip for these is to look behind objects like waterfalls and geysers (which you can freeze with your axe. Santa Monica Studio loves to hide these Totems behind things.

Switch Nornir Chests are the second easiest to deal with and just require a bit of memorization. Look at your Nornir Chest and remember the Rune symbols you see. You can also take a quick screenshot on the PS5 and pull it up via the screenshot tool as a super quick reference if you forget!

Armed with knowledge, look for the giant switches (which the game also tends to hide behind things). Spin them until you reach a rune you recognize, then move onto the next. If this doesn’t end up opening the chest, consider checking the runes again to make sure you didn’t mistake an N Rune for an n Rune or something like that.

Bell Nornir Chests are relatively straightforward and easy to find, namely because the bells are so damn big. However, they can definitely cause you some trouble if you don’t activate them in the right order. Each of the three Bells for each Nornir Chest rings for a different amount of time. So you almost always want to ring all three from the start, listen for how long the sound goes for each one, and then ring them in order from longest to shortest.

In this guide, we’ve tried to organize the Bells in the order we think you should hit them.

Brazier Nornir Chests are brand new to Ragnarök, and can only be activated by the Blades of Chaos. The idea here is that you use the Blades’ heavy ranged attack to set the torch aflame. There are two tricks to this kind of Nornir Chest.

First, be warned water will extinguish any lit braziers. There are certain puzzles where you’ll need to freeze water and keep it frozen in order to stop it from putting out your hard work. In puzzles like this, we mention the order we recommend you should light the braziers in.

The bigger pain in the ass with this type of Nornir Chest comes when you have to light braziers that are far away. Eventually you’ll gain access to hex arrows, which let you paint a sigil on a wall that you can then detonate with your Blades of Chaos. Unfortunately, the Blades are chained to your wrist and thus can’t extend very far. You’ll need to chain these hex sigils (you can place up to three) between a point you can hit with your Blades of Chaos and the Brazier, which can be pretty finicky.

Sigils glow and rotate quickly if they’re overlapping, which is a good way to tell if you’ve lined them up properly or not. You can also make hex sigils bigger by shooting multiple arrows at them — up to two extra times, drastically increasing the base size. However, by making the hex larger, you also destabilize the sigil a bit, causing them to automatically detonate after a bit. Bigger hex sigils are easier to deal with, but you need to be quick and efficient with them. Have a plan and full arrows before you fire.

If you’re really struggling with these, consider upgrading Atreus’ quiver to hold four arrows instead of three as early as possible.

Another new kind of Nornir Chest, these Totems regenerate too quickly for you to destroy all three — at least when you first start out. You’ll need a different kind of tool to interact with these Nornir Chests, which you won’t get until later in the game. (The game will tease you with these types of chests in early parts of Svartalfheim and Alfheim, however.)

We’ll update this section with a spoiler marker and more details before you’ll get far enough to need our help.

Svartalfheim is the first area where you’ll really be able to collect and explore things in God of War Ragnarök, and is therefore the first realm where you can increase your max health and rage with Nornir Chests. There are 10 in this realm, and you’ll be able to get six your first time through.

Use the Mystic Gateway to get to the Aurvangar Wetlands and grab the boat on the beach. Paddle until you reach the first area you can embark on, which will be on your right immediately preceding the water wheel.

When you get off on the island, freeze the geyser and jump over to the other side. Hang a right and jump a small gap to reach a small landing with a Nornir Chest on it.

For the first Totem, walk backward away from the Nornir Chest and back toward the geyser you just jumped over. Freeze the geyser next to the one you previously froze (on your left, if you’re facing the river) and you’ll reveal a grapple point in the cliff. Climb up and turn to your left. Sitting next to a large tree, you’ll see the first totem. Break it with your ax.

With the first totem broken, return to the Nornir Chest and face it. On your right, on the nearby cliff, you’ll see the second totem. Break it.

Progress along the Aurvangar Wetlands river until you reach the bend that takes you right toward Nidavellir. Instead of going to the dwarven city, look for a little cave in the rock and row your boat into it. Park your boat when you reach the beach.

Walk forward until you reach the destroyed dwarven structure. You’ll see the Nornir Chest sitting directly in front of it. The symbols for this one are: right flag, B, and N.

For the right flag switch, look to your right from the Nornir Chest and walk toward the giant cog buried in the ground. Freeze the geyser and you’ll see the switch. Recall your Leviathan Axe and throw it through the geyser to hit the switch. Freeze the water again to check on the rune. Repeat this process until the switch shows the little right flag rune seen above.

Turn left from the cog and the first switch. You’ll come across a large pit — which you likely cleared of enemies when you first landed here — but don’t jump down. Instead, look at the cliff on your left and you’ll see another switch. Hit it until you see the B rune.

Return to the Nornir Chest and take the path to the far left, grappling up the side of the rock. Walk forward and turn around to face the largest part of the volcanic rock formation. You’ll see a switch sitting up there, clear as day. Hit it until you get the N rune.

When you first leave Nidavellir via boat, take a right and land at the first location you can. This is Dragon Beach, named for the dope dragon statue and the massive dragon skeleton nearby.

Clear the area of enemies and then walk under the bridge. Here you’ll find another totem Nornir chest.

To break the first totem, turn around and head toward the water, staying between the two landing zones. You’ll see a geyser sitting behind a crane. Freeze the geyser with your ax to spot the totem. (Or just take our word for it and chuck your ax blindly through the water. You won’t get in trouble.)

The second totem can be a little tough to see. If you turn right from the Nornir Chest and freeze the geyser near the dragon statue, you’ll see the totem behind a metal grate, but you won’t be able to break it. Walk around the opposite side of the statue until you can see its tail. To the right of the tail you should see the totem poking out of the grass. Use your ax to destroy it.