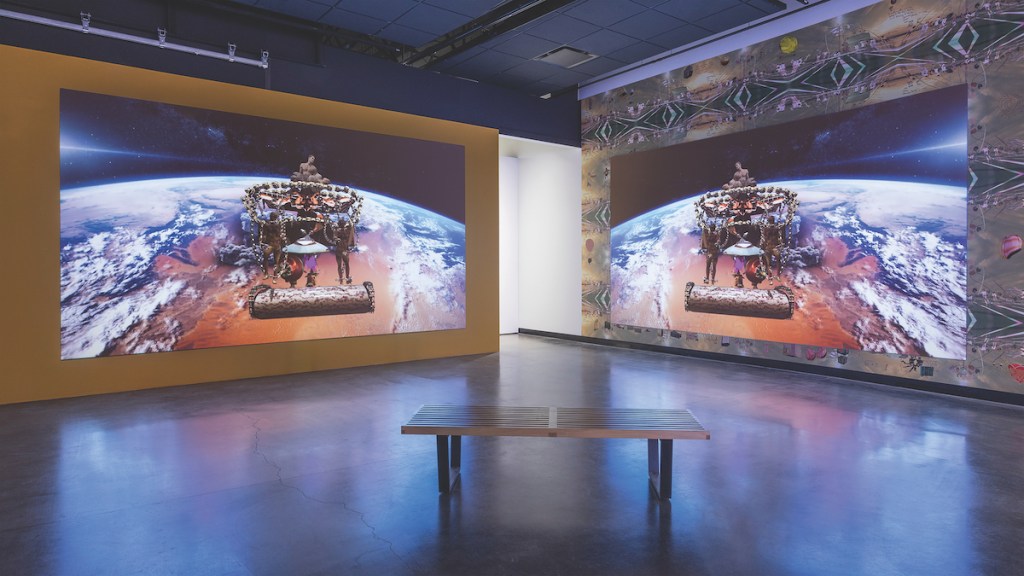 Lately, I can’t stop thinking about an argument Maggie Nelson made in her most recent book, On Freedom (2021). She writes that, while 20th-century artists focused on exposing viewers to the horrors of the world, many artists in this century have turned their efforts toward the necessary work of healing and repair. The second edition of Cleveland’s FRONT Triennial, whose theme is healing, seems to take Nelson’s claim to the extreme.

Titled “Oh, Gods of Dust and Rainbows,” the exhibition, organized by Art21 chief curator Tina Kukielski and artist-designer Prem Krishnamurthy, sprawls across Cleveland and the nearby cities of Akron and Oberlin—a region whose primary industry, the exhibition brochure claims, is healing, referring to local organizations like Cleveland Clinic and Alcoholics Anonymous (founded in Akron). The show largely avoids mentioning the sources of our trauma, or including work that scrutinizes what critics call the Wellness Industrial Complex; instead, it engages organizations like Cleveland Clinic as community partners and sources of funding.

The show seems to argue that making and viewing art is good for the soul, so long as the work doesn’t probe too deeply. In Oberlin, FRONT welcomes viewers to the studio of the late painter Audra Skuodas. A child refugee from Lithuania after WWII, Skuodas for decades made striking spiritual paintings of spindly figures against pastel patterns. Explaining their decision to show her workspace as well as her paintings at the Akron Art Museum, the curators said they wanted to highlight how the process of painting helped Skuodas grapple with the trauma of war and displacement. Here and elsewhere, they chose works that respond to troubles that are kept outside the frame.

I’ve been frustrated with art that tries to make viewers aware that the world is deeply troubled and in danger of ending, since these facts are so obvious, and I sure wouldn’t mind being healed. So although my first impression of the triennial was that it was pretty twee, replete with a rainbow logo—referencing the Langston Hughes line that titles the show—I kept an open mind. As I looked around, I kept asking myself if I felt healed, and at one point, I think I did, a little bit. It was in Jace Clayton’s installation 40 Part Part (2022), comprising algorithmically remixed songs that play in 40-channel surround sound. When I visited, someone had plugged their phone into the interactive setup and started playing Adele, who belted out her plea “go easy on me,” which the computer punctuated with pregnant pauses. Her guttural catharsis overwhelmed the Cleveland library’s sterile silence, and heck, I felt it. For art to “heal,” perhaps it needs to be a little bit cheesy. It’s both embarrassing and freeing to be reminded that your intimate feelings follow some kind of script that can be turned into a pop song.

Another highlight also alluded to the cathartic potential of pop music: Wong Kit Yi’s commissioned video essay Inner Voice Transplant (2022), which unfolds via subtitles that light up from left to right like karaoke cues. On select opening days, the artist was present to read them herself. She weaves together stories about healing that take place in Cleveland and China. One involves the first successful voice box transplant, which was performed in 1998 at Cleveland Clinic, where the work is installed; another concerns her mother’s diagnosis of pulmonary fibrosis, for which there is no cure. As with most works in the triennial, the tone is playful, but Wong’s contribution stands out for explicitly questioning whether healing is always a possible or appropriate goal. “I feel like the word ‘healing,’” she says in the video performance, “is beginning to seem like a generic over-the-counter medication that can be thrown at any problem. And perhaps it can cause additional problems.” This made only more conspicuous the omission of work by contemporary disability-justice-aligned artists who have consistently been making that very point.

The show featured work about healing, work that was healing for artists and communities to make, and work that tried to heal its viewers. So I kept wondering if, or how exactly, I am broken, and how much my type of damage and need for recovery resembled another visitor’s. “Oh, Gods of Dust and Rainbows” was conceived before the pandemic, but still began in an era when many of the world’s evils hardly need to be named. And indeed, few artists named them. Sometimes, I wondered whom this silence benefited, or who did the silencing. For Dawn, a new work commissioned in 2021 by Cleveland Clinic, Jacolby Satterwhite asked residents of the nearby, primarily Black neighborhood of Fairfax to draw whatever they consider “utopia.” He then digitized and stylized their drawings, turning them into a mural outside the clinic’s biorepository. One sketch depicts a cube with a letter or two on each face, spelling SOBRIETY; another shows a vase of tulips. For a related installation on view at the Cleveland Institute of Art, Satterwhite animated these images, creating digital spaces one can navigate using an X-Box controller—a small step toward bringing residents’ utopias to life. We can guess why the glossy, growing medical research campus wanted to enlist an artist to help repair its community relations, and why the Western biomedical industry felt the need to reach out to a community whose trust they’ve lost. But the gesture seemed to place the artist in the awkward position of “healer.” Ideally, healing looks less like avoiding difficult conversations and more like finding ways to have them peacefully and constructively, without evading accountability.

The strongest curatorial argument about art and healing emerged in an exhibition on craft curated by Murtaza Vali at the Akron Art Museum. The overarching premise that repetitive art processes are therapeutic seemed a little obvious, and recalled the framing of Skuodas’s studio, but a compelling subsection included work in which artists repurposed detritus, salvaging something from the trash filling up our planet—or at least modeling the principle of grappling with the waste rather than shipping it off somewhere else. In readymades that often borrow car parts, Michigan-born artist Dominic Palarchio repurposes defunct found objects, often eliding distinctions between craft and repair or handiwork. His resulting, oddly elegant untitled sculptures—like a Brita water filter balanced on an oxidized copper pipe—recall the water crisis in Flint while offering space to mourn environmental racism.

This year’s slew of pent-up and postponed -ennials—emerging wearily and worriedly into the world after years of rumination—seem divided into two camps: those privileging politics in the form of heavy-handed didacticism (Berlin) or social practice (Documenta), and those that express a kind of exhaustion with naming all that ails us (New Museum, FRONT) or that beg art to be more beautiful than political (Venice). This dichotomy is disappointingly simple; exhibitions can be positive, repair-oriented, and even breathtakingly gorgeous without dancing around critical issues.