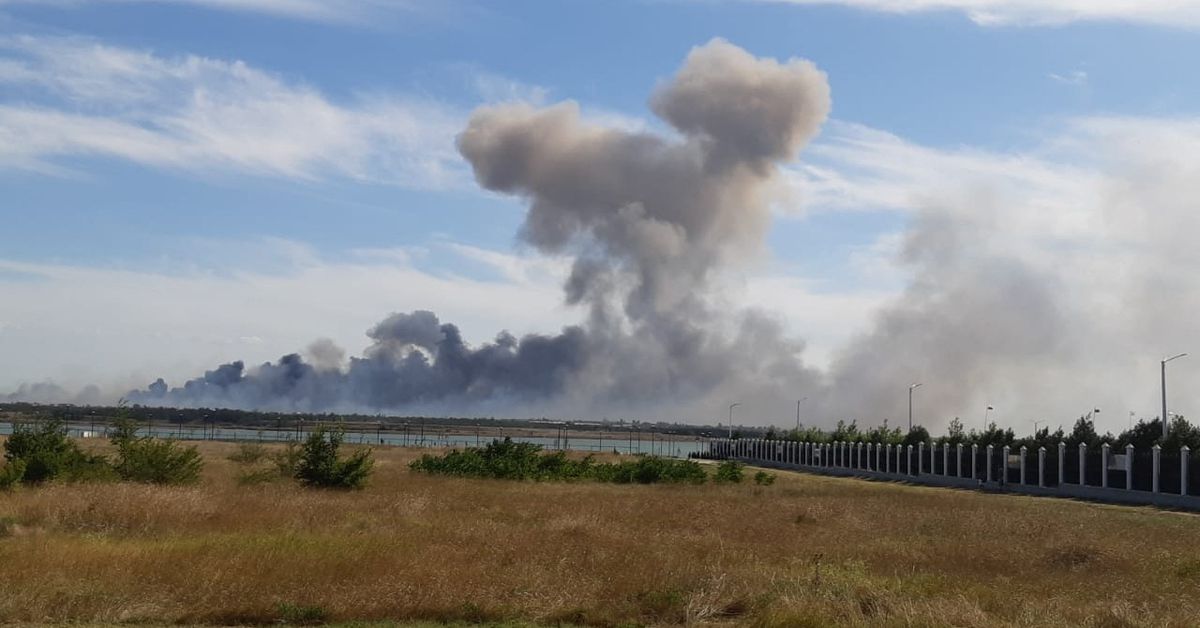 MOSCOW, Aug 9 (Reuters) – Blasts rocked a Russian air base near seaside resorts in the annexed Crimean peninsula on Thursday, injuring five people according to local authorities in what Moscow attributed to detonations in ammunition stories.

Local witnesses told Reuters they heard at least 12 explosions around 3:20 p.m. local time (1220 GMT) from the Saky air base near Novofedorivka on Crimea’s western coast. They described a final blast around 30 minutes later as the loudest.

Crimea has so far been spared the intense bombardment and artillery combat that have taken place in other areas of eastern and southern Ukraine since Feb. 24, when President Vladimir Putin ordered Russian armed forces into Ukraine – including some based in the peninsula.

Russia’s defence ministry said the “detonation of several aviation ammunition stores” had caused an explosion, Russian news agencies reported, but that there had been no injuries.

However, the head of Crimea’s health department said five people had been injured, including one child, according to the state-run news agency TASS.

The Russian governor of Crimea, Sergei Aksyonov, posted a video on his Telegram channel from close to the base.

“Ambulance crews are working on site … it is too early to talk about victims,” he said. “Among the civilian population, nobody has been admitted to hospital for medical treatment.”

He said a five-kilometre (three-mile) exclusion zone had been established around the site, and that local authorities were monitoring fires.

The defence ministry said there had not been any kind of attack and that no aviation equipment had been damaged. Moscow said further measures were being taken to establish the causes.

The base is close to the seaside resorts of Novofedorivka and Saky, but the Russian tourism association ATOS said they did not appear to have been affected by the blasts. Nevertheless, locals reported congestion on roads leading away from the coast.

Numerous videos taken from beaches were posted on social media, showing huge plumes of smoke rising into the sky in the distance. The videos could not immediately be verified.

Novofedorivka and Saky are around 50 km (30 miles) north of the port of Sevastopol, home of Russia’s Black Sea Fleet, which Moscow leased from Kyiv for decades before seizing and annexing the entire peninsula from Ukraine in 2014, in a move not recognised by most other countries.

Reporting by Reuters; Editing by Kevin Liffey and Andrew Cawthorne