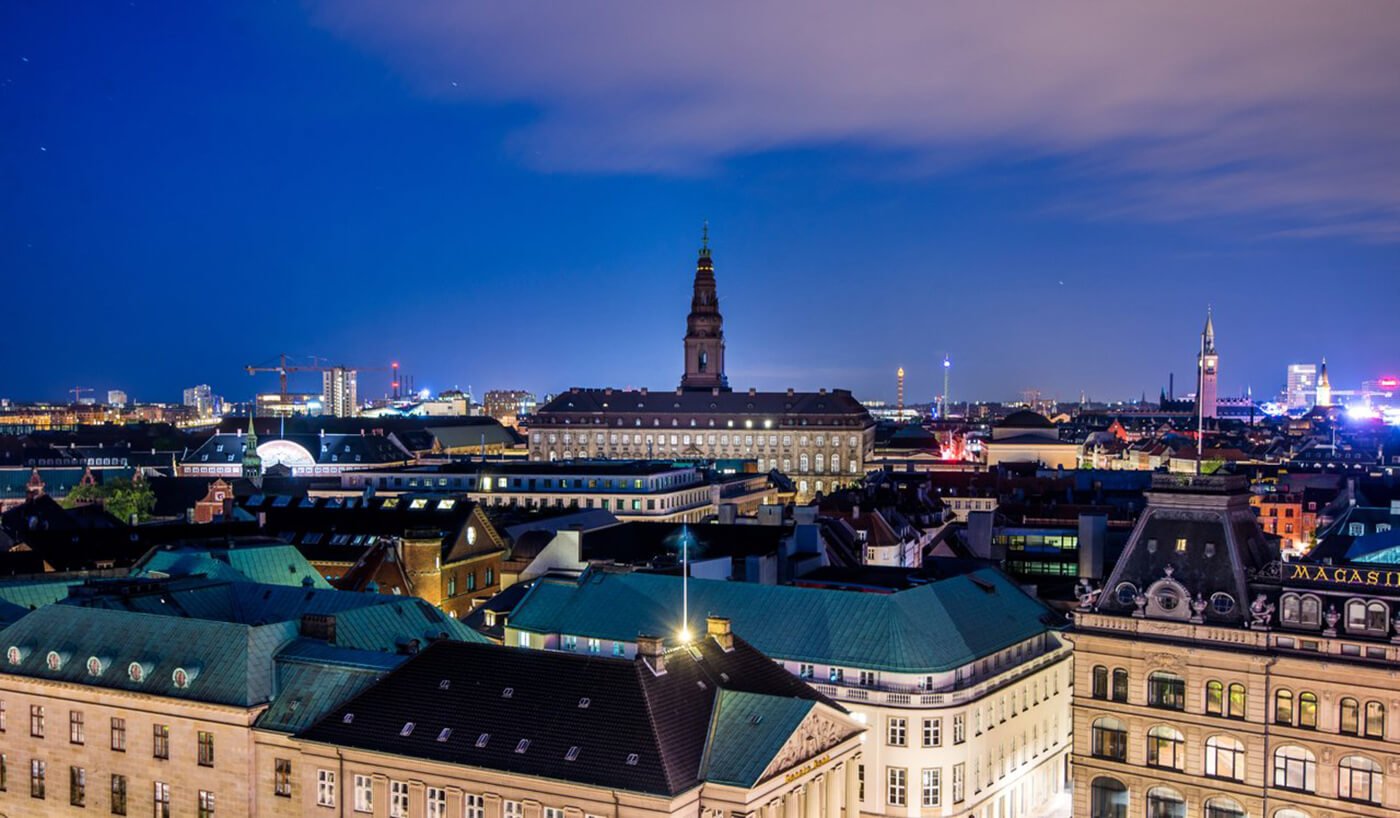 Why go to all the trouble? By which I mean a Mediterranean summer holiday with spiralling temperatures, lengthy traffic jams and overcrowded flights for the holiday that never really stands a chance.

Instead, for sheer comfort and ease, for rest and repose, for good vibes and bonhomie, I strongly recommend Denmark. How easy a country to get around and holiday to manage. And what inspires people. Indeed when I travel I like to develop a mosaic of the generic looks that typify a nation. In Denmark, all appear to sport a grin and shun a grimace. Indeed it’s often dubbed the “world’s happiest country”. As their renowned philosopher, Søren Kierkegaard declared, “life is understood backwards but must be lived forwards”).

Close to both the airport (15 minutes away by taxi) and metro station and within walking distance from the Opera, the Royal Library and Nyhavn is NH Collection Copenhagen. I went up the elevator into a foyer that was contemporary and chic. It houses a stylish super-long hub with a dimly-lit expanse where arched sculpture and irregular levels fought for my attention in an open-planned set of flowing concepts. It ranges from the breakfast restaurant to the library, with comfortable seats, natural shapes and organic artefacts. It’s all very tastefully done.

The four hundred or so rooms have a modern Scandinavian design and, most refreshingly, an unusually generous and pampering amount of space. The window takes up the whole wall and, beyond the suede-style curtains, it offers a wonderful natural light to afford panoramic views over the harbour and canal.

And beautifully positioned opposite Nyhavn, the 17th-century waterfront lined with brightly coloured townhouses is Kompasset Restaurant. This former flag and compass factory has an interior with celadon banquettes that has taste, simplicity and a super cosy feeling. All in keeping with their word ‘hygge’ meaning a quality of cosiness and conviviality that engenders a feeling of contentment and which is the epitome of Danish culture. Here I enjoyed the varied array of mussels, potatoes, dill, summer cauliflower, egg, browned butter, hazelnut, langoustine, duck heart, leek and buttermilk, turbot, peas, chives, strawberries, hibiscus, long pepper and meringue.

Here too I discovered the drinking toast across Scandinavia is “skål”! (pronounced “skoal”) which originally meant ‘skull’ and referred to a custom practised by the warlike Vikings who used the dried-out skulls of their enemies as drinking mugs.

Formerly Denmark’s first public hospital, housed in a magnificent 18th-century Rococo building, is The Design Museum. It has decorative art and a heritage collection in one half and its modern-day and cutting-edge design in the other. I found it truly a font of inspiration.

Tucked away along a trendy shopping street in the city centre off Strogen I came to 42 Raw Vegan. Sitting on a café-style bench amongst racks of fashion magazines, I savoured the cosmopolitan vibe of happy adherents to the restaurant’s slogan of “just as nature intended”. Here I tucked into a delicious chicken bowl comprising cucumber, cabbage, edamame, hummus, avocado and chicken.

Food has an equally inventive vocabulary in the Danish dictionary I rifled through. For the names of traditional Danish pastry (‘wienerbrød’) there’s ‘kanelsnegle’ (cinnamon snail), ‘spandauer’ (baker’s bad eye after the yellow cream in the middle) and ‘frøsnapper’ (frog snapper). As for a longer word I found the intriguing ‘palaegschokolade’ for chocolate in thin slices for sandwiches.

Set conveniently right by Central Station and on Tivoli Gardens’ western side is Nimb Brasserie. Nimb resembles Brighton Pavilion but with an Indian twist and this imposing hotel overlooks striking fountains spraying bubbles and jets of water and has an outdoor brasserie that proved a peaceful sanctuary for me from all the surrounding buzz. Here I tucked into a delicious Salad Nicoise a la Nimb with white tuna from the Bay of Biscay, eggs and potatoes.

And so seamlessly on by train to the sound and the strait, the area north of the capital that is North Zealand. It overlooks the famous Øresund Strait and is protected over the Baltic at Helsingør by Kronborg Castle which provided the setting for Shakespeare’s ‘Hamlet’ known to us as Elsinore.

Café Olai is the oldest family restaurant in town with tasteful wooden tables and low ceilings amongst the freshest of roses and the most stylish of lighting on long cords so typically Danish in design. It is full of Swedish trippers who come in their droves to sit in the sage green chairs and enjoy abundant helpings especially of ‘smørrebrød’ the traditional Danish open rye-bread sandwiches. Here I too enjoyed a chicken salad comprising of crispy salad with warm chicken breast, fried bacon, cucumbers, cherry tomatoes, pickled red onions, homemade dressing, grilled pineapple and Jerusalem artichoke chips.

North Zealand is nicknamed the Danish Côte d’Azur but has none of their flashiness, as the Danes come for their summer holidays. With more bikes and boats than buckets and spades, there’s a joyful sense of entire generations of families collected around pontoons with diving boards and amongst the boats, the picnic tables and the villas with their private beaches and their views across to Sweden.

I stayed at Hotel Villa Brinkly. It’s a hidden gem sandwiched between the sea and a forest. Indeed the Egebæksvang Forest is perfect for a proper stroll or “forest bathing”, the simple and modern method of being calm and quiet amongst the trees and the beach on the Øresund strait offers an uplifting vista across Sweden. The hotel is set on Strandvejen, the forty-kilometre beach road, which winds along the coast from Copenhagen to beyond Elsinore. It’s in the village of Skotterup, “the old Snekkersten” as the estate agents have it and is full of former fishermen’s cottages that are now summer residences. I couldn’t recommend it more highly as a means to experience the true authentic Denmark: a quaint 19th-century, low-rise wooden boutique hotel with a homely style and even a magnificent personal chef.

This chalet-cum-beach house with its distinctive navy-blue colour has eight cabin-style rooms and one family suite with panelled ceilings and pine walls, naval artefacts and each possesses its own outdoor terrace and furnished patio. There are views of the waterfront and sea in front of the forest with its gorgeous avenue of trees behind. In the foreground is the yard where the owners grow their own herbs and vegetables and tend to their pair of Guinea pigs. All very heavenly, homely and grounding.

In the charming dining room with a chandelier and tasteful French furniture, the magic happens as it’s where Annette serves dinner. She’s a gourmet chef who also caters for Denmark’s film premiers such as Indiana Jones, Avatar and Pirates of the Caribbean. She focuses keenly on local produce and her food is outstanding. Each dish is light and spoiling and like a present of healthy offerings, I went on a journey of tastes and sensations like the very best of taster menus. She is personally on hand to talk you through her ‘gifts’. It has to be experienced. As does her husband Erik who offers his time and very British sense of humour to all and sundry. The peaceful setting is open to the animation of the guests and of course the hosts and it’s equally perfect for a solo traveller. Non-guests need to book the restaurant in advance. It’s a sensory delight.

I went on a shortish bike ride down to Humlebæk to the Louisiana Art Gallery. It attracts connoisseurs from all over the world and, along with the new Munch museum in Oslo, is Scandinavia’s premier modern art gallery with an endless cavern of halls sufficient to house four extensive exhibitions at any given time alongside its permanent collection.

Almost like a museum in itself, and as another part of my full day out, I ate across the road at Gamle Humlebaek Kro. It’s like an alpine chalet and houses four themed rooms such as the ‘Hunting’ room with walls bedecked with antlers, the ‘Captain’s’ room with nautical compasses, charts and paintings, the ‘King’s’ room with heritage and family memorabilia and the ‘Gallery’ with large, dark, wooden seats. It’s all very grounding steeped, as it is, in antiques and history.

Everywhere the Danish are committed to recycling and passionate about the environment; for being eco-friendly is seen as a basic duty and something you do to be a part of Danish society. Indeed Noma, the famous restaurant meaning ‘mad Nordic food’, uses fresh and wild natural ingredients that are often foraged.

Open from March to October, which encompasses the full Danish holiday season, is Café Vitus. Set in a modest hut overlooking Snekkersten harbour, it’s full of the local community with their dogs and prams, their bicycles and boats. There’s nothing quite like a marina to eat beside and watch as fellow diners moor, eat and sail off again. Here I enjoyed the freshest shrimp and avocado salad before a deliciously naughty treat of hot chocolate with cream. A hidden gem.

So much better than the Mediterranean!

Like much of Scandinavia it is expensive to the British purse but the Danish are not accustomed to tipping waiters or taxi drivers who are obliged to have a bike rack to take you home if you have had two too many glasses of wine.

To understand more fully the Danish way of life I strongly recommend ‘How to be Danish’ by Patrick Kingsley and “The Year of Living Dangerously” by Helen Russell and for specific guidebooks ‘DK Eyewitness Denmark’ and ‘The Monocle Travel Guide Copenhagen’.

Adam had support from www.gatwickexpress.com and www.holidayextras.co.uk (0800 316 5678) which offer airport lounges at all major UK airports and many international destinations). He was covered by online travel insurance specialist, CoverForYou (0207 183 0885)