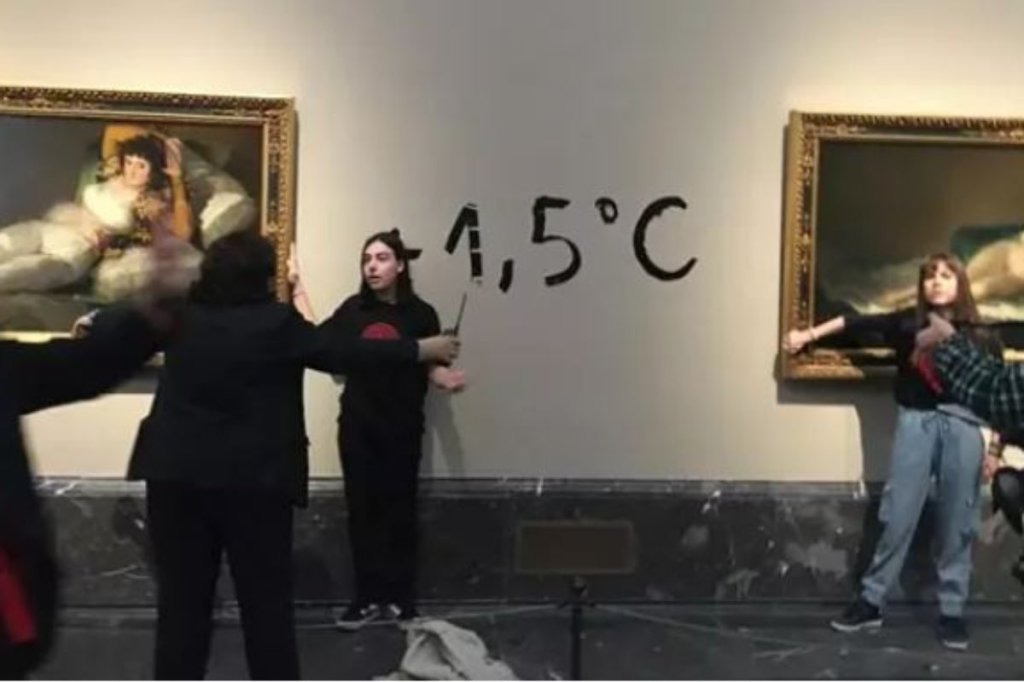 Protestors from Spanish environmental activist group Futuro Vegetal apparently glued themselves on Saturday to Francisco Goya’s painting The Clothed Maja (circa 1800), which hangs in Madrid’s Prado Museum, and wrote “1.5 C” on the wall next to the painting.

“Last week, the UN recognized the impossibility of staying below the Paris Agreement’s goal of staying below a 1.5 celsius degree change,” an account for Futuro Vegetal wrote on a Twitter post attached to a video of their action at the Prado.

The UN report referenced by the activist group found that the Earth is on its way to temperature increase between 2.4 celsius and 2.6 celsius by the end of this century.

“We had our chance to make incremental changes, but that time is over,” Inger Andersen, executive director of the United Nations Environment Programme, wrote in an article on the report’s findings. “Only a root-and-branch transformation of our economies and societies can save us from accelerating climate disaster.”

Meanwhile, the Prado put out their own statement on Twitter.

“We condemn the act of protest that has taken place in the museum. The works have not been damaged, though the frames are slightly damaged. We are working to get back to normal as soon as possible,” the post reads. “We reject endangering cultural heritage as a means of protest.”

Environmental activists first began gluing themselves and throwing liquids at art works in museums this past June, however none of the targeted works have sustained damage. The protests began in the UK, led by the organization Just Stop Oil. Since, groups and individuals around Europe have staged actions in museums like the Museum Barberini in Potsdam, the Vatican Museum in Rome, and the Mauritshuis Museum in The Hague.