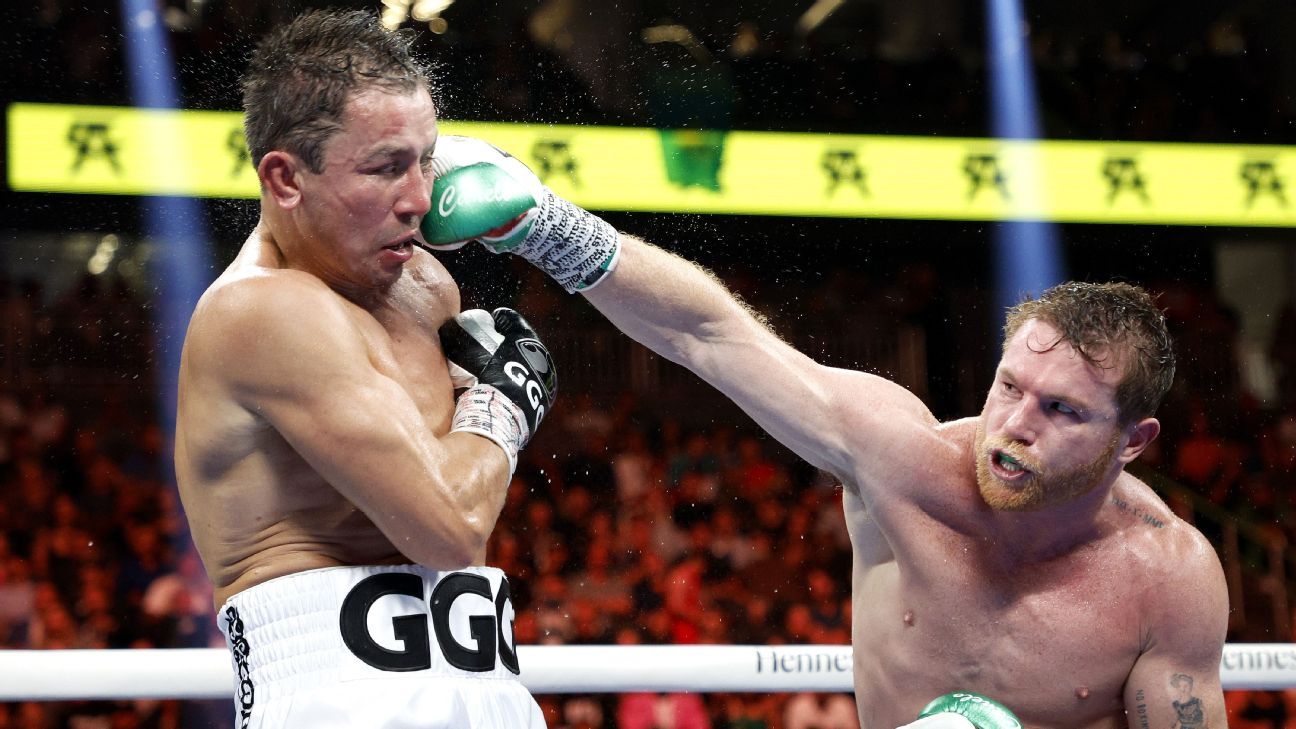 LAS VEGAS — After the final bell and 36 rounds together, Canelo Alvarez and Gennadiy Golovkin shared a long embrace, apparently ending a feud that grew personal over the five years since they first met in the ring.

In yet another close fight, Alvarez retained his undisputed super middleweight championship on Saturday at T-Mobile Arena with a unanimous decision victory over his longtime rival in a trilogy bout before a raucous pro-Canelo crowd on Mexican Independence Day Weekend.

Alvarez (58-2-2, 39 KOs) started strong while Golovkin worked his jab and barely threw his powerful right hand, the punch that launched him to stardom and a legendary middleweight championship run. Finally, down the stretch, Golovkin found his footing and won four of the final five rounds on two scorecards, but it was too little, too late.

While they hugged, Alvarez told Golovkin, “Thank you so much, my friend. Thank you for everything. We give the fans three good fights.”

The pleasantries were in stark contrast to the prefight buildup, when Alvarez vowed to end Golovkin’s career with a knockout victory. He even called Golovkin (42-2-1, 37 KOs) a phony who pretends to be a nice person.

Now, with the dust settled and the rivalry concluded, the fighters head in separate directions.

Alvarez, who owns all four 168-pound belts, could pursue a rematch with Dmitry Bivol next year to even the score from May, when Bivol routed him via decision. But first, Alvarez said his left hand requires surgery, though he didn’t offer specific details of the injury.

Alvarez, boxing’s top star, told ESPN at ringside that his hand is “f—ed up from the Caleb Plant fight,” a November TKO victory that preceded the loss to Bivol.

That’s exactly what Alvarez displayed in the aftermath of a second victory over Golovkin, a third meeting that Golovkin and boxing fans eagerly waited four years to materialize. The September 2018 rematch, which Alvarez won via majority decision, was far from convincing, a battle that begged for an encore. The first bout, in September 2017, was a controversial draw Golovkin was adamant he won.

Those two bouts were contested at 160 pounds, where Golovkin remains a unified champion.

Since he captured Olympic silver in 2004, he has competed at 160 pounds in title fights.

“Everybody knows, this is high-level class. This is the best fighter in boxing. Everyone knows who is Canelo. It’s a huge fight. Look at his face, look at my face. We trained well, and this shows that we did a very good-quality fight.

“This fight is more tactical. Today, Canelo is better. Congrats to Canelo.”

Indeed, this fight was a far cry from the memorable first two entries in their storied rivalry, save for the final four rounds, when the action picked up exponentially.

Golovkin, a native of Kazakhstan who fights out of Los Angeles, was down wide on all three cards entering the stretch and picked up the pace. He began to fire the right hand that made him a future Hall of Famer and connected on some thudding shots in Round 9 after he pinned Alvarez in the corner.

Round 10 was more of the same, with a bundle of sharp right uppercuts on the inside set up by Golovkin’s excellent jab. In Round 11, he busted Alvarez open over the right eye and finished strong in the final round.

“Second half, I feel not bad,” Golovkin said. “This fight is so smart. More tactical, like chess.”

The fight wasn’t very good over the first seven rounds, though. Golovkin pumped his jab but never followed up with a right hand. Alvarez, meanwhile, controlled the action and pushed Golovkin back with loads of pressure.

He attacked Golovkin’s body with blunt right hands to the liver, and a left hook to the face came behind it. By the end of Round 3, Golovkin’s face was already swollen, and a large welt emerged on his forehead.

Canelo continued to pound Golovkin’s midsection with right hands as the fight wore on, and in Round 5, he connected on perhaps the biggest punch of the fight, an overhand right that snapped the challenger’s head back.

Still, Golovkin was never in any danger. After all, he possesses one of the best chins in boxing, and time hasn’t appeared to erode it.

But the passage of time has, at long last, concluded what was once a bitter rivalry. Alvarez, ESPN’s No. 5 pound-for-pound boxer, will seek to reclaim the top spot he owned before the upset defeat to Bivol after some well-deserved rest.

Golovkin is near the end, but insists he’ll press on with his career. After his late stand against Alvarez on Saturday, there will be much interest in his future bouts, whether they’re contested at 160 pounds or 168.

Whatever transpires for each man, their time together in the ring is over, and with it, one of the greatest — and most bankable — rivalries in boxing history.

“I’m just glad to share the ring with him,” Alvarez said. “We’ve given the fans three really good fights. I’m glad to be involved in that kind of fights.”