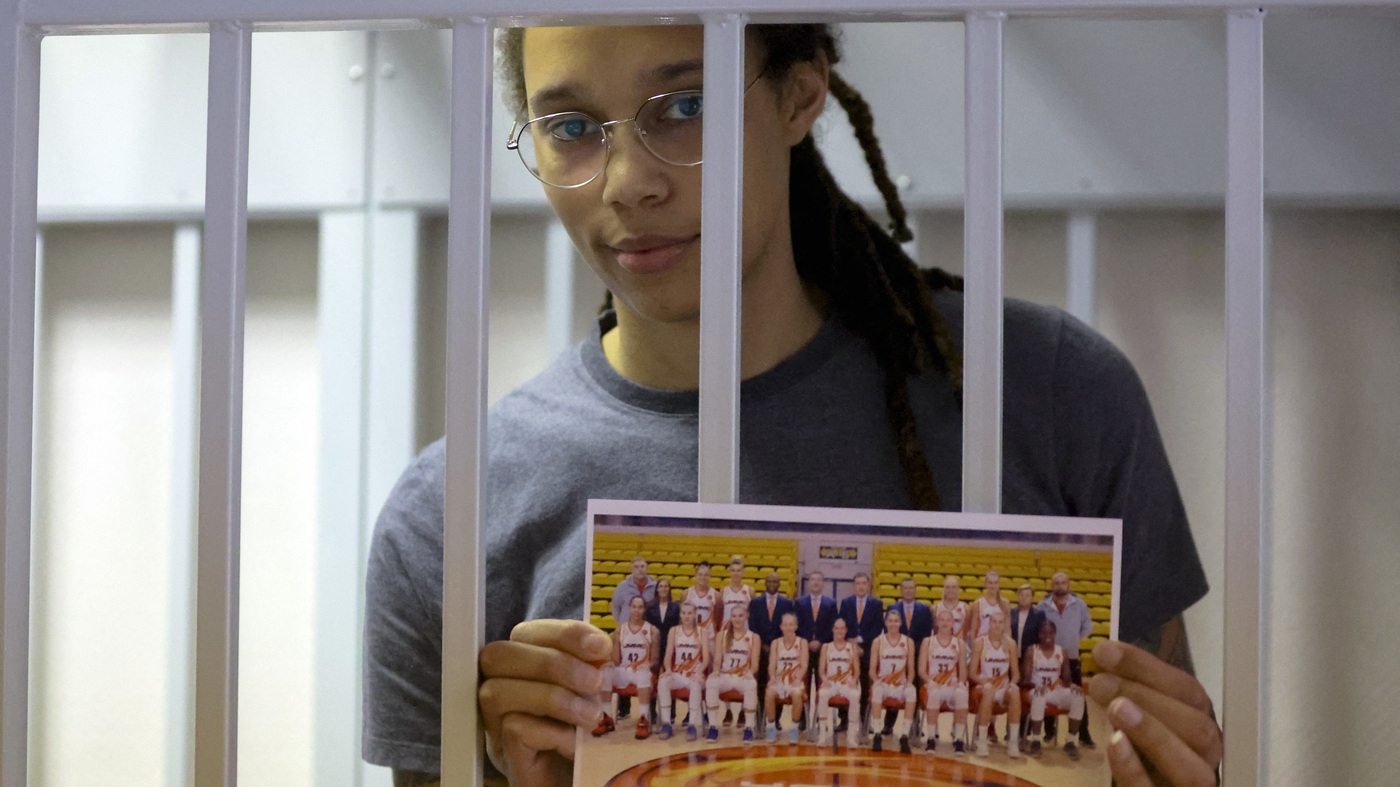 Brittney Griner holds a picture of her Russian basketball team as she stands inside a defendants’ cage before a court hearing in Khimki, outside Moscow, on Thursday.

Brittney Griner holds a picture of her Russian basketball team as she stands inside a defendants’ cage before a court hearing in Khimki, outside Moscow, on Thursday.

MOSCOW — A Russian court has found Brittney Griner guilty on drug smuggling and possession charges. The widely expected verdict comes after a monthlong trial and nearly six months after the basketball star was arrested at a Russian airport with cannabis in her luggage.

The court did not immediately issue a sentence. Griner could face up to 10 years in prison, though the Biden administration — under public pressure to secure her release — has tried to negotiate with Russia to free her as well as another jailed American, Paul Whelan.

Earlier on Thursday, as the two sides delivered closing remarks, the prosecution had requested a sentence of 9 years and 6 months in a prison colony. Griner’s defense attorney called for her to be acquitted, or for the court to show leniency in any punishment she’s given. The basketball star also spoke on her own behalf.

“I made an honest mistake and I hope that in your ruling that it doesn’t end my life here,” Griner said.

Griner, 31, has now been detained for 24 weeks, after authorities at Sheremetyevo International Airport outside Moscow found cannabis vape cartridges in her luggage.

The Olympian and NBA champion says she must have put the cannabis in her bag by mistake. Her defense team notes that Griner has a medical marijuana card in Arizona to help her cope with injuries sustained over years of competition. But personal cannabis possession is illegal under any circumstances in Russia, similar to U.S. federal law.

In their closing arguments, Griner’s defense attorneys cited Griner’s contributions to the growth of Russian women’s basketball and detailed irregularities in her arrest and detention — including a lack of access to qualified translators — in arguing for Griner’s acquittal or at least a lenient sentence.

Her lawyers also noted that the basketball star was prescribed medical marijuana by a U.S. doctor to treat chronic pain in the offseason — and still had never failed a drug test.

“What does this show?” said defense counsel Maria Blagovolina. “It shows that Brittney Griner used marijuana only at home and only in very small doses and that she had no intention to bring the substance into Russia.”

In her final statement to the judge, Griner reiterated that she never intended to break any laws or hurt anyone.

She apologized to her Russian teammates for any damage she may have caused, adding that “this is my second home and all I wanted to do was win champsionships and make them proud.”

The court’s judgment is only one factor deciding Griner’s fate. She’s also at the center of a potential prisoner swap that could see the U.S. release notorious Russian arms dealer Viktor Bout. But Russian officials have said any such deal would have to wait until after Griner’s trial is over.

Griner was arrested in February, one week before Russian President Vladimir Putin invaded Ukraine. Her detention quickly led to speculation that Putin’s government wants to use her as leverage against the U.S. Griner alluded to that in her closing remarks to the judge on Thursday.

“I know everybody keeps talking about political pawn and politics, but I hope that is far from this courtroom,” she said.

Griner is a star center for the Phoenix Mercury. But like many WNBA players, she plays in overseas leagues during the U.S. league’s offseason, earning far more than her WNBA salary. In recent years, she has played for UMMC Ekaterinburg, a Russian team owned by oligarch Iskander Makhmudov. The team has had longstanding ties to Griner’s U.S. club.

Griner was returning to her Russian team from the U.S. when she was detained.

The effort to free Griner has grown from her fans and fellow basketball players to include a much broader circle. This summer, dozens of rights groups, including the Human Rights Campaign, the National Organization for Women and National LGBTQ Task Force wrote a letter to President Biden urging him to treat her case with urgency.

This is a developing story. Check back here for updates.