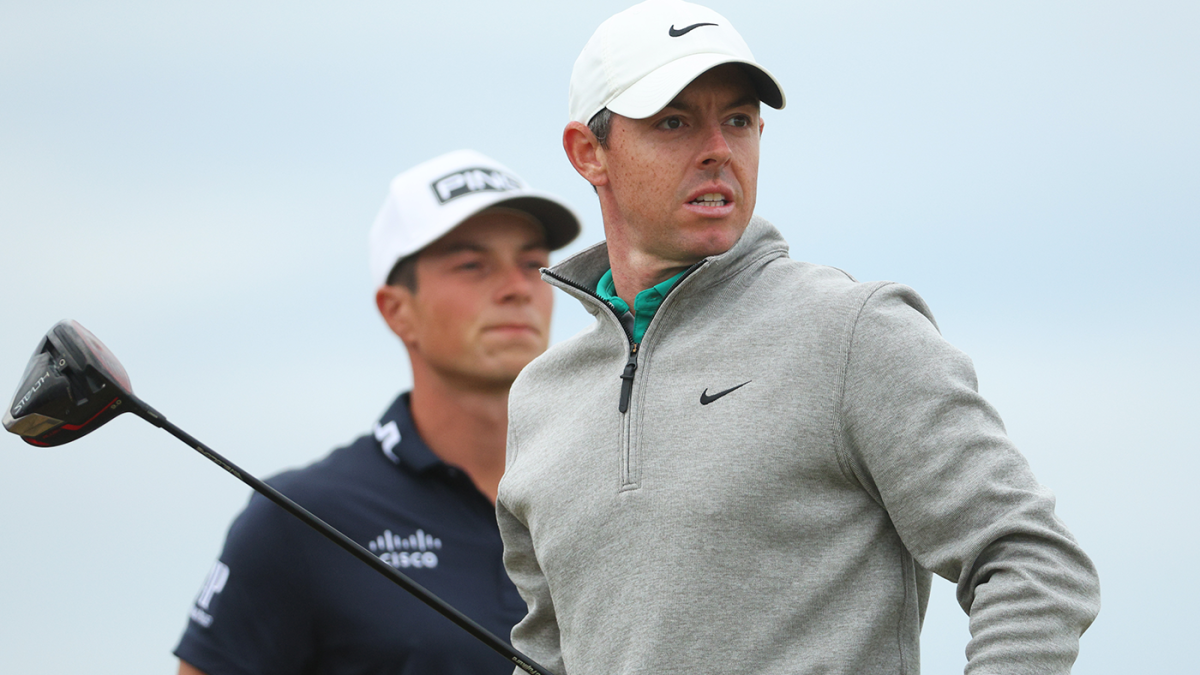 Moving Day at the 150th Open Championship saw the top of the leaderboard take on a completely new shape as Rory McIlroy and Viktor Hovland shot matching 66s to ascend to the top at 16 under. Beginning the day three strokes behind 36-hole leader Cameron Smith, the two players featured in the penultimate group put on a show for the massive galleries surrounding the Old Course at St. Andrews.

Each signing for rounds of 6 under, it was Hovland who threw the first punch as the young Norwegian carded four consecutive birdies on the front nine. Connecting from distance on the greens, the touch which has escaped Hovland for the majority of 2022 appeared to have returned. Turning in 4-under 32, it was the par-4 10th which proved to be a pivotal moment for the two.

From the fairway bunker, McIlroy had the shot of the championship as he blasted his second from the sand and into the bottom of the cup, good for an unlikely hole-out eagle. Hovland was able to convert his birdie opportunity, and the two continued to trade blows on the back nine as each made their way to a 200 score through 54 holes.

“It kind of felt like match play there a little bit. … I knew I just needed to play good golf, and I’m really happy that I was able to shoot a bogey-free round today,” Hovland said.

McIlroy and Hovland will head into the final round with a four-stroke edge over both Smith and Cameron Young ,who struggled on Saturday and sit at 12 under. While they both hold an outside chance to raise the Claret Jug, it’s far more likely that the Champion Golfer of the Year will come from the final pair.

Only four players have previously sat at 16 under through 54 holes at Open Championships. While all have gone on to win the Claret Jug, that statistic will not hold Sunday as either McIlroy or Hovland — if not both — will come up short.

Here is the breakdown of the leaderboard heading into the final round of the 150th Open.

T1. Rory McIlroy and Viktor Hovland (-16): It has been eight years since McIlroy has claimed a major championship, and Sunday will be his best chance to return to the winner’s circle on such a stage in quite some time. The Northern Irishman was nearly flawless on Saturday, plodding his way around the Old Course with a perfect blend of aggression and discipline. The entirety of the crowd — and possibly the world — is rooting for McIlroy to capture major No. 5. Whether that adds pressure or propels him to the history books will be answered soon enough, though Rory has spoken all week about keeping a clear mind and staying within himself so the moment does not get the better of him.

“It’s going to take a lot [of composure to win]. It’s nice that I get to play with Viktor again; we had a good day out there. It’s a comfortable pairing for both of us,” McIlroy said after the round. “So, I’m looking forward to that. I’ve been knocking on the door for a while now, and this is the best chance I’ve had in a long time. I just need to stay in my own little world for one more day, and hopefully I can play the sort of golf that’s good enough to get the job done.”

T3. Cameron Smith and Cameron Young (-12): From the beginning, you knew it was going to be a battle for Smith as he inexplicably three-putted for bogey on his opening hole. Unable to take advantage of the easier front side of the Old Course, the Australian turned in even par and rattled off three consecutive pars to kick off his inward nine. If he doesn’t come back to win this, most will look back to his decision on the par-4 13th that ultimately led to a double bogey. Still, with as much firepower as he possesses, if he can putt Sunday like he did the first two days, he may have an outside chance.

T5. Scottie Scheffler and Si Woo Kim (-11): The world No. 1 had his opportunities to stake his claim on this championship, but the putter simply let him down. His 3-under 69 felt about as bad as Scheffler could have performed as he missed numerous short efforts on the greens. Now five strokes off the lead, Scheffler must still believe he can win this thing if he can get the entirety of his game to cooperate.

7. Dustin Johnson (-10): In total, it was a round of 1 under; however, like Scheffler, it was really a “what could have been” type of day. The two-time major winner shot out of the gate by making birdie on two of his first three holes and began to climb the leaderboard when he made another pair around the turn. That is when the troubles began for Johnson as he carded three bogeys in a four-hole stretch with his putting woes rearing their ugly head. He likely won’t add major No. 3, but crazier things have happened.

T8. Tommy Fleetwood, Matt Fitzpatrick and Adam Scott (-9): Fleetwood is no stranger to going low over the weekend at major championships as he fired a sizzling 63 in the final round of the 2018 U.S. Open. Not quite a record-setting day, but it was a strong effort by the Englishman, who will need more of the same Sunday if he is to pull off a miracle. He was hoping the leaders wouldn’t get too far away from him but making up seven strokes may be too much to ask.

“If [the leaders] don’t get too far away, it will be nice teeing off tomorrow feeling like we have a chance and see if we can get some momentum going on the front nine,” Fleetwood said. “Yeah, it would be very cool and very special to be able to have a go again like down the stretch on a Sunday at The Open.”

T11. Jordan Spieth and Patrick Cantlay (-8): The back nine of the Old Course is playing as the more difficult set, and it has tripped up Spieth each and every day. Now bogey-free and 9 under on the opening half for the week, Spieth has struggled on the back nine, which is where his Open Championship aspirations will come up short. Given his play at the Scottish Open and how he competed at St. Andrews in 2015, Spieth ought to feel a sense of dismay.

T13. Kevin Kisner, Shane Lowry, Tyrrell Hatton and two others (-7): He needed a birdie on the 18th hole on Friday just to make the cut, but now, Kisner finds himself inside the top 20. The biggest mover on Saturday, the Georgia Bulldog shot out of the gate by making birdie on his first three holes and ultimately turning in 6-under 30. Adding another on the 10th, he would go on to play his last seven holes in an even-par fashion. If you told Kisner he would sign for a 7-under 65 — the round of the day — beforehand, he would have been happy, but the composition of his round may actually lead to some disappointment as he let numerous scoring chances run astray.

T18. Bryson DeChambeau, Francesco Molinari, Russell Henley and three others (-6): It was an entertaining morning for DeChambeau as he scratched his plans to play conservatively and let the big dog eat. Pulling driver early and often, the 2020 U.S. Open champion was able to make a move as he was 6 under on the day through his first 13 holes. Failing to take advantage of either par 5, DeChambeau’s double bogey on No. 16 put a halt to any significant movement towards the top of the leaderboard.

“I don’t think you ever know how to play this golf course fully. Every day it’s different,” DeChambeau said. “It showcases a unique golf course each time the wind pops up or doesn’t pop up. It’s just different. I don’t know how to also explain it. You can’t really ever really conquer it. You can’t ever really control it. You’ve just got to go out there and try to take what it gives you and play the spots in the greens where you can and two-putt where you have to.”